Quebec’s separatists should be ignored

Quebec’s separatists should be ignored

FLEEING THE TAINT OF SCANDAL

Candles guttered in the light evening breeze and a jack-o’-lantern on the porch nearby leered suggestively. It was Halloween night, and the residents of a lovingly restored Victorian home in Vancouver’s west end had seized the occasion to decorate their postage-stamp front yard with a mordant tableau of mock graves and spray-on cobwebs. On one eerily realistic headstone the sardonic message read: ‘The NCHS Scandal— and other things that will not stay buried.” The reference to a controversy linking British Columbia’s New Democratic government to the embezzlement of money meant for charity may have gone over the heads of most young hobgoblins out trick-or-treating on Oct. 31. But it took just 15 days for the mock inscription to prove prophetic for hapless B.C. Premier Mike Harcourt. Last week, the 52-year-old politician told reporters gathered in the crypt-like basement of the B.C. legislative building that he would resign as soon as his party chooses a successor. “A new leader,” hoped an emotional Harcourt, “will be free of some of the baggage that I have been harnessed with.”

Harcourt’s action struck even his critics as an honorable attempt to give someone else a chance to rescue his party from impending oblivion. Faced with a succession of disabling controversies almost since his government won election in October, 1991, “Mr. Harcourt has done the right thing,” said Liberal opposition Leader Gordon Campbell, for one. Added Andrew Orr, Harcourt’s former press secretary and now a Victoria consultant: “The party probably now has a better chance.” But even among the premier’s friends there was skepticism that his self-sacrifice would be sufficient to exorcise the numerous problems that continue to haunt his party. Asked whether she felt any relief that the government’s troubles might end with Harcourt’s surprise resignation, NDP backbencher Lois Boone, who represents Prince George-Mount Robson riding, replied: “I don’t think it’s relief, and I don’t think it’s over.”

For most other British Columbians, their premier’s departure seemed merely to signal the start to months of uncertainty and policy drift. At least half a dozen members of Harcourt’s cabinet may launch campaigns to succeed him at a leadership convention that will likely be held next February or March. But any successor will find it difficult to restore the party’s standing in time to avoid defeat in the election that must be called within 11 months. “The NDP is done like dinner,” was the uncharitable assessment

of B.C. Reform party Leader Jack Weisgerber. “The next election is going to be a two-way contest between us and the Liberals to determine who forms the government and who forms the opposition.”

For Harcourt, a lawyer, it was a dispiriting end to nearly a quarter of a century spent in pursuit of political consensus. First elected as a Vancouver aiderman in 1972, he became the city’s mayor in 1980. As chief magistrate, he ran city hall with amiable pragmatism until he left to take over the provincial NDP in 1986, basing his appeal to party delegates on his middle-ground “winnability” in contrast to his more ideological opponents. In 1991, he led the party to a landslide victory over the Social Credit party, which had been left discredited and demoralized by the forced resignation six months earlier of disgraced premier William Vander Zalm, found guilty of violating

His government’s honeymoon lasted just seven months. In May, 1992, The Vancouver Sun published the first allegations that the Nanaimo Commonwealth Holding Society (NCHS), an association founded in 1954 by a predecessor to the NDP, had diverted money raised at bingo games and supposedly meant for charity, to other purposes. Harcourt denied that any links existed between the society and his party—but ordered a provincial investigation into its affairs. Even as that investigation—and a second one launched by the RCMP—proceeded, the premier’s credibility skidded badly on another front. In August, 1992, Harcourt’s willingness to trade away future B.C. representation in the House of Commons as part of the Charlottetown constitutional accord won him the derisory nickname of “Premier Bonehead’ —an unflattering tag he was never able to shake.

Over the next three years, Harcourt’s government assembled a respectable legislative record. But whatever political credit it might have received in return evaporated in a string of embarrassments and injudicious initiatives. Extravagant budgets in 1992 and 1993 that raised taxes by more than 25 per cent angered middleclass supporters who had expected Harcourt to follow a more moderate course. Progressive legislation aimed at reining in the most destructive practices of the B.C. logging industry and limiting clear-cuts ended confrontations with environmentalists in places like Clayoquot Sound. But that was overshadowed by the dismissal of one cabinet minister, Robin Blencoe, over allegations of sexual harassment and another, Moe Sihota, after he was found guilty of professional misconduct during his practice of law before he entered politics. As the embarrassments accumulated, Harcourt’s reputation for managing by consensus mutated into an impression of indecisiveness.

‘A new leader will be free of some of the baggage’

That perception reached critical proportions in the face of the one scandal that refused to go away. Like a virus that the government could not shake off, the NCHS controversy—dubbed “Bingogate” by unsympathetic columnists— kept returning to public attention as a series of investigations shed an ever-more penetrating light on the Nanaimo society’s activities. Finally, last month, the release of a forensic auditor’s report disclosed that the NDP-linked society had diverted almost $60,000 earmarked for charity to a party newspaper, and had also used charity funds to pay for B.C. delegates to attend a national leadership convention in Winnipeg. It had also violated party policy by disguising the source of hundreds of thousands of dollars in corporate donations. In practice, the report declared, the Nanaimo society had “acted as a bank for the NDP.”

Harcourt reacted by naming yet another party committee to examine the auditor’s report— a waffling response that seemed finally to crystallize his own party’s mounting impatience with his leadership. On Oct. 26, Harcourt felt compelled to sack his housing and consumer affairs minister, Joan Smallwood, after she criticized his handling of the affair. Asked the same day by reporters in Victoria whether he had considered stepping down himself, Harcourt snapped: “I’m not going to resign. I believe what I’ve done is right. I’m prepared to be judged on that.”

But in fact, the thought of quitting had by then been on Harcourt’s mind for months. In statements late last week, he acknowledged that he had been toying with stepping down ever since last May, when he came under fire for awarding $5 million worth of government advertising contracts, without tender, to a company owned by a former campaign aide. Although an investigation cleared him of any conflict of interest and he remained personally untouched by any of the other scandals around his government, Harcourt said last week that the mounting criticism of his leadership had “taken its toll on me personally, on me politically, and most importantly on my family.” He added that his priority had shifted from politics to his wife of 24 years, Becky, and his 15-year-old son, Justen. While denying any bitterness, Harcourt said that aggravation had come to exceed the pleasures of his office, telling one interviewer: “I do not need this.”

More than one of his cabinet may feel differently. Leading the list of those who may bid for Harcourt’s job is Employment and Investment Minister Glen Clark, who turns 38 this week. Aggressive and keenly intelligent, the former labor organizer is considered to be a hawk among cabinet leftists. Labor Minister Dan Miller, 50, could mount a candidacy closer to the political centre. The same is true of Finance Minister Elizabeth Cull, 43. Speculation has also centered on veteran Kamloops MP Nelson Riis, 52, who could assume the leadership free of any taint of association with the Harcourt government.

Whether any of those potential replacements would be capable of restoring the NDP’s lustre in time to win the next election, however, is doubtful. For one thing, several of them would bring considerable political baggage of their own to the premier’s office. Clark, for one, was the author of the NDP’s first two, hugely unpopular budgets, and he has not shaken off his tax-and-spend image.

Miller, a former forestry worker, is viewed as unsympathetic to the party’s feminist wing. Cull, while more fiscally conservative than Clark, mishandled the NCHS report when it was first presented to her last June, by revealing details to senior party officials before the RCMP had concluded an investigation into its contents. Even the relatively untarnished Riis would face an uphill task in overtaking Campbell’s Liberals, who outpolled the NDP 2 to 1 in an Angus Reid survey taken a week before Harcourt’s resignation.

More certain is that the B.C. government will avoid making any major decisions until at least after a new leader is chosen—and more likely until after a general election. That could delay hard decisions on next year’s provincial budget, as well as on such pressing issues as the settlement of native land claims and British Columbia’s position on any proposed constitutional settlement with Quebec. “The timing is bad for the NDP,” observed University of Victoria political scientist Norman Ruff, “and in terms of public policy, the timing is extremely bad.”

But to Harcourt last week, there appeared to be little choice. His private soundings of trusted party contacts, insiders said, had found no one who urged him to stay on. Indeed, among all the public tributes from party loyalists, none suggested that he had made a mistake by deciding to step down. In a telling phrase, Municipal Affairs Minister Darlene Marzari, a long-standing friend, calls the B.C. premier “a politician who led from the middle.” It was a style that served Michael Harcourt well for more than two decades. But in the end, it left the man in the middle with no room to distance himself from the mistakes of those around him. 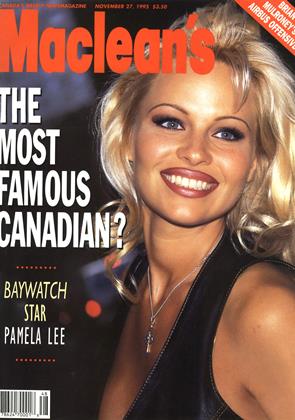