Sex offenders: Is there a cure? PAUL KAIHLA February 13 1995

He has the soft look of an overgrown child, a person accustomed far too long to the protection and supervision of a parental authority. But there is nothing innocent about Steve, who agreed to talk to Maclean’s on condition that his real name not be used. The middle-aged man, who favors a baseball cap on which sweat and sawdust have combined to form a casing of grime, once killed a 19-year-old girl in a sex attack by slashing her throat with a jackknife. Later, he raped a 15-year-old and strangled her to death. Before police finally arrested him, he had managed to commit a trio of other sex offences, one of which ended in a third murder. Found not guilty in the string of crimes by reason of insanity, he is now nearing two decades of incarceration at a maximum security psychiatric prison. In spite of having received the best treatments available in the penal system for almost all of his adult life, Steve is not much closer to rehabilitation—or release—than he was when he last glimpsed the outside world in 1976. “I can’t

say enough good things about this place,” he says, “but I still have problems.” In fact, Steve’s lack of progress is typical for a criminal of his class. Two centuries after the birth of modern psychiatry, there are many types of treatment for sex offenders but no consensus on how well—or even whether—they work. “We don’t seem to be having much of an impact on them,” concedes Larry Arnold, a forensic psychologist at the Oak Ridge facility for the criminally insane in Penetanguishene, Ont. That stark reality underlies the heated public and political debate over the sentencing and early release of sex offenders—and raises an alarm each time a rapist or child molester walks back into a community. One of the most frenzied recent outcries was over the case of Wray Budreo, a pedophile with 22 convictions for sex offences over 32 years who was released from Kingston Penitentiary late last year. Reporters and protesters besieged the Peterborough, Ont., house where the 50-year-old Budreo stayed before he moved to Toronto, and then disappeared from public view. Responding to such anxieties and pas-

sions, Justice Minister Allan Rock and Solicitor General Herb Gray will spearhead an attempt this spring to draft a new law that would extend the detention of violent offenders, including sex offenders, if tests showed that an inmate was not rehabilitated at the end of his or her jail sentence. Gray is also seeking measures to improve information sharing among police forces so that local authorities can track violent offenders, and predators like Budreo, with greater accuracy once they are released. Advocates of putting more resources into the treatment of sex offenders, meanwhile, argue that keeping such criminals in prison for longer terms will only escalate costs. The expense to taxpayers of housing a serial rapist, for example, in a maximum security prison for one year is now more than $70,000, compared with the annual cost of $9,400 to supervise him while on parole. Under current law, a sex offender can be detained beyond a jail sentence if a psychiatrist signs a certificate saying that the inmate suffers from a mental disorder that would likely result in serious injury to others. The

inmate is then involuntarily committed to a facility such as the one where Steve resides, at an even greater cost to the public: about $140,000 a year. “Locking them up is no solution because we could be using that money for other health-care costs,” declares Howard Barbaree, head of the forensics division at Toronto’s Clarke Institute of Psychiatry and an expert in the treatment of sex offenders.

But in terms of treatment, Canada already spends a considerable sum—$11 million annually—on dozens of programs for sex offenders. About 5,000 of the 23,000 convicts in the federal corrections system have sex crimes on their record. According to Barbaree, those offenders fall roughly into two equal groups: rapists and child molesters. Federal officials proudly point to government statistics showing that only six per cent of sex offenders repeat their crimes within three years of their release from

prison. But researchers who study sex offenders say that the recidivism rate jumps to about 50 per cent when the criminals are tracked over a decade.

Optimists such as Barbaree say that while treatment is unlikely to fully reform all sex offenders, it can at least lower the average recidivism rate. Barbaree, who is also a professor of psychiatry at the University of Toronto, oversees a treatment program for sex offenders at Warkworth penitentiary in Brighton, Ont., where about half of the 670 inmates have committed sex crimes. He offers “cognitive-behavioral therapy” to groups of a dozen or so inmates at a time for three hours each weekday over five months. “We try to change the attitudes and beliefs which justify sexual offences—‘the victims are to blame,’ or ‘children have sexual motivations to seek out adults for sex,’ ” says Barbaree. “Often, explaining how the victim is affected by crimes is news to these people.” He also tries to teach relapse-prevention therapy, or how to avoid situations that have led to trouble in the past. For a predator with a history of stalking victims in a car at night, that could mean something as simple as stopping himself from driving alone to the store after dinner to pick up milk.

In a journal article in the Clinical Psychology Review in 1991, Barbaree and four colleagues wrote that such treatment, combined with drug therapy, was effective with child molesters. But that conclusion was attacked two years later in the Journal of Interpersonal Violence by two professors at Queen’s University, Vernon Quinsey and Martin Lalumière, and a pair of researchers at Penetanguishene’s Oak Ridge facility, Marnie Rice and Grant Harris. The article said that studies on reducing recidivism rates of sex offenders were contradictory. “Nobody that I know of has any data suggesting rapists’ recidivism can be affected,” says Harris. ‘Treatment may work for child molesters, but we can’t prove it. That isn’t to say that we should give up and stop trying.”

A treatment that does have concrete results is chemical castration, which about 10 per cent of sex offenders undergo in varying degrees. It involves taking a class of drugs called anti-androgens by tablet or injection. It reduces the level of the male hormone testosterone, but the side-effects are drastic: enlarged breasts, thinning of pubic hair, atrophied testicles and weight gain. The main impact, though, is a reduction in a man’s sex drive and sexual fantasies—and even the elimination of erections. Sometimes, parole is made conditional on an inmate consenting to take anti-androgens. Says Barbaree: “The patient can make an informed decision between staying in jail and off the medication, or being released on the medication. For some offenders, you want them on it.”

Steve’s flabby frame is a testament to the 20 or 30 lb. he says he gained when he volunteered to be “a guinea pig” and take the anti-androgen Provera. “I discontinued it because we got my fantasies and masturba-

tion down to nil,” says Steve. “How much of that was medication and how much was my own willpower, who is to say? I’m still not masturbating and fantasizing, even though I’ve come off it.” Meanwhile, the serial killer has developed considerable skills as a craftsman over the years in his facility’s wood shop, and he says it has played an important part in his personal growth. Steve makes ornate wooden toys and furniture, which he donates to local charities for auction at fundraising events. He shows off a well-kept album of photographs and news clippings of his creations, as well as letters of thanks from various organizations.

Steve has also had his share of relapse-prevention therapy. But in spite of outward signs of progress, his minders say that he has essentially not changed much during his 19 years of incarceration. According to his most recent diagnosis, Steve suffers from two psychosexual disorders and is also classified as a sexual sadist and a psychopath.

The latter designation is all-important, says University of British Columbia psychologist Robert Hare, author of the critically acclaimed book Without Conscience: The Disturbing World of the Psychopaths Among Us. According to Hare, about half of all violent serial rapists are psychopaths and it is essential to identify them within a prison population because their recidivism rate is three times that of non-psychopaths. Hare says that many treatment programs now being offered in Canadian prisons, including counselling that tries to foster empathy for the victim, as well as some types of cognitive-behavioral therapy, are not only a waste but could be harmful. “Psychopaths love touchy-feely programs because they can mimic the appropriate responses and con a therapist into writing a report that they’ve passed with flying colors,” says Hare. “It gives a false sense of security that they’ve been rehabilitated.”

Often charming and convincing, a psychopath is primarily concerned with self-gratification, and displays a stunning lack of empathy over the injury he or she inflicts on others. Not all psychopaths are in jail. Some may express their antisocial impulses not as sex offenders but as unethical stock promoters or combat-hungry soldiers. In 1992, the federal government commissioned Hare to draft an experimental treatment program that would include psychopaths, but officials in the corrections department have so far not implemented the professor’s 50-page report. “You’re not going to change a psychopath’s attitudes because he is fixed,” Hare declares. “We can only appeal to their self-interest and show them how to break the chain of events which leads to being locked up.”

Whether it is for lack of action or a lack of solutions, the treatment and sentencing of dangerous sex offenders is an issue that will remain high on the political agenda. As for Steve, who is still not about to be recommended for release, it may be a long time indeed before he sees the outside world again. □ 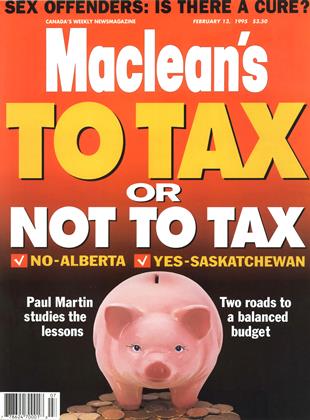