The federal government unveiled new rules designed to make it easier to fire patronage appointees who demonstrate incompetence. Under the proposed changes, more cabinet appointees will serve “at pleasure,” meaning they can be fired at any time for any reason. The government will limit “good behavior” appointees, who can be dismissed only for just cause, to public offices requiring independence and impartiality.

The Quebec Human Rights Commission said that dress codes in public schools that ban the wearing of the hijab, or Islamic scarf, are discriminatory. The hijab issue was sparked by the enforcement of the dress code at a Montreal high school last September that led to a student wearing a hijab being asked to leave. The school’s parents’ committee recently decided to reconsider its controversial dress code.

U.S. Ambassador James Blanchard said in Ottawa that President Bill Clinton will meet with Bloc Québécois Leader Lucien Bouchard as well as Reform party Leader Preston Manning on his first state visit to Canada, scheduled for Feb. 23 to 24. But Blanchard emphasized that the meetings will be routine matters of courtesy and are not intended to highlight “political disagreement in Quebec.”

Kevin McTaggart, a 36-year-old former Canadian Forces airman who served in the 1991 Persian Gulf War, said he plans to sue the federal government over socalled Gulf War syndrome. McTaggart, who says he suffers from muscle spasms, joint pain, short-term memory loss, irritability and fatigue, claims that because of his illness he has been unable to hold a steady job since he left the Forces in 1993. Dozens of Canadian veterans of the war have described a variety of symptoms they attribute to their service, as have thousands of U.S. military personnel.

In a victory for the rights of disabled people, the Ontario Court of Appeal ruled that 10-year-old Emily Eaton of Brantford, Ont., who has cerebral palsy, must be integrated into a regular classroom with children her own age rather than segregated in special classes as ordered by the Brant County Board of Education. The court held that forcibly segregating a disabled child is a violation of charter rights.

MUSH, MUSH, MUSH!: A dogsled team driven by Bob Holder of Fairbanks, Alaska, arrives in Dawson City, Yukon, in seventh place at the halfway point in the Yukon Quest International Sled Dog Race. Seventeen mushers qualified for the second leg in the 1,600-km race between the territorial capital of Whitehorse and Fairbanks.

Despite intense pressure from opponents, Justice Minister Allan Rock tabled his longawaited firearms-control legislation in the House of Commons. Under the bill, a key plank in a Liberal anti-crime strategy, a national registry will be set up for the country’s estimated seven million firearms, including hunting rifles and shotguns. The initiative is expected to cost $85 million.

Canadians will have five years, starting in 1998, to register their weapons. After that, possession of an unregistered gun could result in a fine of $2,000, a criminal record, and, in serious cases, up to five years in prison. The law also bans a wide range of weapons, including military and paramilitary rifles and some handguns; cracks down on gun smuggling; and stiffens penalities for using a firearm in the commission of a crime. Gun owners, Reform MPs and some Liberal backbenchers claim that the legislation goes too

far and question whether it will actually reduce crime. The Bloc Québécois argues it is not harsh enough.

A case of mercy

Jean Brush, 81, of Stoney Creek, Ont., pleaded guilty to manslaughter in the August, 1994, killing of her husband of nearly 58 years, Cecil. Brush testified that the 81-year-old man had pleaded to die because he had advanced Alzheimer’s disease. “He said, ‘Jean, please do something, do something,’ ” she told the Ontario Court, provincial division, admitting that she stabbed her husband twice before stabbing herself five times. The couple’s only daughter, Joan Myers, 56, later found them lying together on a blood-soaked blanket on their dining-room floor, holding hands. Brush, who said that she regretted surviving the suicide attempt, will be sentenced on March 2. 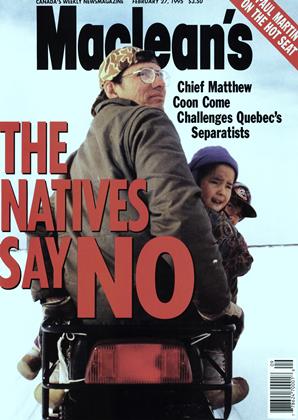