In the world of international diplomacy, a little thing can say a lot. When Quebec Premier Jacques Parizeau visited the French National Assembly last week, he entered through the ornate Napoleon Gates—and French officials were at pains to stress that he was the first foreign visitor to use the gates since American president Woodrow Wilson in 1919. The president of the Assembly, Philippe Séguin, went further than most senior French politicians have gone in recent years in hinting at his support for Parizeau’s plans to lead Quebec to independence. France, he told Parizeau in remarks that obviously pleased the Quebec premier, “will march by your side at the speed and in the direction you choose.” Throughout his four-day visit to Paris, Parizeau seized every occasion to lay out his case for Quebec sovereignty. Aware that the French government would not, and could not, publicly take sides on the issue of Quebec’s future, Parizeau asked only that the French agree to speedily recognize an independent Quebec if the province’s voters hand him a mandate for sovereignty in the upcoming referendum. By limiting his objectives, the premier was able to obtain pretty much what he wanted. In the key political encounter of the visit, French Prime Minister Edouard Balladur appeared to promise that

France would provide Quebec early recognition if the Parti Québécois government wins its referendum. After Parizeau asked Balladur, a candidate for the French presidency this spring, to recommend to the next president that France “approach with sympathy the new country that will appear,” Balladur replied with elaborate caution yet unmistakable meaning: “The premier, Mr. Parizeau, has just made recommendations. I have no doubt they will be followed.”

From the outset, Parizeau sought to reassure the French with his cautious demeanor—a sharp contrast to French memories of his tempestuous predecessor in campaigning for Quebec independence, René Lévesque, who visited Paris in 1977. While Parizeau unveiled a plaque in the National Assembly commemorating Lévesque’s visit, he carefully stressed that both Quebec’s leadership and the times have changed enormously since the failure of Lévesque’s own referendum on independence in 1980. “Quebec’s sovereignty is far more possible today than ever,” the premier told a meeting of the French employers’ association.

Parizeau also managed to spark a low-key spat between Canadian officials in Paris and Séguin, the Assembly president who gave him the warmest endorsement of all the French politicians he met. The day before

Parizeau visited the Assembly, Canadian Ambassador Benoit Bouchard attempted to pre-empt Seguin by portraying him to Quebec reporters as a “loose cannon” in French politics—and added for good measure that most of the leaders Parizeau would be meeting would not be in power in six months because of the impending French elections. In Ottawa, the Bloc Québécois immediately demanded that the government fire Bouchard for offending Séguin. Foreign Affairs Minister André Ouellet brushed off the protest, but Bouchard thought it best to make a formal apology to Séguin, saying that no offence had been intended. Séguin replied with magnificent disdain: “To be offended, I would have had to be listening.”

&lt Parizeau also scored well in the I French news media. His visit reh ceived wide coverage in leading 5 newspapers and on television, in 1 sharp contrast to the meagre attention paid to Prime Minister Jean Chrétien’s two-day official visit to Paris in early December. Much of the attention focused on Parizeau himself, who had been virtually unknown to the French public, but the business press also examined the chances of a sovereign Quebec making it economically. The influential business daily La Tribune Desfossés summed up in a headline: “Quebec has the wherewithal for ‘sovereignty.’ ” And Parizeau got another boost when 30 writers and intellectuals, led by prominent authors Max Gallo and Jean Dutoud, issued a public “appeal” in favor of Quebec sovereignty.

Most heartening for Parizeau, however, was his reception at the Hôtel Matignon, Balladur’s official residence. Balladur is the runaway favorite to succeed President François Mitterrand—who is ill with prostate cancer and who made no public comment after meeting Parizeau over lunch—after elections in May. The prime minister spent a few moments in private with Parizeau before the two men emerged to sign an accord renewing scientific, technical and cultural co-operation between France and Quebec. That was when Parizeau made his convoluted appeal to Balladur that the next president support early recognition of a sovereign Quebec, and won Balladur’s sympathetic response. Balladur’s adviser on international affairs, Bertrand Brigouleix, later left little doubt that France would heed Que bee’s call. “If the referendum’s answer is Yes to sovereignty, they can expect France’s recognition and support,” he said. The outcome was as much as Parizeau could have hoped for. Still, as Chrétien pointed out to re porters during his own tour of South America last week, the battle for sovereignty is being fought at home—not in the salons of Paris. 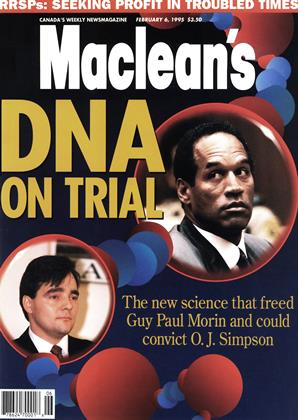