It was a time in Canada, in the years following the Second World War, when everything seemed possible. Returning from the battlefields of Europe, the country’s best and brightest came to Ottawa to help construct a modem and benevolent land. They would provide seed money for new industries. They would mould a vibrant and unique culture. Above all, they would create a society that was compassionate and generous. Gordon Robertson, who ran the federal bureaucracy as cabinet secretary for prime ministers Lester Pearson and Pierre Tmdeau, and who had worked before that for John Diefenbaker and Louis St. Laurent and Mackenzie King, was one of the architects of that vision. Sitting in his sun-filled study in Ottawa’s Rockcliffe district last week, he recalled that hardly anyone was worried about the cost in those days. In fact, he recalled, the only cautionary note about whether the country could actually afford what was being created came from Robert Bryce, thendeputy minister of finance, at a committee meeting of Pearson’s cabinet. In the end,

“It took about 30 years for Bob Bryce to be proven right,”

The final confirmation that Canada cannot afford to be what it aspired to be, came last week. Finance Minister Paul Martin delivered a budget that he declared would finally begin to put Canada’s finances in order after decades of rising deficits and national debt. “In this budget,” he told sombre MPs in his budget address, “we are bringing government’s size and structure into line with what we can afford.”

Even for Canadians used to budgets that hurt, Martin’s budget was tough: a $25.3billion cut over three years;

45,000 fewer people on the federal payroll. There will be less money for such once-sacred Liberal totems as social programs, regional development and the CBC (page 26).

Petro-Canada and Canadian National Railway will cease. And even the familiar two-dollar bill will disappear, to be replaced by a coin. Martin also pointed to future revision of pensions, unemployment insurance and cultural agencies. For the upcoming 1995-1996 fiscal year, a combination of $4 billion in cuts and $900 million in tax increases will leave a deficit of $32.7 billion and $24.3 billion the following year. It was, Martin told Maclean’s in a post-budget interview, a complete rethink of how Ottawa functions (page 23).

It was also a budget that smashed many of the cherished icons of past Liberal governments. That it was Paul Martin Jr. who was doing much of the smashing, however, made it that much more dramatic. As a senior Liberal cabinet minister, his father and namesake worked with Gordon Robertson and the others to construct the welfare state that Martin has now started to dismantle. In his memoirs, A Very Public Life, the late Paul Martin recounted his fights with King. “King always considered himself the guardian of the public purse,” Martin Sr. grumbled, never thinking that his son might some day feel the same way. But in both his budget speech and his interview with Maclean’s, Martin insisted that he was, in fact, doing what was necessary to keep his father’s legacy alive—protecting social programs from erosion by ever-rising interest payments on the national debt. Interest payments for the 1995-1996 fiscal year, which begins on April 1, will consume $49.5 million, up from $42 billion this year. That is more than the total spending on pensions, unemployment insurance, health care, welfare and postsecondary education. In fact, that increase in interest payments frQm this year to next almost matches Ottawa’s spending on equalization payments to poorer provinces. “For all of us who care for the social fabric of this country,” Martin told the House of Commons, “the state of the nation’s finances simply has to be addressed.”

Many of those who watched the Liberals attack Conservative Leader Kim Campbell during the 1993 election campaign over her promises to erase the deficit found that turnaround hard to swallow. They include such prominent Liberals as Montreal MP Warren Allmand and Toronto MP Charles Caccia, both of whom were cabinet ministers in the Trudeau era. While Caccia remained grimly silent in public, Allmand took his complaints beyond the closed doors of the Liberal caucus—despite a dressingdown last week from cabinet ministers and fellow MPs. “Some of the measures in the budget are wrong and not in the tradition of the Liberal party,” he said. But few other Liberals joined the ranks of the critics, indicating that Martin’s budget has widespread—if grudging—support in the caucus. As Manitoba backbencher Marlene Cowling said after Martin spoke in the Commons: “This has been a tough budget, but it had to be done.”

But the budget was more than just a move to bring the federal government closer to its goal of eliminating the deficit. It also marked a continuation of the Liberal party’s return to what one strategist called the “pragmatic centre,” back to where it sat until the governments of Pierre Trudeau and John Turner. It is a place where Prime Minister Jean Chrétien clearly believes his party should be, a view he has signalled for several years and underscored by his choice of Mitchell Sharp as his mentor and adviser. It was Sharp as finance minister in the Pearson government (with Bryce as his deputy), who advocated a postponement of universal health care until the program could be paid for. The clearest sign of a new path, according to many Liberal observers, came not in Martin’s budget

last week but at a 1991 party conference in Aylmer, Que. ‘When we form a government,” Chrétien said in his remarks opening that session, “we cannot begin from where we left off in 1984.”

One indication of how thoroughly Chrétien and Martin have progressed with their renovation of Liberal doctrine was the announcement that all immigrants, including refugees, will be charged a $975 fee for the right to make Canada their home. For a family of four, it will now cost $3,150 to enter Canada. That represents a significant departure in policy for a party that has traditionally relied on the political support of grateful immigrants, who were initially invited to Canada in large numbers by Clifford Sifton, Wilfrid Laurier’s interior minister. And the measure plainly outraged immigrant groups, which denounced the new fee structure as the reimposition of the so-called head tax once levied on Asian newcomers.

Another familiar symbol of Liberal economic policy is PetroCanada, the centrepiece of Ottawa’s intervention in the private sector during Trudeau’s regime. In 1991, the Tories sold 30 per cent of the company, Canada’s second-largest integrated oil company. Now, the Liberals will dispose of the remaining 173 million shares when the market provides a favorable opportunity. The government also plans to shed the Canadian National railway system, nationalized by both Conservative and Liberal administrations after the First World War. Transport Minister Doug Young, an enthusiastic promoter of the new Liberal agenda, said that he hopes the railway, which government officials expect to show a profit of $250 million this year, will be in private hands by year-end.

A key inheritance of past Liberal governments, with pressure from the New Democratic Party and its Co-operative Commonwealth Federation (CCF) forebear, is the country’s social safety net. But as much as Martin insists that he is ultimately trying to preserve social programs, that net will become slightly more frayed because of his budget (page 23). The biggest change is that, beginning in 1996-1997, federal funding for health care, postsecondary education and welfare will be rolled into something called the Canada Social Transfer, which will come with fewer strings attached. Compared with 1995-1996 levels, the provinces will get $2.5-billion less in the first year of the new transfer and a $4.5-billion reduction in the second year. The provinces cried foul. Saskatchewan Premier Roy Romanow told Maclean’s that social programs will become an uneven patchwork across the country.

The modification of other social programs is also in the works, including changes to unemployment insurance that the government says will shave a minimum of 10 per cent and save $700 million. But the most potentially controversial step is a reform of the entire pension system slated to take effect in 1997. It was pension reform that deterred the Tories from significant social policy changes in their mandate. The Liberals’ proposed revision follows the pre-budget release of a report that demonstrated that the Canada Pension Plan will be bankrupt by 2015 unless contribution rates are doubled from current levels.

Romanow has his doubts. The Liberals, he contends, should more clearly define the core goals of the federal government and then cut from there. Still, Romanow, whose government has just introduced a balanced budget, concedes that battles about reinventing the role of government will become much more commonplace in the future. “There is no choice in dealing with the public debt. For me, the politics of the 1990s is the politics of dealing with the debt,” he said.

For a long time, Gordon Robertson admits, he thought that Robert Bryce was wrong. He believed—like many others—that Canada’s future was so golden that everything was affordable. He has long since changed his mind, although he cannot remember exactly when that shift took place. “It did get beyond what we can afford,” he said. “And it isn’t a betrayal to go back to what we can afford.” 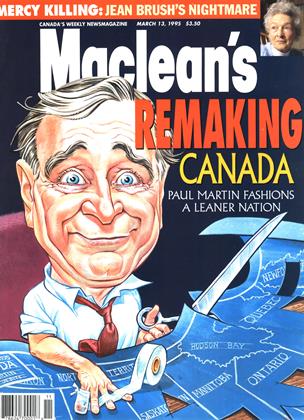