Publishers, broadcasters, artists, filmmakers and performers across the country, jittery about the deficit-bashing mood in Ottawa, braced themselves in the weeks leading up to the landmark Feb. 27 federal budget. But they felt a sense of relief on budget day when they first looked at the reductions, which seemed relatively benign. It took a couple of days for the extent of the devastation to become clear— most notably the fact that by 1998, the CBC will be operating with a $350 million reduction, or one-third of its current $1.1-billion budget. The reduction is a result of $170 million in cuts imposed by Finance Minister Paul Martin, $100 million of reductions imposed earlier by the Mulroney government and additional shortfalls. “A lot of this year’s cuts are layered on top of cuts announced in previous budgets, so the combined effect is very damaging,” says Canadian Conference of the Arts national director Keith Kelly, whose own broad-based lobby group will suffer from a 50per-cent funding reduction to national arts service organizations. “We’re in the very early days of this, and we’re trying to get a handle on the casualties.”

Certainly, by 1998, virtually every area of the arts will feel the impact of a projected 24per-cent cut to the department of Canadian heritage. The gigantic, $2.9-billion portfolio, which funds everything from arts and broadcasting to amateur sports and national parks, will decrease its spending by $676 million over three years. As well as the CBC, several other of the 14 major cultural organizations under the department—including the National

Film Board, the National Library and the National Arts Centre—took substantial hits. The budgets of the country’s four national museums will also be reduced, by an average of 20 per cent over three years, threatening programs across the country. The $77.5-million postal subsidy—the lifeblood of the Canadian magazine industry because it discounts mailing rates to subscribers, including those of Maclean ’s—will be reduced by 24 per cent over two years. Other programs were drastically slashed in one fell swoop: two book publishing funds were cut by 55 per cent in one year.

Meanwhile, the Canada Council, which supports a broad range of cultural groups and individual artists, received a relatively light 2.6-percent, one-year cut to its $98-million budget. However, after a decade of federal slashing, it announced plans for a scaled-down operation two days after the budget was tabled. The measures include reducing administrative costs from $22 million to $12 million and dismantling the Art Bank, which buys and rents out original Canadian works. Under the new plan, the council will cease its $3.1-million combined contribution to the budgets of The National Theatre School of Canada and the National Ballet School.

In light of the massive cuts to federal transfer payments and social programs, Ottawa’s receding role in the arts sphere is widely seen as relatively insignificant. Indeed, while Heritage’s projected three-year cuts total $676 million, the departments of defence, natural resources and industry will be scaled back in the same period by $1.6 billion, $1.5 billion

and $1.4 billion respectively. Still, while some politicians portray culture as a fringe activity limited to urban elites, the arts and cultural sectors in 1992-1993 employed 660,000 people directly and indirectly, with a $23.8 billion contribution to GDP.

To many in the culture sector, the cuts amount to economic shortsightedness. Says author Pierre Berton: “People can’t get into their heads that what you invest in ballets or theatres or movies, you’re investing in the future of the country, the future Karen Kains, the William Hutts, who are going to give this country pride—and money. This whole budget is the thinking of dumb backbenchers who think artists are lazy and should be digging ditches instead of painting pictures. And some dumb frontbenchers, too, I might add.”

Telefilm, established in 1967, invests in domestic films and TV productions. Recently, it contributed backing for Atom Egoyan’s hugely successful Exotica and the pilot for the TV series Due South. But as a result of Martin’s budget, its $122-million budget will drop 10.3 per cent in one year, with more cuts on the horizon and yet another review of its mandate. Veteran film-maker Bemie Zukerman, co-producer with Montreal’s CINAR Films of blockbuster TV movie Million Dollar Babies: The Dionne Quintuplets, received $1.2 million of the drama’s $9.6-million budget from Telefilm. “It plays an absolutely essential role in domestic production, particularly in the early stages when scripts are being developed and

deals are being put together,” says Zukerman. Million Dollar Babies aired simultaneously last November on CBC and on CBS, drawing 6.3 million viewers in Canada and 42 million in the United States over two nights. ‘Telefilm will get that money back from Million Dollar Babies,”

Zukerman points out. But he also notes that Telefilm is “especially critical for young producers and directors trying to establish themselves.” Canadian television productions and—to a lesser extent, films—are increasingly gaining ground abroad. Many domestic magazines, however, have to fight hard to hold their own at home. Because Canadian newsstands are dominated by foreign publications, Canadian periodical publishers have necessarily become experts in subscription sales. And the postal subsidy, which guarantees reduced mailing rates for magazines and community newspapers, has been an essential aid to the industry. Catherine Keachie, president of the Canadian Magazine Publishers Association (CMPA), says that the $19 million due to be trimmed from the $77.5-million fund over two years is a “staggering” blow. Adds Keachie: “We will have gone from $220 million in 1988 to $58.7 million in early

1997.” And she fears that a new program to replace the subsidy will be built around a greatly reduced base figure—thereby crippling the domestic magazine industry.

The award-winning children’s magazines OWL and Chickadee, like most Canadian periodicals, say they depend on the postal subsidy for their continued success. Publisher Diane Davy notes that increased mailing costs mean that publishers have little option but to pass those on to consumers. “We know from experience that if you increase your price by any percentage, the percentage of your readership drops by the same amount,” she adds. “We saw that happen with the GST.” Davy’s magazines, which have a combined circulation of 200,000 in Canada and 75,000 in the United States, are approaching their 20th anniversary. “But it just seems to get harder and harder,” Davy says. “All those accolades we’ve won don’t seem to translate into bucks on the bottom line.” The story is much the same for book publishing, which derives some of its support from Heritage programs. “We’ve been cut by 55 per cent in one year,” says Bill Hamum, president of the 145-member Association of Canadian Publishers (ACP). The Book Publishing Industry Development Program and the Publications Distribution Assistance Program together dropped to $20 million from last year’s $44 million. “It’s devastating,” adds Hamum. “Some smaller companies will no longer be able to function.” Heritage officials gave his association no warning of the severity of the cuts, he added. “We were completely taken off guard,” he says. One ACP member that expects to feel the cuts deeply is Cormorant Books, a small literary publisher based in Dunve-

gan, Ont., 80 km east of Ottawa. Established in 1985, specializes in adult fiction, a notoriously difficult area in which to profit. Its stable of authors includes Nino Ricci, whose Lives of the Saints won the 1990 Governor General’s Literary Award, Charles Foran, whose Kitchen Music has been nominated for a SmithBooks/Books in Canada First Novel Award, and Oakland Ross, whose short-story collection, Guerrilla Beach, is shortlisted for Ontario’s Trillium Award. “These cuts come at a time when paper costs are going up 40 per cent, when there is still a GST imposed on books,” says Cormorant publisher Jan Geddes. But more is at stake than just the future of her own firm, she argues—small literary presses provide the fertile ground where young writers build an audience. “We launch new writers, and I think that function is quite critical,” she says. “These cuts mean a reduction in the possibility of introducing a fresh new literary voice. You’re not so willing to take a chance on something that might have a limited market because of its originality.” Meanwhile, the country’s national museums say they may have to cut vital cross-country services, making them too “Ottawa-centred.” And smaller institutions are concerned about the 20-per-cent reduction to the Museums Assistance Program (MAP), from $12.7 million to $10.2 million. Frank Milligan, director of the New Brunswick Museum in Saint John, says that MAP, which funds special projects, travelling exhibitions and educational programs, accounts for roughly nine per cent of his institution’s $1.8-million budget. “For us, it’s vital,” he says, adding that the money allows his staff to assist smaller museums and permits its programs to reach beyond the walls of his building. Last year, using $200,000 of MAP money, the New Brunswick Museum and four other institutions collaborated on a yearlong touring exhibition on Acadian life. Its next stop is scheduled for Carraquet, N.B., in the heart of Acadia. Says Milligan: “A lot of smaller institutions will be left out in the cold without this program.” As Ottawa and the provinces concentrate increasingly on deficit reduction, arts groups are trying to protect their interests by citing their contributions to the economy. But Winnipeg author Carol Shields suggests that it is easy for politicians to target the cultural sphere since people are not talking publicly about the intangible rewards of art. “Politicians distrust that vocabulary,” she says, “and many in the arts have become cynical about it. People say, ‘How can you talk about culture when there are hospitals closing?’ Well, I wouldn’t relegate cultural matters to a second level of concern—it’s part of our well-being. We can have all those things on the table together.” With the latest budget, however, the cultural fare will be that much leaner. 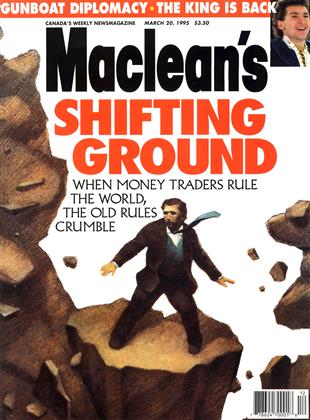