Dull grey clouds had hung over the Spanish fishing port of Vigo all day long, but the sky brightened just before sundown and the horizon blushed with a smudge of red—a good sign for those who believe in sailors' myths. In the fading light, about 50,000 people made their way up cobbled side streets to jam the central square for a political rally. Although the gathering was serious business, the mood was slightly festive, a celebration of local spirit Ban ners urging civic unity fluttered in the breeze. And regional folk music serenaded the crowd from loudspeakers-not the sexy flamenco guitar of southern Spain, but the unmistakable drone of bagpipes, so familiar to maritime ears.

Last week’s demonstration had been organized to protest Canada’s seizure of the Estai, the pride of Vigo’s long-distance fishing fleet and, to local thinking, the innocent victim of an illegal act. As town meetings go, this one was a roaring success. The feisty speeches and the crowd’s response—emotional, vocal and always polite—delivered a message as clear as white Spanish wine: Canada was behaving like a pirate on the high seas. Strike down the Maple Leaf; run up the skull and crossbones.

Vigo is the fishing capital of Galicia, a onetime kingdom and now fiercely autonomous region on Spain’s northwest coast. It was settled by a Celtic tribe six centuries before Christ and has always sent its men down to the sea in boats. Fishing is to Galicia what fishing is to Newfoundland: a pillar of the economy, the fabric of its history, inseparable from its soul. Indeed, the two peoples at the heart of last week’s international dispute over turbot have far more in common than just the bagpipes of their mutual Celtic heritage, even if they do not seem to be able to make common cause over fish. Both fear that fishing is a dying way of life. Both are partly to blame for selfishly over-fishing the resource that sustains them. And both believe that they are the true victims—of rapacious foreign fleets, of remote bureaucrats who limit their fishing, and of their own politicians, to whom they are just a minor irritant that can usually be ignored.

In fact the one thing that both sides agreed on last week was that the abbreviated voyage of the Estai had rocketed the fishing crisis from a sleepy political issue to the top of the agenda. “Not much, not much at all,” answered José Manuel Muñiz, president of the Association of Seafaring Fishermen, when asked at the rally about the Madrid government’s normal level of backing for the fishery. Ironically, he said, “Canada’s actions have given us political support that we’ve never had. For the first

time, the politicians of Spain and Europe are realizing the importance of the Galician fleet.”

That was hardly Ottawa’s intention when it decided to push the envelope of international law by seizing the Estai in international waters. The brazenness of the act may have caught the European Union (EU) off guard. But Canadian officials were also slightly taken aback at the way the normally fractious, bickering Union presented a common front in return.

Admittedly, there was little to suggest that they would do so. Europe’s fishing nations constantly battle over access to fish stocks, not just

around conference tables but at sea as well, sometimes resorting to the primitive argument of rifles or axes. At last fall’s Northwest Atlantic Fisheries Organization (NAFO) meetings, which ultimately established the 27,000-ton ceiling on turbot catches, Canadian negotiators skilfully exploited those differences. For one thing, according to fisheries officials from several nations, northern European countries led by the Germans, who have little national stake in fishing, leaned heavily on the Spanish and Portuguese to reduce their quota demands. As one Irish fishing official explained it: “Spain went through a pretty brutal period at the hands of its European partners. Countries like Ireland, Britain and Germany took an unprecedentedly tough line against the southern fishing states.”

But when it came time to divide the catch,

Canadian officials may have erred in pushing for

such lopsided weighting in their favor. “Canada did some good organizing and pulled off a sort of coup d’état at NAFO,” said a sympathetic EU official. “But the final agreement was won on a knife-edge, a vote of 8 to 7 that carried no moral weight. We warned the Canadians that it was unsustainable, but [Fisheries Minister Brian] Tobin wouldn’t listen. He had rambunctious personal exchanges with other officials, and came across to a lot of people as simply aggressive.”

Having already divided the EU to its advantage once, Ottawa may have banked on the 15-nation organization not being able to respond with a unified, effective voice when it seized the Estai. Ottawa’s lobbying in the first days after the arrest aimed to break EU solidarity, trying to recruit natural allies such as Ireland and Britain, whose own fleets are constantly butting heads with the Spanish in European waters. But, in public at least, the Union held. There may be a lot of pri-

vate admiration for what Canada did, as one EU official admitted. “But it became a question of political principle that left the EU with no option,” said Frank Doyle, general secretary of the Irish Fishermen’s Organization. ‘To do otherwise would have been to disown Spain and the whole idea of political union.”

In the politics of fish, principle often depends on circumstance. “As always when fighting over fish, people get very, very nationalistic,” said Ricardo Aguilar, biodiversity co-ordinator for Greenpeace in Madrid. Just last July, Spaniards lined the wharfs in the northern town of Burela to cheer Spanish fishermen towing in their own war trophy from the Bay of Biscay: the French trawler La Gabrielle, which the Spanish claimed was fishing with illegal drift nets. (In that case, the Spanish navy intervened and returned the ship to its French owners.) Certainly no matter how hard Canada pressed its view that the seizure of the Estai was a conservation question, Spaniards saw it as a violation of international law, a politically motivated attack on Spanish rights. “We know those waters and we are not ¡2 doing the fish any harm,” insisted Capt. Marino

0 Paz Pineiro as the Vigo rally dispersed. “We

1 were working honestly, legally, so why is Cana! da lying to the world about what we are doing?”

It was impossible to tell if he was winking because Paz wore an eye patch for the rally, part of the pirate costume he had donned while waving a ripped Canadian flag. But at least some of his puzzlement was disingenuous. All sides agree that, in commercial fishing, no one tells the truth. “Everyone cheats,” acknowledged Gloria Sio, editor of the respected trade publication Industrias Pesqueras (The Fishing Industry) in Vigo. “But we are resented because we have the biggest fleet in Europe as well as the biggest domestic market, which eveiVbne wants access to. It is a conflict over economics, not behavior ƒ

But with no significant coastal fishing grounds of its own, Spain’s long-distance fishing fleet is vilified wherever it roams. Irish and British fishermen are furious that the Spanish have been granted access to the so-called Irish Box fishing grounds beginning next year under a new EU directive. And Norwegian fishermen were among the most vociferous opponents of joining the EU during that country’s referendum campaign last fall, which ultimately rejected membership. They cited the notoriety of the Spanish fleet in warning against turning control over Norwegian waters to EU jurisdiction.

‘Twenty years ago, the mentality was that the sea was full of fish, and the ocean was a big place,” said Sergio Iglesias Martínez, a scientist at the Spanish Oceanography Institute in Vigo. Iglesias grew up in Vigo, and remembers the tension that once existed between fishermen and the scientists trying to measure the size of fish stocks. “But that has changed,” he said in an interview in his office overlooking Vigo Bay, where crab boats kept chugging past his I vista. “They know that they need the advice we give them, and they % know that they must fish with care.” Iglesias spent five weeks in the > disputed waters off the Grand Banks earlier this year, taking turbot 1 samples, and expects to return in the fall to work alongside his 1 Canadian colleagues. “Those fish are so, so deep,” he says. “This is a very technically driven fleet, and the fishermen feel that it was their expertise that found the grounds so the fish belong to them. Yet they let us do our work on board the ships, and they do care about conservation.”

But the Estai confrontation simply underscores the fact that there are too many boats chasing too few fish. ‘The reality is that no government wants to risk unpopularity by confronting the fishermen, or farmers, or miners, whose work is so obviously hard,” said Greenpeace’s Aguilar. “So Spain tries to put a few boats here and a few boats there on the high seas. The North Atlantic turbot is the last hope for this fleet.” The result is an increasing number of fish wars, almost certain to continue until the world finds a peaceful, legal way to rebuild stocks. The tragedy is that no one demonstrating their frustration in St. John’s or Vigo last week seemed to recognize the resemblance in the enemy. □ 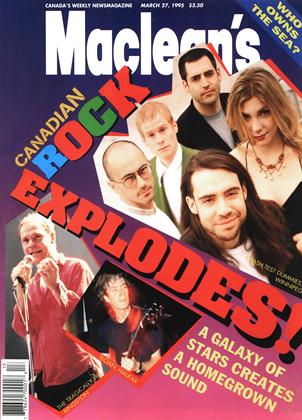