Health Science Centre, he asked her what had happened to him. Tears came to the mother’s eyes as she looked at her son’s bruised and swollen body. Marco, 29, has suffered from schizophrenia all of his adult life. On that day, he spoke to his mother through clenched teeth, his jaw wired because it had been shattered. A metal cage held his midsection in place to help his broken pelvis heal. An ankle and leg were cemented in a long cast, and a metal pin had been inserted in a broken wrist. He also wore the scar from a big gash down the length of his stomach, which doctors had opened to investigate injuries to his internal organs. The answer to Marco’s query was that his body had struck frozen ground

after falling more than 40 feet 11 days earlier. It was a miracle that he had lived at all. But his mother, Rosalba, says that the tragedy could have been avoided, and she wants to tell her story because she feels it will help bring about changes to the system for treating—and committing—psychiatric patients. “Thank God my son didn’t die,” she says. “But none of this should have happened. We need to change the law.”

When she came to Canada from Italy in 1958, Rosalba Vadacchino, now 54, dreamed of getting married and having a big family and a large, beautiful house—“all the things I didn’t have back home,” she says. She did find a husband, but by 1976 the marriage had turned sour, and she ended up raising her two sons on her own, working in the home decorating department of a Sears store to support them. Her youngest son, Marco, was an outgoing boy who scored high in sciences and math and planned to

study physics at the University of Toronto. “Marco’s smart,” says his mother. “He would’ve been a great scientist.”

But instead, Marco dropped out of school after Grade 11. He had become very withdrawn and mysterious. Once, he asked his mother if she heard Indians talking in their apartment; another time he started a fire with newspapers on the kitchen stove. He grew more irrational—and became violent. He smashed things and flung furniture around. He would say that someone had taken his brain and he was trying to find it. During the most violent fits, Rosalba would call the police and they would take her son to a hospital. At age 20, he was diagnosed with schizophrenia. “I wanted to die that day,” Rosalba recalls, her eyes welling with tears. “I thought schizophrenics were people who kill, and who have split personalities.”

But Rosalba learned more about the true nature of the illness. Canada’s estimated

270,000 schizophrenics, in fact, are rarely homicidal. They suffer from auditory hallucinations and paranoid delusions, not from a multiple personality disorder.

During his early 20s, Marco spent more than three years in various hospitals, including Toronto’s Clarke Institute of Psychiatry, where his treatment included electroshock therapy. He was unco-operative, and his long hospitalization ended when he was kicked out of one institution for discipline problems. His mother welcomed him home.

Even though Marco was relatively stable during the next four years, life was stressful. It was a constant battle to get Marco to take his medication, which subdued his symptoms. He could not work. And when his mother was out, he often invited over street people who robbed Rosalba repeatedly.

Rosalba joined a support group of people in Toronto’s Italian community who have schizophrenic family members. She has needed those friends more than ever during the past year. In 1993, the day after Christmas, it was bitterly cold but Marco wandered outside in his bare feet. He was committed for about a month to Humber Memorial Hospital in west-end Toronto. The grotesque blisters on his frostbitten feet became infected; doctors told Rosalba he might lose them, but he recovered intact. Last year, Marco was committed twice more to the same hospital—the second time for kicking his mother. He had attacked her, he said, because he had thought she was Adolf Hitler—he was obsessed with the Second World War and haunted by delusions involving the Nazi leader.

Things got worse in the new year. At 5:30 a.m. on Jan. 26, Marco suddenly burst into his mother’s room and began punching her in the head. “He said, Where did you bury my mother?’ ” recalled Rosalba, still sporting two black eyes. “ ‘Hitler told me you killed her and you want to kill me, too.’ ”

The police took Marco to a hospital, and the same day he was transferred to Humber Memorial under a Form 1—a 72-hour certificate of involuntary committal. Marco’s psychiatrist at Humber Memorial told Rosalba that it was clear her son could no longer live with her and promised to place him in a facility where he could receive long-term care.

But five days later, a distraught Rosalba returned home from errands to find Marco lying in his bed. He told her that he had entered their fifth-floor apartment through the balcony. The only way he could have done that was by climbing to it from a neigh-

bor’s balcony. Marco had asked hospital staff to allow him to go home, and another psychiatrist assessed him. The doctor judged that Marco was not showing signs of violent or suicidal tendencies. And while he advised Marco against leaving the hospital, he still allowed the disturbed young man to sign himself out that afternoon. “When I saw Marco at home, I almost had a fit myself,” says Rosalba.

She talked her son into going with her to the emergency ward at Humber Memorial so he could be readmitted. But after two hours of waiting, when the duty doctor finally got to them, Marco declared that his mother had forced him to go there against his will. Rosalba says that she explained to the physician that the dark bruises on her face were the result of an assault by her son that had led to his involuntary committal to the hospital just five days earlier. She added that Marco’s psychiatrist had left her with the impression that her son was to be kept in the hospital until long-term care could be arranged. She also said that Marco’s climb to their apartment that very day clearly indicated that he was a danger to himself. She pleaded with the doctor to hospitalize her son, saying that she was afraid of him in his current state.

But according to Rosalba, the doctor said that he could not keep Marco against his will. Her statement, if accurate, is at odds with the province’s Mental Health Act, which allows a doctor to commit a patient if, among other things, the individual “is causing another person to fear bodily harm from him or her,” and if the individual is suffering from a mental disorder that will likely result in serious bodily harm to the patient or to others. At this point, Marco had a record of violence dating back to 1984. His file at the hospital was 2 14years old. Days earlier, he had savagely beaten his mother. But the doctor declined to keep him.

The physician advised Rosalba to go home, change the lock on her apartment and shut her son out, she says. She left the emergency room crying and told the doctor: “See what you can do with him.” The last thing she heard was the doctor giving her son the address of a shelter for the homeless.

After a sleepless night, Rosalba received a phone call from her son the next morning. She told him that he could come home. When he did, he hugged his mother. “I’m 29 and I feel like a child inside,” he said, weeping. She gave him a glass of milk and his medication. He stayed in bed for most of the

next 36 hours. At around midnight on Feb. 2, Marco got up and began a conversation with his mother. Staring at her, he said, “I see the devil in your eyes.” He attacked her again. When she ran out of the apartment this time, he locked the door and jumped from the fifthfloor balcony.

Humber Memorial Hospital executive vicepresident Scott Dudgeon told Maclean’s that he could not discuss details of Marco’s case without the patient’s permission because of provincial laws restricting the release of confidential medical information. But Dudgeon said that after examining Marco’s hospital file and speaking with the two psychiatrists involved, he was satisfied that “the patient was well cared for and things were done as they ought to have been done.”

While Rosalba says it is too early to tell how much permanent damage Marco has suffered, the 60 families in her support group, many of them outraged, have launched a drive to collect 5,000 signatures on a petition, demanding changes to provincial laws. Their aim is to make it easier for families to force treatment on loved ones who are mentally ill and unco-operative. Rosalba says that relatives should have just as much say in such matters as physicians. “Now that this tragedy has happened, doctors ask me to sign consent forms for Marco’s operations,” she says. “But when he’s mentally ill, I have no say at all.”

Other groups across the country have long campaigned for changes to legislation governing the committal of schizophrenics and the mentally ill. Last week, the Ontario Friends of Schizophrenics, which has 2,000 member families, launched a campaign to lobby candidates and party leaders in the provincial election to be held this year. Among the changes they are seeking: including mental suffering and the need for care as grounds for involuntary hospitalization, in addition to the current rule that a patient must be dangerous.

But defenders of the existing law say that one effect of such changes is to grant the state greater power to remove a person’s liberty—an unwelcome prospect given the primitive treatment many psychiatric patients receive in institutions. “If there were a magic pill for people with mental illness where the benefits were clear and the sideeffects minimal, informed consent wouldn’t be an issue,” says David Giuffrida, legal counsel to the Psychiatric Patient Advocate Office, a quasi-independent provincial agency. “But there is no magic cure right now, and people in hospitals are often strapped into beds and forced to take powerful mind-altering drugs that cause their bodies to shake.”

While the debate over coercion and care for psychiatric patients rages, one fact is painfully clear to Rosalba Vadacchino: her son would not have been in a position to plunge from the fifth floor of her apartment building in the early hours of Feb. 3 if he had been kept in the hospital. □ 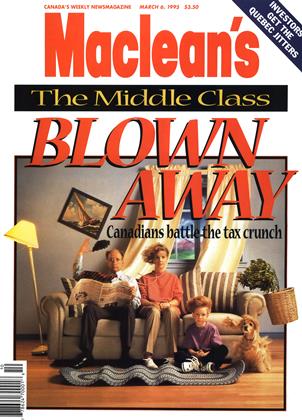