Even their names seem calculated to intimidate: Tremors, Satan Bug, Ripper. They can move stealthily and strike without warning. Yet they have no real life of their own, and go virtually unnoticed until they find a suitable host. Computer

viruses—tiny bits of programming code capable of destroying vast amounts of stored data—bear an uncannily close relationship to their biological namesake. And like natural viruses, computer viruses are constantly changing, making them more and more difficult to detect.

Department of finance officials in Ottawa discovered just how difficult last February. Prior to the release of the federal budget, government employees checked for viruses on computer disks containing closely guarded budget information. But when the disks were sent to a local software duplicating company, mediaLand Inc., a new, potentially lethal type of virus was found. The discovery came around 6 a.m. on budget day—less than an hour before the disks were due for delivery to many of Canada’s largest banks and accounting firms. “A virus can destroy a business or a research project,” says Jamie Melamed, president of mediaLand. “It’s not a pretty picture.”

From a few cases in 1986, computer viruses have swelled to an

epidemic. It is estimated that two or three new varieties are written each day. Most experts believe that a virus is created by an immature, disenchanted computer whiz, frequently called a “cracker” (malicious hacker). The effects may be benign: one variation of the famous Stoned virus merely dis' plays a message calling for the legalization of marijuana. Other viruses, however, can scramble files or create a frenzy of duplication that may cause a computer’s microchips to fail.

The rapid increase in computer networks, with their millions of users exchanging vast amounts of information, has only made the problem worse. Crackers have also succeeded in tainting software sold by brand-name manufacturers. A clutch of companies offer antiviral programs, capable of detecting viruses before they have a chance to spread. Such programs, with names like ThunderBYTE, VirusRx and F-Protect, find the majority of viruses.

But Douglas Forbes, a systems engineer with anti-virus company Symantec Inc. in Toronto, says that virus detection is likely to remain a serious problem because of the ingenuity of crackers. One new type of virus, known as polymorphic, evades discovery by changing slightly each time it replicates itself. The best defence, Forbes says, is to ensure that all new material is scanned by a current anti-virus program. “It’s like insurance,” he says. “You don’t usually need it, but once something happens, you’re really glad to have it.” 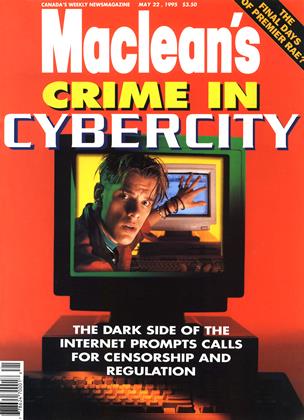