The incident had the potential to trigger yet another rift between Englishand French-Canadians. Since last October, when she moved with her two children to Owen Sound, 200 km northwest of Toronto, Johanne Harvey, 32, claims that someone has been trying to drive her out of the city simply because she is French-speaking. Her house has been bombarded with eggs, and someone wrote "Frogs go home" in excrement on her front window. But when her cat, Napoleon, was beaten to death in late April, Harvey turned to the media with her accusations and threat ened to move to Montreal. And last week when her story appeared in Quebec newspa pers, it appeared that it would spark outrage in Quebec reminiscent of the reaction to the trampling of a Quebec flag in Ontario in 1990. But this time, the people of Owen Sound denied ammunition to Quebec sepa ratists: they rushed to Harvey's defence and Mayor Stew Taylor even formally apolo gized. As he did, Harvey hugged him and broke down in tears. "I'm staying," said Har vey. "I'll do anything for this city."

Harvey’s problems began on Halloween in 1994, when someone pelted her house with eggs. She dismissed the incident as a prank, but whoever hurled the eggs returned repeatedly over the next she months. “Sometimes, there were so many eggs exploding against the house it sounded like popcorn,” said Harvey. “It had to be more than one person.” After several attacks, Harvey thought the vandals’ target might have been a Que bec flag she had hung in the bedroom window of her eight-year-old son, Samuell. She removed it, but in December someone smeared the “Frogs go home” threat across her window. “I was outside in my housecoat in tears wiping it off,” she recalled. “It was frightening.” And in April, Napoleon was found near death on her front porch, and had

to be put to sleep later the same day. When the police told her that there was nothing they could do, she told her story to a local paper on May 11. Four days later, her story became national news when it was picked up by media in Quebec and Toronto.

Harvey, who is divorced, was bom in Montreal but moved to the Windsor area as a young child. She relocated to a small town near Owen Sound in 1993 to be with her ailing mother, and last October deéided to move into the city. She is now driving a school bus and attending English classes at a local college. And as a warm spring evening settled over her home, which overlooks the industrial city of 20,000 people on the shore of Georgian Bay, Harvey showed Maclean’s the remnants of numerous egg stains on her windows. ‘They are just jealous,” said her daughter,

Valérie, 9, “because we are French.” And with that, her mother went inside and soon reappeared in her son’s window, where she re-hung the Fleur-de-lys. “We’re proud to be French,” said Harvey. “We have to hold our heads up.”

Just a few hours after the mayor’s apology, Harvey began unpacking boxes that she had prepared for shipment to Montreal. In fact, Harvey was so grateful to the people of Owen Sound that she now wants to give something back to the city, and suggested she would like to take care of a small park located beside her home. “If my children are safe,” said Harvey, “I’d love to stay right here.” Many citizens of Owen Sound, who seemed genuinely saddened by the attacks on Harvey, said they were glad she decided to stay. A number of people shopping downtown said the attacks were isolated incidents. Others pointed out that the town’s former mayor, Ovid Jackson, who is now the Liberal MP for the area, is black. A vote for him, they said, was a vote for tolerance. Harvey’s neighbors were also perplexed. As they chatted over their fence, Janet Govereau and Pauline Mcllmoyle said their street is generally very quiet. Said Mcllmoyle: “I just hope the police catch whoever it is.”

Despite such high-profile attacks on a French-Canadian family, the controversy failed to catch fire in Quebec. It has not always been that way. In May, 1990, when nationalist emotions were at a fever pitch in the province following the failure of the Meech Lake accord, a group of English protesters in Brockville, Ont., trampled the Quebec flag. Repeated broadcasts of the incident provoked outrage in Quebec, and support for sovereignty soared to 60 per cent. In an interview last December, Quebec Premier Jacques Parizeau said he hoped a similar incident would take place in Ontario. Said Parizeau: “Give me half a dozen Ontarians trampling the Quebec flag before the vote on sovereignty, and it’s in the bag.”

This time, however, English media seemed more interested in the story than were their French counterparts. Richard Duret, an assignment editor for RadioCanada in Montreal, said that the CBC’s French-language radio service decided against extensive coverage of the attack on Harvey because it appeared to be an isolated incident “In Brockville, it was a group that was targeted and it was a symbol that was walked on,” said Duret. “But in Owen Sound, we don’t know if it is a group or an individual that was being targeted.”

There also seemed to be an awareness in Quebec’s French-language media that some parts of rural Ontario may be home to bigots whose views do not reflect those of the province’s entire population. Benoit Aubin, news director of Montreal’s TVA network, dismissed the Owen Sound incident as the work of “yahoos,” and gave it only a brief mention in his newscasts. Added Aubin: “We’re not going to hold the presses because there are some racists in the Bible Belt of Ontario.” The actions of Mayor Taylor and his city council also helped to contain the issue. In contrast, five years ago politicians in a number of Ontario cities, led by Mayor Joe Fratesi of Sault Ste. Marie, generated publicity when they attempted to have their cities declared English-only jurisdictions. But Taylor said Owen Sound, which has about 105 citizens of French origin, refused to go along because the council believed such an endorsement would damage national unity. At a council meeting last week, Taylor said it was important to tell the rest of Canada that Owen Sound still stands for tolerance. “There are individuals who would like to broaden this issue,” said the mayor. “But this incident is not indicative of Owen Sound.”

Taylor delivered the official apology to Harvey by reading a resolution passed by the council. In addition, the council also declared Owen Sound’s support for her family. “Johanne Harvey has been subject to isolated acts of violence. But these actions do not represent in any way the feelings or opinions of the Owen Sound community.” And that, at least, was a great relief to the Harvey family. 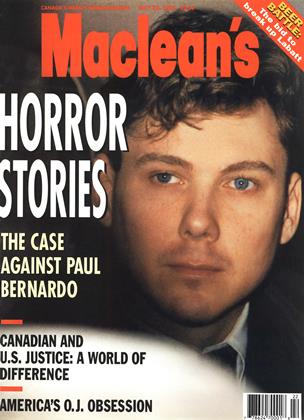