GETTING TO THE ROOT OF THE MATTER

Adrienne Clarkson seriously considered donating her toenails to medical science. Last month, the CBC-TV host, along with about 190,000 other University of Toronto graduates, received an unusual request to send “a clipping from each of your toenails” and “six strands of hair, including the roots” to researchers at their alma mater. “I was intrigued,” says Clarkson, who started to fill out the accompanying question-1 naire, but then balked at including her name. “It bothered me g that we would all be identified.” By measuring the levels of such | substances as selenium, iron and mercury in hair and nails, re-1 searchers hope to trace possible links between diet and such g diseases as cancer and diabetes. Dr. Tom Rohan, co-ordinator of1“ the $350,000 study, which is funded by the National Cancer Institute of Canada, aims to recruit a total of 100,000 men and women graduates from the University of British Columbia in Vancouver, the University of Alberta in Edmonton and the University of Western Ontario in London, Ont., as well as from the U of T. Despite Clarkson’s reaction, Rohan, an associate professor of preventive medicine at U of T, says he is encouraged by the early response. Still, researchers may have trouble collecting toenails from other famous alumni. Former Ontario premier David Peterson said that his questionnaire is “in a pile of mail somewhere,” while film director Atom Egoyan was too busy to respond. “It’s absolutely absurd and relatively naïve,” says Egoyan, “to think people are going to give up specimens of their body parts.” Author Farley S Mowat is still waiting for the forms to arrive in his mailbox.

THE GOOD, BAD AND SEXY

For Ottawa’s movers and shakers,

The Hill Times’ annual survey of Members of Parliament is a much anticipated event. The weekly newspaper, which covers the events, legislation and personalities on Parliament Hill, ranks the MPs in categories ranging from sexiest and best-dressed to most fun to work with. After polling the elected officials’ full-time staff in Ottawa, Calgary Reform party MP Jan Brown won the hat trick: sexiest and best-dressed female and most generous. Slick newlywed Patrick Gagnon, a Quebec Liberal, topped the sexiest male list for the second straight year. Deputy Prime Minister Sheila Copps may be wondering just how fair the polling of 134 Hill offices really was—she was named worst-dressed.

And Newfoundland Liberal George Baker was shocked to hear that he had been named as the best teller of jokes. “That’s a weird one,” says Baker. “I haven’t told a joke in years.” Clearly, his reputation as an Opposition stirrer-of-the pot has not faded despite good behavior since being on the government

side. Baker says his humor is less appropriate in these serious times, but is glad that Hill staff recall his glory days in the House. Said the humble Baker: “I’m honored to be still remembered.” No kidding.

A HIGH-TECH PLEA FOR HELP

To the people who use it, the Internet is both a handy way to communicate and it can also serve as a convenient research tool. But for Girvies Davis, 37, it may also mean the difference between life and death. An inmate at Illinois’ Menard Correctional Center, Girvies is scheduled to be executed by lethal injection on May 17 for the vicious murder of an 89-year-old pensioner during an attempted robbery in 1978. Girvies, however, maintains that he is innocent, and to publicize his case, he and his lawyers have set up a “Clemency Homepage” on the Internet’s World Wide Web. The site (at http://www.mcs.net/-bkmurph/girvies.htm) features a personal plea from the condemned man, a petition, several newspaper articles about the case and samples of Davis’s handwriting to buttress his claim that police forged his confession. In addition, a click of a mouse button allows visitors to fire off an e-mail message to Illinois Gov. James Edgar in support of Davis’s plea for clemency. According to David Schwartz, one of Davis’s lawyers, more than 1,000 Internet users, some from as far away as Britain, visited the site in the first six hours after it opened last week. “The response has exceeded our expectations,” Schwartz said. Davis, he added, “is trying to keep his spirits up, considering that he is scheduled to die in a few weeks. This project at least offers him some hope.

FROM REVILED ART TO REVERED ICONS

When the Group of Seven mounted their first public exhibit at the Toronto Art Gallery on May 7, 1920, their vibrant paintings of the Canadian landscape shocked the art world. “Are these new Canadian painters crazy?” railed one headline in the Canadian Courier. Visitors were outraged. “Disgraceful,” one elderly woman was quoted as saying. “The right place for this stuff is the ashcan,” her

companion agreed. To the refined tastes of that era, “art” meant gentle pastoral scenes in the European style. The forceful, stylized paintings of the hinterlands by J. E. H. MacDonald, Lawren Harris and other members of the Group by comparison appeared crude and primi2 tive, with their depiction of 8 trees, snow, rocks and even I shacks, in wild mauves, vermilion and deep orange. Few expected the movement to last. “Is this radical eruption the Canadian art of the future?” asked the Courier reviewer. “Nobody knows.” Now, the McMichael Gallery in Kleinburg, Ont., just north of Toronto, plans to celebrate the 75th anniversary of the Group of Seven with Diamonds in the Rough. The twopart exhibit, which opens on July 29, will include more than 700 paintings, drawings, prints, commercial work, books and photographs. “They have become the most famous artists in Canadian history,” says gallery curator Megan Bice, “symbolizing for many the concept of a distinctly Canadian identity.”

INEQUALITY ON THE INCREASE

44^T^he rich get richer and the poor get poorer” may be an old adage, but a re.Â. cent series of studies reveals that it may be more apt than ever. The research indicates that the United States has become the most economically stratified of all industrial nations in the world. According to figures pulled together from the U.S. Federal Reserve, the wealthiest one per cent of American households—those with net worth of least $3.2 million each—owns nearly 40 per cent of the nation’s wealth. But on the bottom end, the lowest-earning 20 per cent of Americans earn only 5.7 per cent of all after-tax wages. At the same time, Canada now ranks third, after the United States and Italy, in terms of the growing gap between high-eamers and those individuals who barely scrape by on their paycheques. Those latest fig-

ures tend to bear out the findings in a Maclean ’s/ Decima poll late last year in which 60 per cent of those questioned said they perceived that the gap between the rich and the middle class has grown steadily wider. Still, Lars Osberg, an economics professor at Dalhousie University in Halifax, says that total family income inequality has remained relatively stable in Canada throughout the 1980s, compared with the United States. He attributes that comparative stability to federal transfer payments to the provinces, including unemployment insurance, and accessible postsecondary education. But, with those programs slated for serious cutbacks in the last federal budget, the wealth gap seems destined to grow even wider. 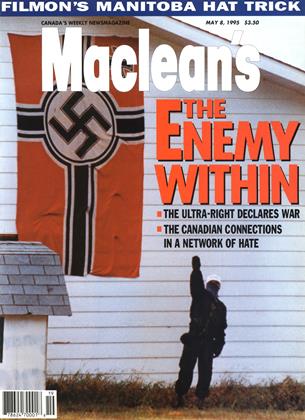