The bright comer office of Ontario’s premier in the Queen’s Park legislative building is decorated with several mementoes of the New Democratic Party’s interventionist economic philosophy. On Bob Rae’s credenza are two bright white plastic models of Canadair Regional Jets, 50-seater aircraft with a 1,800-mile range and a $23-million price tag that are painted and fitted in Toronto by the de Havilland division of Bombardier Inc. Rae is proud of these two mementoes from de Havilland, in which Ontario taxpayers took a 49-per-cent stake in 1992. They represent just one of several companies that were saved from financial collapse by the direct investment of his government. About a year after he was elected as premier in September, 1990, Rae also bailed out Spmce Falls Power and Paper Co. in Kapuskasing, Sault Ste. Marie-based Algoma Steel Corp. Ltd. and, in the past year, Ontario Bus Industries Inc. in Mississauga. The likely next occupant of the premier’s office, however, will probably not cherish these cor-

porate keepsakes—or add new ones to the collection. Both the Liberal and Progressive Conservative parties—which have consistently far outscored the NDP in pre-election popularity polls—have firmly pledged to steer clear of such entanglements, despite their apparent recent success. And according to Toronto’s York University economics professor Fred Lazar, that commitment is positive news. “Those rescues were bom out of panic, not policy. It is inappropriate to throw in money without an idea of how to turn around a dying company,” he said. “In Rae’s case, he’s been lucky. But I am willing to bet that run of luck will not continue.”

Even Liberal economic development and trade critic Monte Kwinter, a former provincial minister of industry, trade and technology, agrees that Rae’s use of public funds— through grants, loan guarantees or interest-free loans—has turned out well in three out of the four rescue operations. Only the province’s $81-million investment in Ontario Bus Industries Inc. was, says Kwinter, a

“total disaster." But, he points out, the other interventions succeeded in large part because of a turnaround in the provincial economy accompanied by an upturn in the commodity—and stock—markets. Dramatic hikes in I newsprint and steel prices have done much to shore up the finances of I both Spmce Falls and Algoma Steel. Newsprint prices have moved from $600 to $925 a ton in 18 months, and renewed demand for steel has sent j its price from $120 to $185 a ton £ since the depths of the recession in 1992. The jury is still out on de Havilland, where Montreal-based Bombardier is scouting for signs of interest in a new, bigger version of its Dash 8 aircraft before committing to expanding the Toronto company, in which it holds a 51-per-cent stake.

When Rae decided to tackle Algoma’s problems in 1992, the company was grounded by high debt, an aging, inefficient plant and depressed demand for its steel pipe and

train rails. It was on the verge of failure, a collapse that would have pushed Sault Ste. Marie’s unemployment rate to 30 per cent. The province contributed $110 million in bank-loan guarantees and about $17 million in early retirement benefits to restructure the steelmaker’s workforce.

In exchange for wage and benefit concessions of about $3 on the average hourly wage of $19.70, which helped make the company more competitive, the restructuring resulted in a 60-per-cent stake in the company going to Algoma’s 5,300 workers—down from more than 6,000 employees prior to the restructuring. The remaining 40 per cent was initially owned by Algoma’s bankers, which have since sold their shares on the open market. The efficiency of the new Algoma and the rise in steel prices meant that workers and bankers alike have been rewarded for taking a risk in the company’s future: common share prices have jumped from pennies a share to $9.38 last week, and the £ company turned a $127-million profit in 1994 g on sales of $1.1 billion, s Now, a refinancing that will see mortgage

duce the thin, high-quality steel sheets needed to make auto parts, a potentially profitable new market for Algoma. The steelmaker never had to dip into the government’s loan guarantees and Lazar says the provincial taxpayers’ $17-million contribution is more than paid back by the welfare costs that were avoided and the economic spinoffs that come from keeping a major company alive and its thousands of employees working.

Yet even in Sault Ste. Marie, the NDP’s bailout failed to win the party new friends. Town Mayor Joe Fratesi faced economic disaster when Algoma was on the brink of failure—he estimates that the city of 82,000 would have witnessed 30-per-cent unemployment and jarring upheaval if the steel mill had closed. Said Fratesi: “I acknowledge the premier’s role, it’s a positive check on his scorecard. But there are other policies that we disagree on.” And in the provincial election campaign, Fratesi openly backed the Liberals. He added: “If you go down to the factory gate, you’ll find some of the employees saying Bob Rae is taking just a bit to much credit for Algoma, and not enough credit is being given to the steelworkers’ concessions.”

A similar economic success story has played out in Kapuskasing. There, Rae put together a plan that saw Ontario Hydro advance a $34-million loan to Spruce Falls, along with 10 years of free power. As well, Ontario Hydro agreed to purchase Spruce Fall’s generating plant for $142 million. That money was re-deployed by employees to buy Spruce Falls from its former owners, Kimberly-Clark Corp. of Dallas and The New York Times Co. of New York City. The arrangement with Hydro left the government on the hook if the power plant failed an environmental assessment. But the environmental approval was eventually given and, currently, 52 per cent of Spruce Falls is owned by its 1,000 workers. Members of the community own about seven per cent of the company and the

With newsprint demand soaring in the past 18 months, Spruce Falls generated a $16.7-million profit last year on revenues of $142.1 million, and the price of employees’ shares in the company, which trade infrequently on Canada’s over-the-counter stock market, have risen to more than five dollars a share from just a dollar when the rescue went through. Spruce Falls is now looking to the private sector for a $400-million capital investment in new machinery. And last week, it announced that it had snapped up an 18-per-cent stake in Timmins, Ont.-based forestry firm Malette Inc., a move that came as a prelude to Tembec’s $360-million takeover bid for Malette.

For their part, both Liberal and Progressive Conservative leaders pledged that they would preserve the NDP legislation that allowed Algoma and Spruce Falls workers to invest in their employer. But Kwinter cautioned: “We want to provide opportunities for employees, but to go out and encourage people to invest their life savings with no guarantees for the future is irresponsible. And that is what some of these deals meant to the workers.”

Closer to Queen’s Park, de Havilland of Toronto was near collapse—and the workforce of 2,750 was on the line—when Boeing Co. of Seattle opted in March, 1992, to sell the money-losing aircraft manufacturer, which also had a history of labor problems. The NDP government stepped in with a direct investment of $49 million and it is also on the hook for 50 per cent of $370 million in federal and provincial government assistance being provided over a five-year period that ends early in 1997. As a result, Ontario taxpayers now own 49 per cent of de Havilland, while Montreal-based Bombardier Inc. holds the remaining 51 per cent, as well as an option to buy the province’s stake for $49 million.

close information on the profits, or losses, from de Havilland’s performance, Bombardier’s aerospace division, which includes the de Havilland and Canadair units, earned a $141-million profit last year on revenues of $3 billion. Bombardier has undertaken to build its Global Express line of long-range corporate jets at de Havilland and it is also in the running to become the production site for Bombardier’s new, 70seat version of the Dash 8-400 propellerdriven aircraft. The Liberals’ Kwinter says it is too early to assess the government’s de Havilland bailout, but Rae has maintained that the aircraft manufacturer is a winner, with positive cash flow, and that the government’s investment was imperative to salvage the sort of high-technology jobs that Ontario must foster to maintain its standard of living over the long term.

But, clearly, the case of Ontario Bus Industries is an ongoing problem. The company once employed 1,200 workers at plants in Mississauga and upstate New York, building about 900 buses a year. OBI, however, was crippled by a bout of overly rapid expansion and a predatory pricing war with competitors. It now has only 165 employees in Ontario—and bus production has slowed to a trickle. The province now owns OBI outright, after forgiving $66 million in loans and adding in $15 million in new capital, and is selling the company to Western Star Truck Holdings Ltd. of Kelowna, B.C., for $35 million in a deal slated to close later this month. But Ontario taxpayers could still end up owning up to 25 per cent of the new OBI, which Western Star management claims it can turn around by improving internal controls and building a more efficient factory.

Ontario taxpayers will assuredly experience less direct investment in the provincial economy under a Progressive Conservative or Liberal government. The Tories’ economic blueprint declares that “we will cut business subsidies and reduce government grants for total savings of $200 million.” Peter Varley, press secretary for Conservative party leader Mike Harris, insists: ‘We do not believe that the government can go around picking winners and losers.” The Liberal’s Kwinter noted that a Liberal government would not make direct investments, but it would consider loan guarantees to troubled businesses on a case-by-case basis, particularly if a oneindustry town were threatened. But he added: “If the market says a company doesn’t deserve to be saved, then it should not be saved.” The very best a struggling company can hope for, says Kwinter, is short-term loan guarantees that would back up funds coming from the private sector. Clearly, no matter which opposition party Ontario voters elect, some of Bob Rae’s favorite industrial souvenirs are heading into storage. 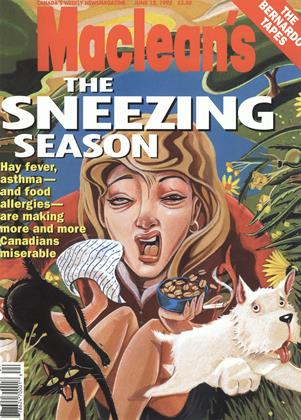