In Ottawa last month, there was a big controversy about a windmill. The Dutch-Canadian community wanted to give one to the people of Ottawa, in gratitude for Canada’s help in liberating Holland in the Second World War. But the National Capital Commission (NCC), which controls many of the public spaces in the city, rejected the idea, fearing it would be too big, fearing vandalism, fearing arson, fearing all the things that bureaucrats fear, many of which would mean nothing to you.

No harm done, perhaps. When you think of all the things we need in Canadian society, a windmill does not spring immediately to mind. As might have been predicted, however, the people of Ottawa loved the idea. About 2,000 of them phoned The Ottawa Citizen Touchline and voted 9 to 1 in favor of the windmill. The NCC appears to have changed its mind, and Ottawa will probably have a windmill after all. Perhaps homeless people can sleep in it.

We are strange folks. We believe in windmills and Forrest Gump. We believe in paperback spiritualism and The Bridges of Madison County. Yet we also, on the evidence of the Ontario election results, believe in punishing people on welfare.

We get misty-eyed over Field of Dreams and the rickety ball parks of the minor leagues at the same time as we curse the millionaires who play the same game at the major-league level.

It is on the personal, not the policy, level that the last straw breaks for us. A good argument can be made that what did Brian Mulroney in was not free trade or the GST but the Gucci shoes and the imperial style.

Which brings us to Jean Chrétien, a man who seems to ride above all this cynicism and distrust on his own cloud. It cannot be because of his policies, for they are about the same as the ones Mulroney and his gang put in. So it must be a question of personal style. Chrétien would not have Gucci shoes; Chrétien would not have a big airplane, a big limousine, a fancy hotel suite. Or so it is perceived. He is honest, ordinary. He is like us.

Is that it? Is that why Chrétien is immune from the cynicism? If so, good. More people should be like us, and it wouldn’t hurt if more politicians, bank presidents and baseball players tried. The question is whether they all have to take vows of poverty in order to do so. May a cabinet minister fly firstclass on government business? May a bank president live in a big house? May a baseball player earn more than a teacher?

For that matter, may a teacher take the summer off? May a doctor drive a big car? Can a police officer be believed? The cynicism is stacked just as heavily against them as against the famous and powerful.

Forrest Gump or Jean Chrétien? And how do we get away from it? How do we get to the point at which we can admire people as much as we admire windmills.

First, identify the cause. The news media are easy suspects. George Bain, who analyzes media for this magazine, has eloquently attacked the negativism of political reporters in this country. In his book Gotcha!: How the Media Distort the News, published last year by Key Porter, Bain lamented the tendency of reporters “to look upon politicians as the foe, to consider mutually tolerant relationships with politicians as incapable of being maintained except at the expense of journalistic independence and to see the natural condition between the two as a war in which the media must be on endless search-anddestroy missions.” Still, the media rarely lead public opinion, by much, and if public opinion reacted against what it was being fed by the media, the media would change the diet rapidly.

The negativism of the media finds a receptive audience. And that feeds more negativism, notably the U.S.-style sensationalism of 60 Minutes and the tabloid TV shows. As long as audiences sit still for it, it will keep coming. And as long as it keeps coming, office seekers will feed off it, making the public, in turn, more cynical. A search for scapegoats becomes inevitable. This year welfare recipients, next year, what?

The cycle has to be broken if we are to avoid ripping ourselves apart. Our society would function better and be an infinitely more pleasant place if cynicism were not the prevailing ethic. How about, for a start, accepting the idea that people at the bottom of the economic scale are not there because they enjoy it. After that, we can move on to the idea that the people at the top might actually be decent human beings who didn’t necessarily cheat to get there.

We then arrive at a state of mind in which all profit is not automatically extortion and all welfare is not automatically fraud. We can then add to it some old dusted-off ideas, such as the one about a man being innocent until proven guilty. Then, we can watch out for those who transgress, reminding ourselves all the while what that old phrase “the benefit of the doubt” means.

If we can believe in windmills, we can do this.

If we don’t, watch for the disappearance of Chrétien’s cloud. When that happens, it will not be because the dollar falls, or the inflation rate rises; it will not be because people are out of work or out of clean water. It will be because Chrétien buys a new suit, takes a holiday in the wrong place or is discovered to have a piano that is too good.

The fall of one more politician is not important in itself. The country can survive. What it can’t survive is losing any more innocent victims to the negativism of the age. That is as true in business, sports, medicine, education and the arts as it is in politics. Cynicism will destroy this country before separatism ever does. 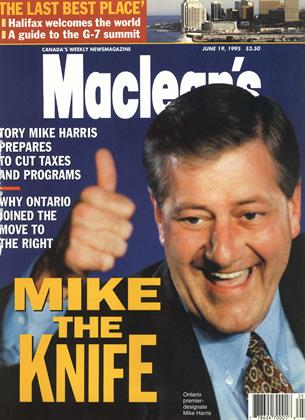