In most areas of life, an apt description of the art of being graceful would be that it consists of making the hard look easy. In politics, the reverse is also true: a graceful politician can take an easy or inconsequential issue and make it look complex and crucial. That allows a government to act only if it chooses, and to justify its delay when it does not. All governments do this: only the graceful ones get away with it Which brings to mind the Liberals. In many policy areas, they do nothing, but do it with great grace. Try to think, for example, of a substantive initiative that the Liberals have achieved in such fields as the environment or health care. Often, Liberal policies are defined by what is not done rather than by what is. For one,

Prime Minister Jean Chrétien has successfully manoeuvred around a political minefield on the Quebec issue by doing nothing either to buy favor or to punish a province that elected a majority of sovereigntists provincially and federally. And in foreign policy and trade, the Liberals’ do-nothing stand on human rights has created their concept of a Charter of Rights: all money is created equal, and no money will be rejected or discriminated against, regardless of the country of origin and its abuses.

But lately, the liberals’ thin list of achievements has been eroded on several fronts, while its agenda for the rest of its mandate appears even more bare. Human Resources Minister Lloyd Axworthy’s much-vaunted plans to overhaul social programs now belong more to yesterday than tomorrow. And remember that promise to replace the Goods and Services Tax? The Liberals wish you wouldn’t Then, there is the early move to tear up the deal made by the Progressive Conservatives to privatize Toronto’s Pearson International Airport. The breaking of the contract has turned out to be an embarrassment to all sides. Last week, the Ontario Court of Appeal upheld a lower court ruling that Ottawa can be held liable for damages arising from cancelling the deal, clearing the way for a fall trial to assess damages. Another cause for postelection boasting, the scrapping of the Tories’ $4.8-billion purchase of new helicopters, will rise again to haunt the

Liberals: the purchase of new helicopters—though more modest in cost than originally planned—is inevitable and essential. Now, think of patronage: the Liberals certainly do, often enough. Despite that, they have largely escaped criticism. But public perception changes quickly—and may soon, with two events. One is the pork-barreling of Public Works Minister David Dingwall, who has taken $26 million intended to fix a dangerous stretch of the Trans-Canada Highway and detoured the money onto one of his own riding’s secondary roads, the Fleur-delis Trail to historic Louisbourg. The other is the plan to appoint former Montreal backbencher David Berger as ambassador to Israel. It would be an extraordinarily generous reward for an MP whose political career is most remembered for the manner in which he left it—resigning last December to create a safe Montreal seat for new Labor Minister Lucienne Robillard.

That leaves justice and the finance department’s deficitcutting efforts as the two areas of genuine accomplishment. Both ministers have problems. Justice Minister Allan Rock’s gun-control legislation, the centrepiece of his efforts, has divided the party on urban-rural lines and given the Reform party an issue that will resonate into the next election. And while Finance Minister Paul Martin’s next budget is more than eight months away, Martin is telling friends that he is deeply worried that cabinet colleagues will not agree to the deep cuts needed to reduce the deficit next year from $32.7 billion to $24.3 billion as promised. Achieving that will mean reducing the size of such sacred programs as old age pensions. As a result, Martin may privately ask Chrétien to guarantee his support for specific cuts before they are proposed to cabinet Even without much heavy lifting to date, the liberals, with the notable exception of Chrétien himself, look and act tired. The turnover in short-staffed ministerial offices has been high and, 19 months into office, many MPs routinely talk about being “in mid-mandate.” Is the honeymoon over? No, but the liberals are starting to learn firsthand the real definition and importance of grace—which is whether they can maintain it when under fire. 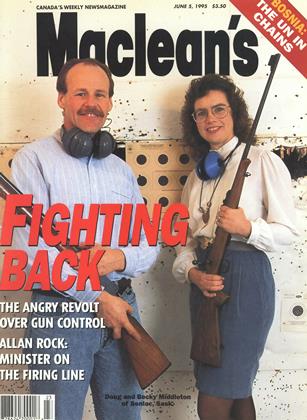