‘Paul made me do if

Bernardo’s ex-wife portrays herself as a victim

The revelations—startling, sensational and occasionally sickening—flowed from the slender, blond witness with an icy detachment. For five days last week in a crowded downtown Toronto courtroom, as she testified at the first-degree murder trial of her ex-husband Paul Bernardo, 25-year-old Karla Homolka rarely raised her voice or displayed any emotion, even while describing beatings, rapes and murders. In testimony that often appeared well-rehearsed, Homolka portrayed herself, at various stages of her turbulent five-year relationship with Bernardo, as a vivacious teenager, a young woman in love, a viciously abused spouse and an unwilling participant in the brutal strangulations of 14-year-old Leslie Mahaffy and 15year-old Kristen French. Ultimately, though, she depicted herself as another victim of Paul Bernardo—one who lived to tell her sordid tale.

That was her story, presented under gentle questioning by Crown attorney Ray Houlahan. But her portrait of a woman controlled by a violent and manipulative husband will be vigorously attacked when Bernardo’s principal defence lawyer, John Rosen, cross-examines her in the first week of July. In fact, shortly after she began testifying on June 19, Mr. Justice Patrick LeSage advised the eight-man, four-woman jury that Homolka’s credibility is an issue because she is already serving concurrent 12-year sentences for her involvement in the crimes, and, in such circumstances, witnesses often tend to minimize their role. Later, he questioned her directly about a key part of her story—that Bernardo blackmailed her after she took part in drugging and sexually assaulting her sister Tammy on Dec. 23,1990, which led to the 15-year-old girl’s death. “Forgive me for asking,” LeSage said, “but wouldn’t he have put himself at the same risk by exposing you?”

Homolka’s evidence is a crucial part of the Crown’s case, along with 3x/2 hours of explicit homemade videotapes depicting the attacks on Mahaffy, French, Tammy Homolka and a fourth teenager identified only as Jane Doe, who survived and is expected to testify. And Homolka’s credibility is vitally important to senior officials at the Ontario attorney general’s office. They agreed in May, 1993, not to pursue more serious murder charges and to

let her plead guilty to two charges of manslaughter, in exchange for testifying against Bernardo. Homolka testified that the Crown extended the deal in mid-June of this year to include the Jane Doe incident—even though she did not reveal that the assault had occurred until October, 1993, several months after she was convicted and sentenced.

Over the past two years, Crown lawyers and police investigators spent hundreds of hours at the Prison for Women in Kingston, Ont., interviewing Homolka and preparing her to testify. And her much-anticipated appearance drew hundreds of spectators, who

lined up every day for the 118 seats available to the public. On the witness stand, Homolka depicted herself as a battered, unwilling accomplice, responding to dozens of questions by saying, “I did it to please Paul,” or “Paul made me do it.” But many spectators left unpersuaded by her story. “I think she’s an actress,” said Goretti Sozinho, a 30-year-old marketing production co-ordinator. “She says she was abused. But she wasn’t held at gunpoint” In fact, Homolka admitted to being powerfully attracted to Bernardo early in their relationship. They met in mid-October, 1987, when she was a 17-year-old highschool student from St. Catharines, Ont., and he was a 23-year-old university graduate living with his parents in Scarborough, a Toronto suburb. Initially, he treated her like “a princess,” she said. He bought her lavish gifts and took her to expensive restaurants.

But she quickly saw a darker side. Bernardo began physically abusing her and pressuring her to perform unusual sexual acts, Homolka said. She testified that, four months after they met, he convinced her to pose for a series of sexually explicit Polaroid photographs, which the Crown introduced as evidence. In one of them, he is having sex with her from behind while holding a rope tightly around her neck and pressing a knife to the side of her head. Homolka testified that she never really enjoyed these acts, and only participated to please Bernardo. Yet Houlahan introduced about three dozen greeting cards that she sent to her future husband between 1988 and the end of 1990, which contained handwritten notes, many of them promising to fulfil his desires. Houlahan introduced the notes to blunt their impact, giving Homolka a chance to explain before Rosen uses them to attack her. In most cases, she said that she was trying to keep a demanding g Bernardo happy, rather than express5 ing her true feelings.

§ Her explanation of the events leading up to the rape of her sister Tammy con| tained contradictions, as well. She 2 maintained that in the summer of 1990, * Bernardo began asking her to pretend to be Tammy while they were having sex, and eventually revealed that he wanted to have intercourse with the young girl. Initially, she was opposed. “He said he would wear a condom,” Homolka testified, “that nobody would get hurt, and Tammy would never know about it. In the future, he would be able to look at her and think he was the one who had taken her virginity. I finally agreed to it.”

But while insisting that she was a reluctant participant, Homolka admitted that the attack never could have occurred without her. She testified that she fraudulently obtained a prescription for sleeping pills known as Halcion, and she stole some Halothane, an anesthetic,

from the veterinary clinic where she worked. They administered the substances to her sister on the evening of the rape, which took place in the basement recreation room of the Homolka home, after her parents and her other sister, Lori, had gone to bed.

The rape ended tragically when Tammy choked to death on her own vomit, soon after Bernardo had finished having intercourse. Homolka testified that her sister’s death became a terrible secret that she shared with Bernardo, and that he used to blackmail and enslave her until she finally left him in early January, 1993. She described the last two years of their relationship as an abuse-filled nightmare that culminated in her own forced participation in the rapes and murders of Mahaffy and French. She said that after they rented a home together in early 1991, Bernardo beat her regularly and spat in her face and her food. At one point, she testified, he made her eat his feces. “I could do it and get it over with,” she said, “or I could get beaten and then do it.”

Homolka testified that she was so terrified of her husband that she did nothing to stop the attack on Mahaffy or to prevent her murder. She told the court that Bernardo was alone when he abducted Mahaffy in Burlington, Ont., in the early morning hours of June 15, 1991, a Saturday. He returned home between 3 a.m. and 4 a.m., awakened her and informed her he had a girl in the house. Homolka told the court that she remained in the couple’s upstairs bedroom for most of the day while Bernardo and Mahaffy were in the guest bedroom on the ground floor of the house. She insisted that she did not get involved in the sexual assault of Mahaffy, which was videotaped, until Bernardo decided she should participate at about 9 p.m.

Four or five hours later, early on the morning of Sunday, June 16, Bernardo decided he had to kill Mahaffy because he feared she could identify him, Homolka said. She admitted that she did nothing to stop him, that she ignored the terrified teenager’s pleas for help, which were recorded on videotape. Homolka testified that, while she was at work on June 17, Bernardo cut Mahaffy’s body into 10 pieces with a circular saw and encased the parts in concrete. He subsequently made her help him dispose of several pieces in a lake near St. Catharines, she said.

After five full days on the stand, Homolka still had to testify about the horrifying attack on Kristen French, which began with her abduction on April 16,1992, and ended with her death by strangulation three days later. Houlahan then intended to lead the Crown’s star witness through the final seven months of her relationship with Bernardo. He also planned to question her about the negotiations that led to her guilty pleas and 12-year sentences. Then she faces Rosen, who will undoubtedly try to dismantle her story, and paint an even more damning portrait of this perplexing and troubled young woman. 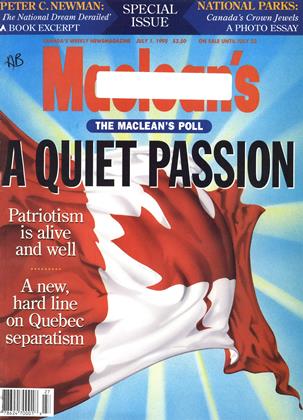