Hugh Grant has built his career on nervous charm. He comes across as a bashful schoolboy with an ever-sodelicate disposition. And there is nothing he does better than express embarrassment. In Four Weddings and a Funeral, he was funniest when reduced to a state of stammering, apologetic humiliation. After Grant’s recent arrest in Los Angeles for having sex in a car with a hooker, you can just picture him trying to explain himself to his girlfriend, model Elizabeth Hurley. While watching Nine Months, it is hard not to imagine that encounter.

Not since Woody Allen’s Husbands and Wives has a film had such ironic resonance with a scandal surrounding its star. In Nine Months, Grant plays Samuel, a man who has everything— a red Porsche, a lovely San Francisco home and a romance that has sailed along smoothly for five years. But Samuel has a chronic fear of commitment. When his girlfriend, Rebecca (Julianne Moore), announces that she is pregnant, he panics—and his callous behavior prompts her to leave him. Trying to win her back, Samuel pleads for forgiveness. “I’ve thrown away the most important thing in my life, just like that,” he says.

Inevitably, the life-art irony of Grant’s role raises some titters, but they are soon displaced by belly-laughs.

The movie was written and directed by Hollywood’s Chris Columbus, the maker of Mrs. Doubtfire and the Home Alone comedies. This is a film-maker who knows how

to push all the right buttons. -

Remaking Nine Months from the French film Neuf Mois (1994), he has created a fully loaded formulaic Hollywood farce. Going through wild mood swings, its trimester narrative grows from romantic comedy to antic comedy to flat-out slapstick, all swimming in an amniotic sac of sentiment.

Contrived though it may be, Nine Months delivers. It has some great comic performances. Punching the wind out of Grant’s British reserve is Tom Arnold, who plays an ebullient car dealer named Marty, the father of three brawling children. His wife Goan Cusack), who is expecting a fourth, becomes Rebecca’s ally in pregnancy. Jeff Goldblum is wonderfully droll as Samuel’s best friend, a bachelor artist. And Robin Williams, predictably, steals the picture as an obstetrician from hell, a Russian emigré who has only delivered animals.

There is a clear division of labor among the cast: the men kick around the comedy, the women nurture the drama. For most of the film, Moore and Cusack play it straight, defending motherhood, while the men act like goofs. In the double-childbirth scene that serves as the movie’s climax, however, everyone goes giddily over the top. It begins with a Bullit-like car ride through San Francisco. And by the time the crew reaches the hospital, Nine Months has turned into Carry On Doctor. What is remarkable is how Columbus squeezes both outrageous farce and teary-eyed drama out of the same scene—a miracle of birth indeed.

Like Hugh Grant, Nine Months takes its share of dumb detours. When the movie gets serious, a certain cringe factor sets in. This

is, after all, a romantic comedy

about a hero who falls in love—not with his wife, but with his unborn child. Yet once the comedy takes off, Nine Months has an irresistible charm.

In Nine Months, Hugh Grant’s character dreams that his pregnant mate turns into a giant praying mantis and devours him in bed. Species pushes that fantasy—the male fear of the procreative female —to a literal level. It is a sci-fi thriller about an alien predator who takes the form of a stunning blond named Sil (Natasha Henstridge, a 20year-old fashion model born in Newfoundland and raised in Alberta). Sil is a crossbreed, created by scientists who introduced some DNA from outer space into a human ovum. They made her female, hoping she would be more docile. Fat chance. Sil escapes and grows up to be a Terminatrix with a French kiss that can leave a hole in a man’s head. Her Frankenstein-like creator (Ben Kingsley) assembles a team to hunt her down—including an ex-Marine (Michael Madsen), a psychic (Forest Whitaker) and an anthropologist (Alfred Molina).

On the loose in Los Angeles, Sil is determined to mate, and discovers that baring her breasts speeds up the process. She is a femme fatale who turns into a hideous creature faster than you can say “computer morphing.” It is fun for a while. Australian director Roger Donaldson delivers some good jolts, and jokes. But a weak script leaves the strong cast floundering. And as the story degenerates into an endless kill-the-bitch climax, Species proves to be a retrograde experiment in the evolution of the genre.

It is the latest entry in the summer tournament of broadsword epics, after the kilted overkill of Rob Roy and Braveheart. And it is by far the most facile. First Knight is ostensibly based on the lore of King Arthur and his Round Table. The film-makers, however, have gutted the original legend and renovated Camelot to the point where it is barely recognizable.

The movie’s Lancelot (Richard Gere) is not even a knight when he meets Queen Guinevere Qulia Ormond). He is a vagabond nature boy,

a samurai who roams the forests and lives by his wits. Like some medieval Tarzan, he keeps popping out of the bushes to rescue Guinevere from marauding bad guys. What impresses her most is a trick that he does with a tree, channelling rainwater through a funnel of leaves directiy into her mouth. This Lancelot is Eco-Man on a white charger, a forest-friendly knight for the 1990s. Once he finally does join the Round Table, he never seems comfortable in the shining armor.

As King Arthur, a surly Sean Connery presides over his Camelot, which seems as clean-cut and contemporary as a Disney theme park. Strangely, there is no mention of Merlin. Painted cream and blue, the castle is a spectacular sight, but a little elaborate for the sixth century—it’s as though the film’s computer graphics team could not stop hitting the “turret” command. The knights’ rakish uniforms conjure up visions of Star Trek, and Arthur’s modular Round Table would not look out of place on the bridge of the Enterprise. At its centre bums an eternal flame, suggesting that First Knighfs liberal-democratic Camelot owes as much to the Kennedy legacy as to the Arthurian legend.

All of this bastardized mythology would be forgivable if the movie worked. But film-maker Jerry Zucker (Ghost) directs in a plodding, pedestrian style. The lavish battle scenes are a confusion of cutaways. The villain, a dark knight named Malagant (Ben Cross) who lives in a kind of bat cave, is a humorless bore. Gere, acting with a noncommittal hint of an accent, sheepishly smirks through his scenes. Connery looks as if he would rather be somewhere else. As Guinevere, a queen tom between her knight and her king, Ormond (Legends of the Fall) gives the movie’s one spirited performance. Meanwhile, the 91-year-old Sir John Gielgud is briefly carted out for no apparent reason—although, in this errant epic, his title serves as the only connection to true knighthood. 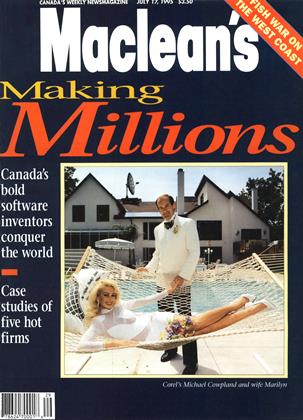