Old travel guidebooks to Yugoslavia—now little more than curious relics from a more innocent time—seldom dwelt upon the inland region now known as Krajina, the Serbo-Croatian word for frontier. Compared with the gorgeous Dalmatian beaches or the cosmopolitan cool of Sarajevo, the poor, barren land along Croatia’s border with western Bosnia drew little mention, and few tourists. “It is rocky terrain, with lots of scrubs, and you’ve got chickens and goats and mangy dogs running loose in the yards,” said Capt. John Shone of Canada’s Royal 22nd Regiment last week from the town of Rastevic, where peacekeepers monitored the movements of rival Serbian and Croatian forces. “Parts of Krajina are still medieval: people work their little

plots with scythes. And sometimes, if the sun hits right, you look up at the hills and think you’ve slipped back 600 years, and the 20th century has been grafted onto a peasant culture.”

That is the land that Croatia has sworn to recover ever since it had to cede the territory to the local Serbian majority in the 1991 breakup of Yugoslavia. After that turf war between the Serbs and Croats settled down, Croatian President Franjo Tudjman vowed repeatedly to take Krajina back by force if the international community did not broker a deal to put it peacefully back under Croatian

control. He even campaigned for re-election on the issue.

Zero hour for keeping that promise arrived last week. At 5 a.m. on Friday, Aug. 4, the worst-kept secret in the Balkans exploded into the open with an artillery barrage on “the occupied territory,” as the Croats call it. With 100,000 troops taking part in the invasion— double the forces of the Krajina Serbs—the Croats essentially resumed the 1991 war. At that time, their lightly armed militia had been outgunned by the local Serbs, who had backing from the well-equipped Yugoslav army. Last week, Croatia put a better-trained and - equipped force to the test, firing hundreds of artillery rounds into Krajina and moving swiftly to capture its main city, Knin. To the portrait of the region as poor and barren, add “smouldering.”

The Krajina invasion is a particularly dangerous development in the Balkan conflagration because of its potential to widen a war that has been largely contained inside Bosnia’s borders since 1992. It remained to be seen whether Bosnian Serbs or, more ominously, the Serbian-led Yugoslav army, would go to the aid of their Krajina cousins. But as the world pauses this month to commemorate and analyze the events of the Second World War that ended 50 years ago, the Balkans are a reminder of the persistent willingness of people to defy civilized norms and go to war to settle their differences.

Most Croats have long accepted the necessity of using force to reclaim their lost territory. And the Krajina Serbs, for the most part, remained undaunted by the obvious Croatian buildup over the past few weeks. “You ask the Serbs here why there should be more war, why there should be any more victims, and they just shrug and talk about what was done to them in the Second World War by the Croats,” says Supt. Claude Thériault, an RCMP officer from Montreal serving with the UN civilian police force (CIVPOL) in Krajina. “The kids especially are aggressive and ready to fight. They’ve been subjected to the local propaganda, and they claim to be prepared to die for the motherland and all that stuff.”

Last week’s heavy shelling and assault produced quick results for the Croatian army, which had its flag flying over Knin and the Serbian defenders split in two by Saturday. But that was not to say the fight was over. The Krajina Serb army has an estimated 250 tanks and 16 combat planes, as well as rockets that can reach Zagreb, the Croatian capital just 35 km beyond Krajina’s northern reaches. Before the first day of fighting was over, &ltone missile landed harmlessly in a M Zagreb suburb as the capital’s residents i went on full alert and airlines cancelled § their flights. Another unknown factor was

NATO, which launched an air raid on a Serbian radar position that locked onto its planes, but also threatened strikes against the Croatian army to protect UN peacekeepers. Three UN soldiers, from Denmark and the Czech Republic, were killed in the first two days of fighting, and the victorious Croats immediately confined the UN force in Knin, numbering about 500, to its base.

Krajina Serbs have a long-standing reputation as adept, tough fighters. They are mountain men of lore: a frontier people who came to the area some 500 years ago as escapees from invading Turks. When Croatia declared its independence from the Yugoslav federation in

1991, Krajina balked. The Serbs instead carved out their own selfstyled republic—still unrecognized by the international community—with a “capital” in Knin, a dusty railroad junction of 10,000 people. When that war sputtered to a truce, UN peacekeepers arrived to monitor a zone of separation between the two groups, and tried without success to arrange an economic partnership that might lead to a political settlement.

The situation deteriorated after May 1, when Croatia struck to regain Western Slavonia, another Serbian-held pocket inside its former borders. That successful 33-hour operation—which took place while the United Nations looked on but did not intervene—set the two sides in Krajina on course for last week’s more violent collision. Furious that the United Nations was standing aside for a Croatian advance, the Krajina Serbs effectively brought the UN mission in their region to a standstill and banned CIVPOL from policing the zone of separation. “The United Nations’ credibility was destroyed here by what happened in Western Slavonia,” said CIVPOL’s Thériault.

The Krajina Serbs had already conscripted all local men of military age, and they joined others who had earlier crossed the border into Bosnia to assist Serbs there in their still-unresolved battle with the Bosnian army for control of the Bihac pocket, one of the United Nations’ supposed “safe areas.” “People must understand that the Krajina Serbs have been fighting in Bihac with impunity for months and months,” said Thériault. “Every week, my landlord goes off to the front for a few days, then comes home for a break.”

It is possible, however, that fears of a wider Serbian-Croatian war are unfounded. Last week, Serbian President Slobodan Milosevic showed little inclination to join the fray in Krajina. Instead, he chastised the Serbs there for failing to reach a political settlement with the Croats. Once described as the Butcher of the Balkans, Milosevic has become intent in recent months on casting off his pariah status. Western governments have suggested their economic sanctions against Serbia could be lifted if Milosevic plays a peacemaker’s role in the region. And he has little affection for the Serbian leaders in either Bosnia or Krajina, who have drifted away from his sway. Indeed, many diplomats hinted last week that Milosevic was willing to let Croatia regain Krajina under an unspoken proviso: that Serbia could retain contested farmlands it now occupies in northeastern Croatia.

Such an agreement would probably be greeted by private sighs of relief in foreign capitals, where realpolitik has long since superseded morality as the cornerstone of policy. Restoration of Krajina to Croatia would resolve the most outstanding grievance of the war and establish a balance of power between the Balkans’ two strongmen, Milosevic and Tudjman. It would also allow the Croats to launch a massive attack on the Bosnian Serbs around Bihac, something the UN force has been loath to do. “The international community seems to have subcontracted its responsibilities to Croatia,” noted Robin Cook, the British opposition critic on foreign policy. Publicly, Britain, France, Russia and Canada all condemned the Croatian invasion, with Russia in particular accusing the United States of encouraging Croatian aggression. But those countries are also clearly eager to find a way to extricate themselves from what has become a Balkan quagmire. A Canadian diplomat in Europe underscored that mood last week by noting that the Liberal government in Ottawa was keen to get Canadian troops out of the region, but was prevented only by a desire not to annoy its allies in London and Paris.

The Americans barely even criticized last week’s invasion, urging only that the Croats take care to avoid civilian casualties. Last year, Washington brokered the deal for a political confederation between Croatia and the Muslim-dominated government of Bosnia. The United States has been Tudjman’s patron ever since, supporting his demand to recover the lost territories. When Bosnian and Croatian leaders signed a military pact in the Croatian resort city of Split on July 22, U.S. ambassador Peter Galbraith appeared in the official photographs, a sign of American endorsement. Within days, the two sides launched a joint attack on the Bosnian Serbs—a portent of last week’s larger campaign. All the speculation may signal that the latest Balkan war is in its final throes. But, as usual in the region, the conclusion seems about to be written by armies in the field, rather than by negotiators around a table. □ 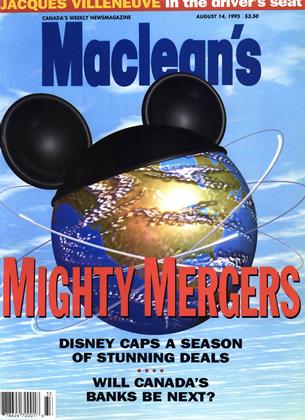