Along with what they say about analyzing and commenting on literary or artistic work, dictionaries assure us that criticism means the action of criticizing or passing judgment (especially unfavorable) upon the qualities of anything. No revelation there. The question is whether criticism can then be said to encompass anything that anyone might ever choose to say about a public official with negligible risk of the critic being sued.

It was to the proposition that every Canadian has an unchallengeable right of criticism that the Supreme Court of Canada delivered a sharp—but, at 173 pages, not terse—answer on July 20. Essentially, the court’s message was, “Criticism, yes, but accusations rooted in non-facts that do gratuitous damage to the reputation of individuals, no.”

The court’s response was primarily to a libel finding against the Church of Scientology and a Toronto defence lawyer, Morris Manning, who had been sued for remarks about an Ontario Crown attorney. An Ontario court had awarded damages of $1.6 million, the largest award ever in Canada in a libel suit, and that decision was reaffirmed on appeal. The defendants then turned to the Supreme Court, with the same result.

But the court’s message was also to the media, which were present in the courtroom as interested parties—intervenors. By their demonstrated interest in the case, the media had encouraged Scientology in arguing that Canadian libel law contradicts the 1982 constitutional guarantee of freedom of expression. The effect, the media have maintained, has been to create a fear-induced “libel-chill,” which may cause newsworthy stories to be suppressed.

The media also encouraged the notion that the time has come to make Canadian libel law more American—which is another way of saying easier on the media. A consequential difference between the two sets of law as they stand is found in cases involving public officials. (The plaintiff in the Church of Scientology affair, Casey Hill, was an Ontario Crown attorney at the time, and is now a judge.) The difference is that, in Canada, a public official is treated as any other citizen; in the United States, a public official must demonstrate that an allegedly defamatory statement was not just untrue, but that it was untrue due to malice or reckless disregard for its truth. Since those are not easy things to prove, American reporters or commentators flirting with libelous language have less to worry about.

In Canada, that is turned around, with the whole approach to libel being more sympathetic to the party claiming injury than in the United States. That comes from what is called “the reverse onus.” It means that any Canadian broadcaster or publisher proposing to rely on the defence of truth in a libel suit—the surest defence of all—must be prepared to prove it; it is not the plaintiff’s responsibility to prove untruth.

The July 20 judgment, written by Justice Peter Cory was joined 7-0 by the rest of the court. It said the law provides an appropriate balance between protecting people’s reputations and ensuring the freedom of the media—which see themselves as guardians of the public’s right to know what might never come to light but for them. In vulgar language—mine—the court was saying to the media, “That guardianship of yours, noble as it may be, will have to be performed without the notion implicit in American legal thinking that a little bit of defamation in a good cause is not a sin.”

Cases do not float up to the Supreme Court of Canada on their own. Since the 1970s, the court has controlled its own docket, with its main criteria for hearing cases being that they should involve an issue of broad public importance and legal significance. In the early stages, Hill versus Church of Scientology and Manning was a fairly straightforward libel case. The essence of the allegations against Hill was that he misled a judge and breached a court order that impounded some 200 Scientology documents—and that he ought to be cited for contempt of court. Those allegations were persisted in even after they were known not to be true.

It is reasonable to assume that it was the broad public importance of the issue of media rights, rather than anything of legal principle in the process, that put the case on the Supreme Court docket. Ensuring the broadest possible interpretation of freedom of the press has been a media enterprise as long as there has been a Charter of Rights to give freedom of the press formal recognition. Obtaining a looser law of libel, at least by undoing the so-called reverse onus, was a key objective. Now the Supreme Court having said the law as it stands makes a good balance and, in effect, that no convenient Americanization is necessary or desirable, the media find themselves faced with the need to persuade Parliament to rewrite the law itself—and to concoct reasons why it should do so in the face of a strong decision by the Supreme Court.

It was enough to make anyone ask what such a nice bunch of nationalists was doing in a place like that, giving comfort to people arguing for the Americanization of Canadian law. 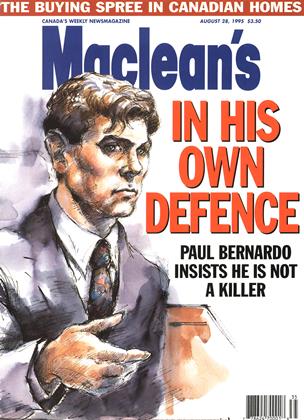