On a sunny afternoon in Maria Hernandez Park, clusters of elderly residents sit reading newspapers and watching a young mother push her baby carriage. The relaxed urban scene would have been unimaginable as recently as two years ago, when the park functioned as an open-air bazaar for heroin, crack and cocaine. Located in the heart of Brooklyn’s Bushwick neighborhood, the park is named for a local woman who was killed accidentally by the trigger-happy drug dealers who once dominated the area. But now, a trailer propped up on concrete blocks stands nearby, providing the New York Police Department with a high-visibility presence. “There used to be all kinds of drugs, fights, robberies, everything around here,” says Connie Aviles, who runs a hair salon a half-block from the park. “Everything is much quieter since they put that trailer in.”

The rebirth of Maria Hernandez Park is part of a trend that has been observed throughout New York City, a place that has long been synonymous with out-of-control crime. The city is still far from tranquil. But police statistics show that all types of reported crime are down this year in every one of the city’s 76 precincts—to the safest levels in 25 years. From January to July, the citywide murder rate dropped 31 per cent over the same period last year. Robbery is down almost 22 per cent, burglary 18 per cent, auto theft 25 per cent and assault six per cent.

Most major U.S. and Canadian cities have also reported lower crime rates this year, but the decline in New York has been going on longer and is far steeper than almost anywhere else. Since early 1993, the murder rate has dropped by more than 37 per cent, robbery by 31 per cent and auto theft by 36 per cent. Overall, the number of serious crimes has fallen by 27 per cent in the past two years. Those statistics have brought the city a blizzard of attention from academics and law enforcement officials—including U.S. Attorney General Janet Reno, who has ordered a study to find out what is behind the trend.

Criminologists say crime is falling all over North America in response to changing demographics and a shift in the drug market away from crack cocaine. As baby boomers age, there simply are not as many angry young men committing crimes, say some experts. Still, New York’s police say they deserve most of the credit for the drop in their city’s crime rate. “We don’t think what has occurred here in the last 18 months has been significantly impacted by any of those other factors,” says Police Commissioner William Bratton. “It’s the way the department is now policing the city.”

The past five years have seen the ranks of New York’s police force swell by an additional 7,000 officers to more than 38,000. But perhaps equally important have been the sweeping changes Bratton, a former Boston police commissioner, has brought to the

NYPD since he was appointed chief in early 1994. From his command post in an imposing blue-carpeted office in the downtown Police Plaza complex, Bratton, 47, appears more like a Manhattan executive than a street cop. He is a keen student of management theory and believes that it can be applied to police work. “I’m trying to run the NYPD as you would a private corporation,” says Bratton. “Criminals are our competition. In the private sector, you always keep an eye on what your competitors are doing and try to stay one step ahead of them.” Bratton has brought in computerized maps to track crime patterns day by day. He has pushed drug squads and other specialty units to work beyond their former nine-tofive hours. And he has gotten tough with officers on the ground. Once a month, precinct commanders are summoned to meetings with Bratton and other top police brass and grilled on crime patterns in their neighborhoods. “If you’re a precinct commander, you had better know what’s going on in your area,” says Bratton. “If you don’t, you’re out of there.” He is not bluffing. Since taking office, the new commissioner has replaced

three-quarters of these local police bosses.

Bratton’s strategy is to shift the department’s focus toward community policing and promoting an atmosphere that makes crime less likely in the first place. That means cracking down on petty offences such as graffiti and drinking in public. Mayor Rudolph Giuliani, a former federal prosecutor, made combating such “quality of life” crimes a major plank in his 1993 campaign. Giuliani hand-picked Bratton to carry out his program and has since worked closely with him. Both men say that tolerating public disorder creates a street environment that intimidates law-abiding people and opens the way for more serious crimes. So far, their theory appears to be correct. Police are finding that people arrested for minor violations often turn out to be armed, already wanted on other charges, or both. In 1993, one out of every 438 people arrested for riding the subway without paying was carrying a loaded gun. Now that police routinely frisk such people, the figure has dropped to one in every 1,034.

In Manhattan, police are also getting a hand from so-called business-improvement districts (BIDs), groups that collect fees from firms in a specific area to provide extra sanitation, lighting and security services. Since they began in 1988, BIDs have multiplied to cover much of midtown and downtown Manhattan. The extra lighting and hundreds of security guards have had a clear impact in formerly crime-plagued areas such as Times Square and Grand Central Station. Even in poorer areas, observers say there has been an increase in community action to clean up blighted blocks and improve building security. “It’s part of how people are adapting to fear,” says Marie Rosen, publisher of Law Enforcement News, a magazine that covers policing. “You either avoid it by buying extra locks and not going out at night, or you get organized.”

But criminologists are not convinced that police patrols and civic-minded citizens are responsible for the change. Most believe that the crime rate is largely determined by the number of young men in society at a given time. Across the continent, the number of 15to 24-year-olds has been dropping in recent years, a normal trough in the demographic cycle that may account for the lower figures. "The largest group of our population, the 75 million baby boomers, are middle-aged now,” says James Alan Fox, dean of the College of Criminal Justice at Boston’s Northeastern University. Fox adds that New York’s crime rate “probably would have gone down no matter who was commissioner.”

Other experts believe that urban violence has declined because the turf wars between crack gangs that wreaked havoc in in the 1980s have now largely been settled, leaving many of the gang members either dead or in

jail. Richard Curtis, an anthropologist who studies drug use, say that crack is no longer fashionable among inner-city teenagers. “When you see your older brother knock a gold tooth out of grandma’s mouth so he can buy a rock [of crack cocaine], it doesn’t seem so cool anymore,” says Curtis.

Whatever the reason, the result is a new feeling of security for many New Yorkers. Central Park, previously off-limits to lawabiding citizens at night, is now comparatively busy after dark, with cyclists and families out for a stroll on many of the better-lit

trails. “I feel much safer here now because of all the rollerbladers,” says Ray Harris, a 79-year-old woman out for an evening stroll through the park. In some other areas, however, residents says they see little if any improvement. “There’s always shootouts in the parking lot of my building,” says Ivette Pozada, an office manager who lives in Brooklyn’s hard-bitten Brownsville district. Gay and lesbian groups, meanwhile, report a rise in attacks in the past year. There has also been an increase in police violence. The NYPD’s own statistics show that police shot dead 31 civilians in 1994, up from 23 in 1993. And according to the Civilian Complaint Review Board, the number of complaints about police harassment and brutality jumped 37 per cent last year, to 4,920. Most of those complaints originated with African-Americans and Latinos, a trend that angers local minority leaders. “It is unacceptable that we are being told the price for decreasing one type of crime is increasing another,” says Richard Perez, national co-ordinator of the National Congress of Puerto Rican Rights.

Skeptics also point out that the recent fall in the crime rate is impressive mainly in relation to the explosion of crime that began in the 1980s and peaked in 1990 with an all-time record of 2,245 murders. Moreover, the coming decade will bring an increase in the teenage population—including an unprecedented proportion of poor teens from singleparent families. That, experts say, will inevitably lead to an increase in youth crime. The NYPD’s Bratton, however, calls the demographic argument “baloney.” He cites figures that show that the city’s population of 15to 24-year-olds has gone down only 3.3 per cent since 1990, far less than the drop in the crime rate. Says Bratton: “We believe that what’s happening here will over time disprove a lot of these commonly held theories. Barring another type of crack cocaine epidemic, there is an ability to manage crime.”

Even good management is not always enough. The Bratton-era police trailer in Bushwick’s Maria Hernandez Park failed to prevent the murders of three people within a few weeks this summer. But, by New York standards, the neighborhood does seem to be on the road to recovery. “You couldn’t even sit outside before,” says resident Vera Atkins, 59. For New Yorkers like Atkins, it does not matter much whether the new secure feeling comes from a corporate approach to crime-fighting or merely demographics. As long as it lasts, they are breathing a little easier. 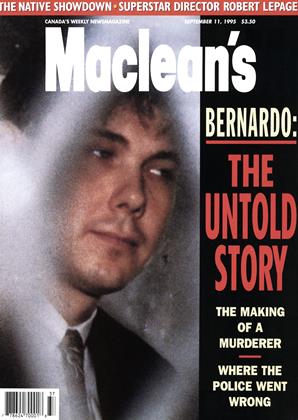