Jozef Krop, a doctor in Mississauga, Ont., first realized that he might be in trouble in January, 1989. That was when an official of the College of Physicians and Surgeons of Ontario

wrote to him demanding information about Krop’s practice, which includes some kinds of therapy not recognized by the college.

Nine months later, a member of the college arrived at Krop’s office, questioned him for five hours and seized documents dealing with 29 of his patients. Finally, in June, 1994, the college laid charges against Krop, alleging, among other things, that the Polish-born physician used a number of “inappropriate” techniques and displayed a lack of knowledge and skill amounting to incompetence.

Since then, the case against Krop has been bogged down in legal technicalities, with Krop’s lawyer seeking—unsuccessfully—to find out what prompted the investigation. So far, Krop has spent about $30,000 of his own to defend himself, plus another $95,000 raised by supporters. “I am being harassed by a kangaroo court,” he says. “I am facing the equivalent of a death sentence—the possible loss of my medical licence—and I cannot even find out who my accusers are.”

Krop is not alone. At least 15 Canadian doctors are currently facing disciplinary action by their colleges of physicians and surgeons at least partly as a result of practising various forms of unconventional medicine. The rash of investigations and prosecutions comes at a time when more and more Canadians are turning to such practitioners. The medical colleges, which have the power to investigate and discipline members, insist that they are acting to protect the public from quacks and incompetents.

But many practitioners of alternative, or complementary, medicine claim that the colleges have been prodded into action by allergists, respirologists and other specialists who fear that their medical turf is being invaded. Dr. Zig Strauts of Surrey, B.C., is one of seven physicians in the province under investigation for using chelation therapy, a form of treatment that advocates claim can help heart disease victims and others by flushing heavy-metal deposits from their blood vessels. The B.C. College of Physicians and Surgeons, says Strauts, “is catering to pressure from the cardiovascular specialists—and they are acting against the public interest.”

There is no denying that thousands of patients remain fiercely loyal to practitioners of alternative medicine. Pearl Rimer of Toronto says that her young son Jonah’s respiratory problems, which included asthma and frequent chest infections, did not improve under conventional treatments. But then her mother saw a television show that mentioned Jozef Krop. Three years ago, Krop began treating Jonah by recommending dietary changes and administering other alternative remedies. Now Jonah, 9, is almost symptom-free. “He is no longer chronically ill,” says Rimer. “The improvement is quite amazing.”

In Montreal, two doctors currently face disciplinary action by the

Quebec College of Physicians over alternative medicine. After about 10 days of hearings before the college’s disciplinary committee, Louise Comeau and Paul Drouin are waiting to find out whether they will be found guilty of charges that they used diagnostic techniques “contrary to the principles of medical science.” The former medical partners, who practised conventional medicine as well as homeopathy and naturopathy, were charged after they began using high-powered microscopes to analyze patients’ health by examining blood samples. In another, highly publicized case, Dr. Guylaine Lanctôt, a physician who stopped practising medicine a year ago, is appearing before the college’s disciplinary committee on charges of disseminating “wrong and misleading information” in her book The Medical Mafia, published in January. Although Lanctôt says that she never practised alternative medicine herself, her book criticizes many of the basic beliefs of conventional medicine—such as the widespread assumption that HIV causes AIDS—and chastises the medical establishment for attacking doctors who practise alternative medicine. “The existing medical system is designed to make people sick,” Lanctôt told Maclean’s, “because that way there is more money to be made.” Some of Lanctôt’s views are even more extreme. She claims, for example, that vaccinations can actually

make people sick and that vaccination programs encourage “the moral and financial dependence of Third World countries” on the industrialized nations.

Ontario’s College of Physicians and Surgeons has focused its attack on doctors who practise forms of environmental medicine. Those doctors maintain that exposure to environmental pollution can cause numerous illnesses, which can in turn be treated “holistically” by therapies that include the use of vitamins, dietary changes and avoidance of exposure to pollutants. In April, after 10 days of hearings, the Ontario college found a Toronto physician, Dr. Felix Ravikovich, guilty of professional misconduct. Much of the testimony at the inquiry focused on Ravikovich’s use of tiny injections of histamine—a chemical produced in the human body—to treat asthma and other allergic conditions. In its ruling, the college declared that the treatment had “no proven medical or scientific validity.” In sentencing Ravikovich, the college ordered, among other things, that he be officially reprimanded and barred from using histamine treatments.

In both Alberta and British Columbia, the colleges of physicians and surgeons have targeted doctors who practise chelation therapy. In the mid-1950s, Ottawa’s Health Protection Branch approved the use of a drug—known as EDTA in chelation therapy—to treat conventionally diagnosed cases of heavy-metal poisoning. But medical authorities in the two western provinces maintain that some doctors are going beyond the federal guidelines by attributing many other illnesses to environmental factors, and treating them with chelation. In fact, according to Surrey’s Strauts, the amount of heavy-metal contamination affecting human health “is pervasive and increasing.” The metals, he says, include arsenic, cadmium, copper, iron, lead, manganese and nickel. “I’ve had patients facing heart surgery,” says Strauts, “and after we’ve treated them with chelation, they no longer need surgery. My feeling is that you should try less-risky procedures 2 first, and if they don’t work you can still have surgery.” o Officials of the B.C. college insist that they are keeping an open s mind about chelation. According to Dr. Morris VanAndel, deputy

'The issue is the right of patients to choose the treatment they want, rather than being restricted to what the college says they can have’

registrar of the college, the reason that doctors in the province who practise chelation are being investigated is “to find out more about chelation—whether it is good or bad.” Meanwhile, Strauts’s lawyer has gone to court, arguing that the college has no right to investigate the use of a federally approved medical procedure.

In Alberta, a lawyer for Dr. Ken Wiancko, an Edmonton surgeon who also administers chelation therapy, is trying to find out why the provincial college is investigating his client. Officials of the Alberta college will not say how many doctors in the province are under investigation, but Wiancko says that six doctors who practise chelation “are being attacked and their medical licences threatened.” The issue, adds Wiancko, “is the right of patients to choose the treatment they want, rather than being restricted to what the college says they can have.”

Why does the Canadian medical establishment seem so hostile to alternative medicine? For the most part, officials of the provincial colleges refuse to discuss the issue while investigations or legal proceedings are under way. But Dr. Roy Fox, director of Dalhousie University’s environmental health clinic in Halifax, notes that the medical profession “does not rapidly embrace change. There is often tremendous opposition to new ideas, including things that eventually become an accepted part of medicine”—such as the now-accepted belief that germs cause disease, a notion that was resisted by many 19thcentury doctors. In the case of environmental medicine, says Lynn Marshall, a physician and University of Toronto researcher, doctors remain resistant to the idea that low-level environmental pollution can cause illness. “I’m concerned,” says Marshall, “that some doctors take the attitude that if something is not taught in medical school, it doesn’t exist.”

Still, much of the controversy over alternative medicine centres on the question of whether there is any scientific or medical basis for many of the techniques used. For example, Toronto’s Krop and some other environmental medicine practitioners use a Germanbuilt machine called Vega to help determine patients’ sensitivity to natural and manmade substances. During a test, the patient holds a metal cylinder at the end of a cable running from the machine, while another cable is placed in contact with the patient’s foot. With that, the patient forms part of a low-voltage electric circuit generated by the battery-powered machine. The person administering the test then places a glass bottle containing a diluted sample of the substance being tested, such as ragweed pollen or an industrial chemical, on a metal plate that is part of the machine. According to Krop, the distinctive vibrations of the substance are communicated to the patient’s nervous system through the current. A dial on the Vega machine indicates whether or not the substance is harmful to that patient.

Mainstream doctors dismiss the Vega machine as pseudoscientific nonsense, and even Krop admits that he cannot explain how it works. Practitioners of alternative medicine argue that well over half the therapies used in conventional medicine have no proven scientific validity—a claim that is rejected by mainstream medical experts. “The dilemma,” says U of T’s Marshall of the Vega machine, “is whether you should use something that seems to work, even if you don’t know how it works.” While the medical colleges say they are trying to protect the public from charlatans, Krop argues that they are fighting “a turf war, trying to protect their territory. The real issue here is whether patients can have freedom of choice, because some people want complementary medicine.” 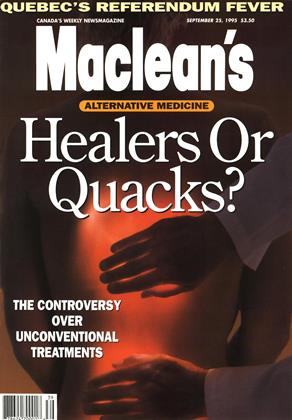