The mergers and acquisitions game has finally

gone too far. In the holy name of “strategic positioning,” billions of dollars in corporate assets are being flung about at a dizzying

pace. But now, the top brass at Philip Morris, the New York City-based branded products behemoth, have pushed the feeding frenzy to its limit: they have delivered the caramel and marshmallow divisions of Kraft Foods into the hands of utter strangers. Even by the standards of bloodless multinational corporations, this is an act of shocking callousness. After all, these are the traditional comfort foods of childhood. And both marshmallows and caramels are core ingredients for the entire jellied-salad school of North American cuisine. But so far, nothing has been disclosed about the miscellaneous band of ‘Texas and California investors” who have snapped up these valuable properties for an “undisclosed

sum.” All we know for certain is that caramel and marshmallow sales only brought in about $200 million last year, and that’s just not enough for the managers at Philip Morris, makers of Marlboro cigarettes and Maxwell House coffee. This is not to say a harsh word against com-

petitiveness, productivity, paradigm shifts and the other management mantras of this decade. It’s just that a rather clinical coldness is creeping into the increasingly big picture. The Mounties are in the hands of the Disney empire and are now demanding that Canadian children’s authors apply for a licence to write about them. Jet-Puffed marshmallows are now the domain of an investment syndicate. The exception to this rule, of course, resides in Calgary. There, the energy business is going through the same crush of mergers, acquisitions and rationalizations as every other sector is. But at least in the oilpatch, you can still find feisty guys like J. C. Anderson: while large, muscular companies everywhere are swallowing their smaller siblings in greedy gulps, J.C. is trying to take over $815-million Home Oil Ltd., a company that is significantly larger than his. It’s not very often that J.C. makes the trip to “Mecca” as he refers to Toronto and the concrete canyons of Bay Street.

And even with his burly form squeezed into the requisite houndstooth suit and glossy fringed loafers, he definitely looks like a boots-and-big-beltbuckle kind of guy. The impression that he

is a refugee from the cast of Dallas was not dispelled at a recent presentation to Bay Street types where he bellowed a welcoming “Howdy” as slick-haired brokers glided into the room. Without further ado, J.C. began to explain that he wants public shareholders to “stay in the saddle” while Anderson Exploration Ltd. makes its play for Home Oil. He assured the group that the takeover is “not some management ego trip” and he didn’t “just fall off the turnip truck.” In fact, he noted that he had been preparing a bid since March, when “the fox snuck into the henhouse.” The fox, in this case, is Amoco Petroleum Co. Ltd., which offered $757 million in cash for Home in June. Both bids expire on Sept. 7,

and the competition is fierce—if folksy. As the deadline approaches, however, there is no doubt that J.C., despite his drawl and his alarming briefcase, which appears to be made from the hide of some endangered species, has carefully calculated which but-

tons to push. He vowed that, if given the chance to “bang the companies together,” he would cut costs by ridding Home of its “air force” as well as closing its executive dining-room. The marketing of Anderson Exploration’s bid is critical to its success. That is because Amoco is offering cash and J.C. is offering paper—1.38 shares of Anderson in exchange for every outstanding share of Home. And as his stock price fluctuates in daily trading, so does the value of his offer. That means J.C. must convince investors that he can add value—and spice— to Home Oil’s assets. And that the upside he can create will be worth more in the long term than a mitt full of cash today. But in the end, whether Anderson Exploration wins Home Oil or not, J.C. deserves honorable mention for bringing some badly needed spark and personal style to the recent round of corporate mega-deals. Now, if only a guy like that would consider branching out into the caramel and marshmallow business. 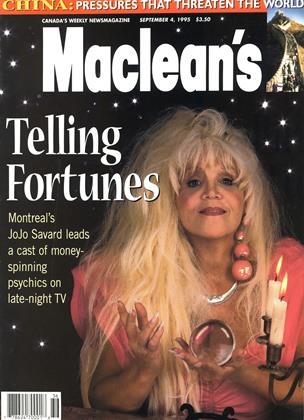