In terms of sheer dullness, few events can hold a candle to the annual meeting of a Canadian chartered bank. The air in the hotel ballroom is inevitably stale. Ditto for the egg salad sandwiches. Every once in a while, an impassioned shareholder or an irate smallbusiness client jolts awake after a droning slide presentation of the balance sheet and staggers to a microphone with a cranky question or a groggy complaint. That’s about as zippy as things get.

So it’s all the more unusual—and commendable—that Matthew Barrett, the chairman of the Bank of Montreal, deliberately courted controversy at his own annual meeting on Jan. 15. In a random act of executive bravado, Barrett took the bluntest corporate stance to date on the drastic economic consequences of letting Quebec drift away from Confederation. And he exhorted Canadians to get off the bench and back into the game of building national unity.

Barrett is a seasoned senior executive who was born in Ireland, joined the Bank of Montreal in London when he was 18 and came to Canada to work in the bank’s Montreal office five years later. So it’s possible that nobody told him that Canadian CEOs just don’t do that sort of thing. They squirm on the fence. Or they make funny little throat-clearing noises when directly confronted with a touchy issue. And if they do rock the boat, it’s almost always by accident.

But Barrett’s provocative proclamation was certainly no accident. In gory detail, he spelled out the costs of letting the issue slide. Based on an analysis by the bank’s chief economist, Tim O’Neill, he warned that Canada could forgo up to $200 billion in gross domestic product—among other things—if it splits apart.

A cynic might suggest that the Bank of Montreal spin doctors were just trying to deflect public attention away from the bank’s record earnings—and Mr. Barrett’s toothsome pay packet ($2.1 million in 1995). Nevertheless, cynics who doubt the daring of such a hard line should

harken back to the Charlottetown referendum of 1992. And to the Royal Bank of Canada’s ill-fated trek across this same treacherous swamp.

During the campaign in that earlier national referendum on proposed constitutional change, the Royal Bank released an economic study that set out the consequences of Quebec’s separation. It predicted that unemployment would soar and Canada’s standard of living would fall dramatically. The Royal took a lot of heat for dabbling in politics. As a result of that drubbing, most of corporate Canada—including the Bank of Montreal—firmly buttoned its lips during last October’s reprise.

Whether or not you buy the Bank of Montreal’s dire economic forecasts, which are based on pretty broad extrapolations from past panic attacks, it’s refreshing to hear from a business leader who cares enough about this country to speak out It’s heartening to know that some senior managers are willing to use their clout and their public profile to venture a strong point of view and even take some lumps for it In a recent editorial in The New York Times, U.S. Labor Secretary Robert Reich lamented the passing of an age when chief executives were “industrial statesmen” with a strong bond to the community and to their employees. He mourned the fact that international competition, electronic capitalism and greedy shareholders have transformed business leaders into “bloodletting gladiators” obsessed with profit.

Reich is right. It’s a shame, if inevitable, that the traditional ties between countries and companies have frayed to such an extent. But if we want to nurture their commitment to our community, if we want to benefit from their investment, we shouldn’t be so quick to dismiss or to trample the free expression of executive opinion. Business leaders should be encouraged to connect with national issues and to plug into debates that affect their operations—even if it edges into politics. At the very least, it will make annual meetings infinitely more interesting. 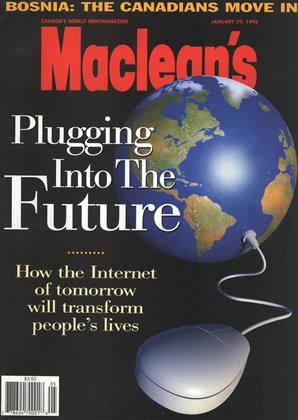