To the 3,000 protesters who marched through the streets of tiny Kaitaia in New Zealand’s Far North in late August, the case of 81-year-old Harry Findlay gets to the heart of what their country’s election this weekend is all about. To some Canadians, it may seem the Ghost of Elections Future—should Canada fully embrace New Zealand’s oft-cited experiment in downsizing the welfare state. Findlay’s wife of 54 years, Ila, 84, lies helpless in the local public hospital, a victim of Alzheimer’s disease. The local health authority is taking him to court because he has stopped paying its $601 weekly bill for her care. Harry, who now owes more than $37,000, says they both paid taxes all their working lives when New Zealand had a free health system and he should not be forced to spend all his savings in her dying years.

In the same hospital, the government pays the cost of 24-hour care for an equally helpless man because he was critically injured in a car crash. The authorities say the road victim is “clinically ill” and therefore entitled to free care. Alzheimer’s, they say, is an “age-related condition” and Harry must pay for Ila—like all other long-stay patients over 65 with assets. Harry—who says, “I had never protested about anything before, never”—is prepared to go to jail rather than pay up.

Opinion polls show that New Zealand’s radically revamped health-care system is the No. 1 issue in the Oct. 12 election, which most analysts believe is too close to call. Prime Minister Jim Bolger is a champion of New Zealand’s 12-year-old economic revolution, in which one of the most regulated economies in the non-Communist world has become one of the freest. In the process, its growth rate has soared, unemployment has fallen and the government accounts now post a surplus. But the left-leaning opposition is hammering hard at how budget-slashing, downsizing and the commercialization of social services have hurt New Zealanders like Findlay.

Under the reforms, the public health system was redesigned to run on commercial lines, with users paying for many services that were previously free. Public hospitals serving small rural communities were closed. The rest were renamed Crown Health Enterprises, or CHEs, and businessminded managers were brought in to run them. They must compete for government funds with each other and with private hos-

pitáis, which are allowed to bid for operations funded by the state system. The aim was greater efficiency and, the government promised, the best public health service in the world.

The reality has been a rise in public hospital waiting lists from 67,000 three years ago to 94,000 today, despite an extra $1 billion in health spending in the same period. Health Minister Jenny Shipley says more operations are being conducted than ever before, but operating rooms are idle at times because surgeons have exceeded their permitted quotas and their CHEs have run out of allocated funds. Today, as confidence in the public system continues to fall, New Zealand has a full-blown two-tier health system. An estimated 1.5 million of the country’s 3.6 million people are now covered by private health insurance.

Bolger, whose conservative National Party has governed since 1990, responds to his critics by pointing to the country’s overall performance. Having moved the budget into surplus for the first time in nearly two decades and cut income taxes in July, Bolger promises that “the best is yet to come.” His administration, which has held on shakily since being reelected with a one-seat majority in 1993, predicts continued economic growth, future surpluses “as far as the eye can see,” more tax cuts over the next two years and a better health service.

But polls show voters are not convinced. While Bolger’s party has virtually unqualified support from the business community, there is wide public concern about the effects of the reforms on such services as health, education and public housing. The opposition parties argue that New Zealand’s freemarket policies have benefited the rich most and created an underclass living in a state of poverty unseen since the Great Depression. They cite an eight-fold increase in Salvation Army food parcels to the poor since 1990, a rise in povertyrelated diseases such as tuberculosis and scurvy, and teachers’ tales of hungry kids at school. The budget surplus, they say, should be used to restore benefits that were cut by up to 25 per cent in 1991. Some $600 million of this year’s nearly $1 billion worth of tax cuts, they complain, went to the top 20 per cent of income earners. “There is deep inequality in New Zealand,” says Jim Anderton, leader of the left-wing New Zealand

Physically and politically, New Zealand may be most similar to British Columbia. Both have mild weather, fjords and highly polarized politics (New Zealand even had an Alberta-modelled Social Credit party for several years). But economically, New Zealand is in a class of its own. A recent study showed it had made the greatest changes to its economy of 23 industrialized countries in the past decade. Canada ranked 18th. A comparison:

Alliance. “We have lost our soul as a country.”

Canadians in the country see things less starkly. “There is no question that some people are poor,” says Ken Coates, a British Columbian who is now a professor of history at Waikato University in the North Island city of Hamilton. “But there are very few signs of the level of poverty you would see in an American inner city.” Moreover, adds Neil Quigley, a professor of money and finance at Victoria University of Wellington, “there is still a substantial welfare net in New Zealand to protect the needy.” In fact, 19 per cent of all working-age people still receive some form of state support. Quigley, who formerly taught at the University of Western Ontario, believes the reforms have strong support. “Across the economy as a whole,” he says, “there is no doubt that a substantial majority of people think most of what has been done in the last decade is good.”

The election, says Coates, has come down to “a classic tug of war between forces for the status quo and for nostalgia.” On one side is the National Party and such past or potential coalition partners as United New Zealand, the Christian Coalition and the ultra-free market ACT (formerly the Association of Consumers and Taxpayers); they favor continuing a hands-off approach to managing the economy. On the other is the Labour Party—which ironically launched the reform process in 1984 before being thrown out in 1990—along with Anderton’s Alliance and the nationalist New Zealand First. All back a measure of old-fashioned socialism, including restoring government intervention to some degree; all would abolish asset-tested fees for geriatric patients like Ila Findlay. The Alliance would go further, reintroducing totally free health care and education, a policy Labour—which claims to be as fiscally responsible as the Nationals—says the country cannot afford. The three left-leaning parties have major policy differences and refused to negotiate a pre-election pact.

The voting itself represents an experiment almost as dramatic as the country’s economic revolution. It will be the country’s first election under a new system of proportional representation, ending 144 years of Canadian-style first-past-the-post balloting. That in turn will almost surely lead to a coalition in the unicameral Parliament. No single party is likely ever again to have the power to push through change as sweepingly and rapidly as Labour and the Nationals did.

To Bruce Brown, a former New Zealand High Commissioner to Ottawa, Canada’s federal system—and its people—work against enacting such a total revolution on a national basis. “Canadians are much more conservative,” he says. “I don’t think they will bolt for freedom in the way we did.” But as they struggle with many of the same issues, Canadians would be wise to watch what happens next to the revolutionaries. 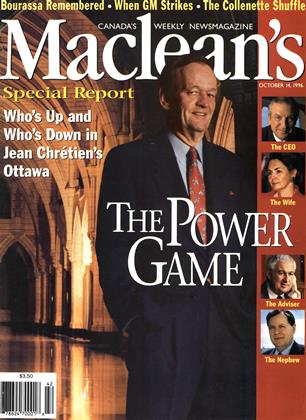