Nature has always been an underlying theme in the career of Canadian painter Jean-Paul Riopelle. So it seems fitting that the ailing 73-yearold—the country’s most acclaimed artist ever internationally—has chosen to live out the last days of his life on Ile-aux-Grues (Crane Island), a secluded, picturesque spot in the St. Lawrence River 80 km northeast of Quebec City. Confined at least some of the time to a wheelchair because of advanced osteoporosis, Riopelle is in a state of severe depression over his physical deterioration. “Like many people in his condition, JeanPaul has essentially lost the will to live,” says longtime friend and retired Montreal physician Champlain Charest. “His life is not in danger; he could live the way he is for a long time. [But] he is not a well man.”

Serious health problems do not appear to have completely extinguished the creative spark of an artist who has produced as many as 5,000 works over the past 50 years. On Nov. 14, Riopelle’s latest—and possibly last—creation will be unveiled at the Montreal Book Show. Entitled Le Cirque, the work is a compilation of 12 signed etchings adapted from drawings Riopelle did on the theme of the circus over a four-month period in 1989. Completing the album—75 copies of which will go on sale for $12,500 each—are six circus-related poems written by Quebec singer-poet Gilles Vigneault. The work, says Vigneault, is the culmination of a 30-year friendship that began in Paris when he sang one of his poems for the artist. “Jean-Paul had tears in his eyes,” Vigneault, 72, recalled in a Maclean’s interview last week. “He swore that one day we had to do something together. This is it.” Montreal art historian François-Marc Gagnon, who wrote the introduction to the new album, calls it “nice, interesting work that fits very well with what Riopelle has been doing the last few years. It’s his style, his way, his world.”

Some art experts are not so sure. Questioning the extent of an ill Riopelle’s participation in the privately funded project, they wonder if the highly technical etchings, done by a professional printer, make Le Cirque more of a commercial venture that relies on Riopelle’s name than a genuine work of art. “I’m sure [Le Cirque] is beautifully done, but I don’t think it will add anything to Riopelle’s career,” says Simon Blais, a Montreal art gallery owner who specializes in post-1945 Canadian abstracts. Although Riopelle declined to be interviewed, friends and associates maintain that he did indeed control the etching project, which was carried out in a workshop next to his seven-bedroom seigneurial manor on Ile-aux-Grues in the summer. “Jean-Paul worked with us on almost a daily basis,” says album co-publisher Michel Tétreault who, together with the printer, spent much of the summer at Riopelle’s home. “In fact, this project seemed to be the only thing that really excited him.”

Whatever the extent of Riopelle’s involvement in Le Cirque, the work is likely to rekindle interest in both his career and his bohemian, often tormented personal life. Born in Montreal on Oct. 7, 1923, he had a childhood marked by solitude, boredom and a domineering mother whom he referred to as “the police.” According to a recent French-language biography by Montreal writer Hélène de Billy, Riopelle’s constant attempts to defy and undermine his mother’s authority helped to forge the rebellious character that would later become his stockin-trade.

In 1936, Riopelle met art tutor Henri Bisson, the first of several influential people in his life. Bisson introduced Riopelle to two central elements in his life: oil painting and nature. Riopelle continued to paint as a hobby after he joined Montreal’s Ecole du Meuble (a furniture design school) in order to gain student status and avoid conscription in 1943. Balking at the repressive culture of the time, the restless young artist began to experiment with his art, playing with shadows and depths and turning objects around until they became unrecognizable.

It was at the Ecole du Meuble that Riopelle met teacher and painter Paul-Emile Borduas, who idolized Van Gogh and Matisse. Under the guidance of Borduas, Riopelle and a handful of other young Quebec artists worked exclusively in abstraction. Because of the spontaneous, unconscious style they developed during daylong artistic jam sessions, the “groupe Borduas” soon became known as “les automatistes.” Recalls Marcelle Ferron, a still-active artist and one of two female members of the group: “It was all very avant-gardiste, very powerful socially. We were seen as revolutionaries.”

In 1946, Riopelle married Françoise Lespérance, the mother of his two daughters and, according to de Billy, the first of many women in his life. The couple moved to Paris in 1948, joining the thriving postwar artistic community in the French capital. The vagabondish, James Dean-like Riopelle met and befriended many 20th-century creative giants, including French writer André Breton. Known as the “pope” of the surrealist movement, Breton baptized Riopelle as “un trappeur supérieur” (a superior trapper) whose youthful but savage automatiste style—then unknown in Europe—seemed both a product and a reflection of the rugged Canadian wilderness. During this period, Riopelle and his fellow automatistes drafted the seminal Refus global, a manifesto proclaiming artistic freedom and denouncing Christian society.

In the early 1950s, Riopelle painted in feverish marathons in his small Paris studio, producing what most experts consider to be his greatest works, a series of huge abstracts called “Mosaïques.” When he signed

with the prestigious Pierre Matisse gallery in 1954, he instantly became Canada’s most famous painter—at the age of 31. “He’s been in the big leagues ever since,” says Gagnon, who has written an upcoming book on the automatiste movement. “While most Canadians are more familiar with the Group of Seven, only Riopelle—and now, maybe, Michael Snow—enjoys such a colossal international reputation.”

Flush with fame and money from the sale

of his paintings in the finest art galleries of New York City and Paris—and on his own after Françoise left him, because of his numerous affairs, and returned to Montreal with the children—Riopelle indulged in a wild existence. His life was frantic with intensive bouts of painting, fast cars and allnight parties. He also entered into a turbulent, sometimes violent, 24-year relationship with the late American painter Joan Mitchell—“Riopelle’s alter ego,” says de Billy. That lifestyle continued well after Riopelle’s star faded in the 1960s due to the rise of American pop artists such as Andy

Warhol. “I’ve never met or heard of anyone who has lived life like Jean-Paul,” says the beefy Charest, who acquired his first Riopelle painting in 1968 by beating the painter in an arm-wrestling match while they were lying on a Paris street following a night of drinking. “He was always on the go; he never slept. He has lived three lives at 200 miles per hour.”

An increasingly lonely Riopelle decided to return to Canada in 1972. “He missed his culture, hockey, hunting and fishing,” recalls Vigneault. From the luxurious, part-time studio-residence he built in the Laurentian Mountains north of Montreal (he continued to shuttle between Paris and New York until he settled permanently on Ile-auxGrues in 1993), Riopelle became an avid outdoorsman and returned to using nature—owls and snow geese in particular—as subjects for figurative paintings, lithographs and ceramics. Diagnosed with osteoporosis in the mid-1980s—a period when he became the first Canadian artist to have a painting sell for more than $1 million—Riopelle was forced to work sitting down and switched to mixed-media techniques involving spray paints, markers, stencils and metallic paints. Most of these graffiti-like works—including the 30-frame, 130-foot-long Homage to Rosa Luxembourg that Riopelle completed in 1992, his last work before Le Cirque—were panned by critics who considered them “aberrations” in his career.

While admitting that Le Cirque's collectibility will never rival that of Riopelle’s best-known pieces from the 1950s and ’60s, Gagnon argues that the new album is nonetheless an important work. “Artists continue to evolve throughout their lives and work around the social, financial and physical limitations that are imposed on them at every stage. That is exactly what Jean-Paul Riopelle has done and, hopefully,

will continue doing.” At present, however, that seems unlikely. Now requiring the help of three people—his companion of 10 years, Huguette Vachon, 47, and two full-time attendants—Riopelle rarely leaves the sparsely inhabited Isle-aux-Grues. Still, Vachon, who arranges regular visits from Riopelle’s old friends, insists that “Jean-Paul isn’t sick, he’s tired,” and that “on his good days” he is still intellectually vigorous, with a lively sense of humor and gusto for life. It remains to be seen whether Jean-Paul Riopelle will ever again be able to channel that vigor into art. □ 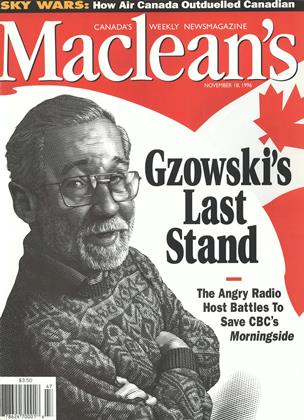