Toy shopping for many parents this Christmas is war—Beast Wars, to be precise. With the retail season shaping up to be one of the best so far this decade, even some people who hit the stores early have returned home disappointed, unable to find some of the most coveted items on their children’s wish lists. By last week, at least half a dozen must-have toys, including Hasbro Inc.’s Baby Go Bye Bye doll and Mattel Inc.’s Barbie Fashion Designer CD-ROM, were sold out in Canada and on back order.

Nothing is hotter in the $900-million Canadian toy market this year than Hasbro’s Beast Wars Transformers, a collection of animal figures based on the made-in-Canada kids’ show Beasties. “They’re noisy, bright-colored and fast-paced—everything boys 6 to 11 love,” says Donna Piasentini, communications manager for Hasbro Canada Inc. of Longueuil, Que.

Some toy sellers compare this year’s scramble to the 1983

Cabbage Patch Kids craze, the difference being that this time the brisk demand is not limited to one product. Tickle Me Elmo, a furry red version of the Sesame Street character, was in plentiful supply six weeks ago. But after more than a month of television ads and free plugs by Elmo fans on the U.S. TV talk-show circuit, the plush doll is now virtually extinct in toy stores across Canada. “We had hundreds of them three weeks ago,” reports Christina Lee, a sales representative with Toys “R” Us in Surrey, B.C. “We’re now sold out."

So what is a desperate parent to do? “I’d recommend that you get something else,” said one Wal-Mart clerk in Toronto. “Or pray we get a miracle and another toy shipment from China.” For some parents, the battle has just begun. 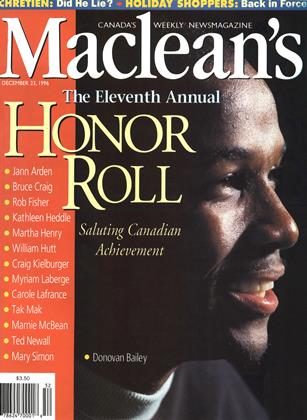