It had, at least, the veneer of upscale normality. On Dec. 19, Brian Mulroney and his family closed up their Forden Crescent home in the exclusive Montreal enclave of Westmount and slipped away for a secluded two-week holiday at a rented chalet in the Laurentians. So much for the illusion. For one thing, there was the accompanying RCMP bodyguard, a publicly funded precaution afforded past prime ministers, if they wish, who are judged by police to be under possible threat. Almost four years after leaving office, Canada’s 18th prime minister, covered around the clock at home and abroad, still qualifies. And then there was the rather odd choice of destination—and the reason for it. For winter holidays, the Mulroney clan traditionally gravitates south, not north, to the glamor of private Palm Beach oceanfront homes and upscale Florida golf resorts. But this year, with a $50-million libel suit pending against Ottawa over the Airbus affair, Mulroney remained close to home. “Brian is staying put in Canada,” said a Montreal friend, “and he won’t budge for at least three months.” Three months is how long Mulroney figures it will take the Quebec Superior Court in Montreal to grant him personal and political redemption. Well aware that federal defence lawyers will seek to deny him any measure of bittersweet revenge, Mulroney has cleared his private agenda—in his ongoing effort to clear his name of allegations that he accepted bribes. Gone, for the moment, are the far-flung business interests of corporate directorships that whisk the workaholic around the world; the speaking engagements once a month that earn him as much as $45,000 a pop, plus expenses; the endless hobnobbing with high-rolling friends and associates in a lifestyle so lavish that it raises even discreet Westmount eyebrows. Prepared for battle, the 57-year-old former prime minister has come a long way from the days when, according to friends, he was so distraught that he shut himself away for weeks after the Airbus story broke on Nov. 18,1995. “I saw the man,” recalled one confidante, “crying like a baby.” Despondency has since stiffened into resolve. “He’s just like he was in the 1988 election campaign,” said another friend. ‘When things get hot, he turns cold; he’s not afraid of anything. He’s going to fight hard.”

For a streetwise politician from BaieComeau with a knack for courting controversy, Mulroney in post-political life has

detached himself from daily Canadian affairs with apparent ease. There he was, before Airbus, in February, 1995, tanned and beaming in a Palm Beach Post photo with wife Mila and his host, local megamillionaire Al Taubman, who celebrated his 70th birthday with “an intimate” mélange of 350 friends. Among them were Gordon and Ann Getty, Betsy Bloomingdale, the Aga Khan and designer Oscar de la Renta—all serenaded al fresco by a 35-member orchestra flown in from Paris. Last January, two months after Airbus, Mulroney had sufficiently recovered from his despondency to address the Society of the Four Arts in Florida, a last-minute substitute for Watergate journalist Bob Woodward, snowed in back in Washington. And there again were the Mulroneys, as guests on a 10-day cruise of the Mediterranean by private yacht last July; on a hunting trip

with “business associates” at a country home outside Madrid in late November; at an opera gala at Place des Arts in Montreal in early December with Paul Desmarais Jr. of Power Corp.

In fact, outside Canada at least, Mulroney’s troubles have garnered him a certain panache, an aura of roguish recklessness. “It’s a bit of a messy interruption, isn’t it?” sighed an employee of the Washington Speakers Bureau, agents for Mulroney, former British prime minister Margaret Thatcher and former U.S. president George Bush. But old loyalties endure. Before Airbus, Bush publicly called Mulroney, his fishing buddy and fellow world leader, “a good friend.” After Airbus—at the opening last September of a $250-million Nevada gold mine owned by Barrick Gold Corp.—

Bush, still a fishing buddy but now a fellow member of the Barrick board, declared Mulroney “my great, good friend.”

At home, the Mulroneys are the objects of curiosity—and

at times envy. Neighbors appraised the estimated $700,000 worth of renovations and the sumptuous furnishings carted into the twostorey stone house, bought in April, 1993, for $837,500. ‘The windows were top of the line, not even the kind that a regular $ 10-million millionaire would buy,” said one neighbor. “We’re talking about big bucks.” Next year, only one of the Mulroney’s four children, 11-year-old Nicolas, will be at home.

Daughter Caroline, a Harvard honors graduate, is an analyst for a Wall Street merchant bank; Ben is in his final year at Duke University in Durham, N.C.; in early December, Mark wrote his entrance exams to Boston College.

While no one will say how much Mulroney earns, the style of the close-knit family is obvious. Mila, “thin as a rake and gorgeous” at the Mount Royal Tennis Club, turning heads “in a very smart tennis dress,” according to another member; Mulroney and his youngest son Nicolas, a budding hockey star in Verdun, sitting in the reds of the Molson Centre; Brian and Mila, the honorary director of the national Cystic Fibrosis Foundation, at an awards dinner at the Quebec chapter last spring at which Mulroney announced, at evening’s end, a personal donation of $25,000.

The obvious pleasure Mulroney gleans from his rarefied social circle belies how hard he works to play. “If he’s on a board, he not only attends but carves himself an eminent role,” said Tory Senator Michel Cogger, a longtime friend and, along with former appointments secretary Senator Maijory LeBreton, one of the few Ottawa contacts Mulroney has maintained. The corporate boards Mulroney chose after leaving politics are as high profile as they are powerful: Power Corp. put him on its international advisory board; Peter Munk made him chairman of the international advisory board of Toronto-based Barrick. As

a board member, Mulroney also opens doors for Petrofina SA, the Belgian multinational conglomerate, as well as the Chase Manhattan Bank in New York, and troubleshoots for Archer-DanielsMidland Corp., the Decatur, 111., corn and soybean giant that, on Mulroney’s advice, reached an agreement with the U.S. justice department last October on price-fixing. In fact, some analysts credit Mulroney with extracting Archer-Daniels-Midland, which paid a fine of $100 million, from an intractable mess.

Redefining frequent flyer, Mulroney en route lugs a briefcase crammed with a cellular phone, an ancient radio with a dial (his kids bought him a digital shortwave radio but he couldn’t figure out how to use it); three reading books; three pairs of glasses and business papers. But is the man who spent the better part of his life mapping his course to Ottawa now content to watch politics pass him by? Friends say Mulroney gloats over Jean Chré_ tien’s GST woes, takes pride in = the success of free trade and sometimes rants about his failure to unify the country. “But he really has stepped away from the political scene,” said LeBreton. “He’ll call and ask what’s going on, and I’ll say, You don’t really want to know.’ There’s just so much more for him out there.” 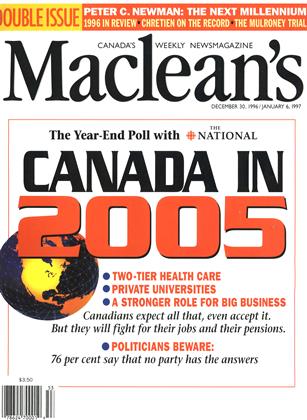