When you ask a consummate cultural bureaucrat to come up with a plan to save the world, you can be sure the plan will make the world safer for cultural bureaucrats. Welcome back, then, Pierre Juneau, who has just co-authored a report on the future of the CBC, Telefilm Canada and the National Film Board. Juneau began the serious work of destroying the CBC in 1985 in order to save his own skin. As then-president of the CBC, he was ordered to make huge cuts in the CBC budget by the Tory government. His choice was to cut the creative people: directors, producers, set designers, film editors and the like. They are the meat and Juneau was the fat—the top-heavy management and bureaucracy. Fat, of course, can’t be expected to cut fat.

In a better world, no one in their right mind would have let Juneau near public broadcasting ever again. Fortunately, this time there were two other people on his team including Peter Herrndorf, with whom I worked at the CBC many years ago. Herrndorf was an imaginative and enthusiastic television producer, committed to better current affairs programming, and flawed in only one significant way: he had an insane need for early morning meetings. Now, he heads TVO whose programming has improved immensely under his leadership.

Public broadcasting is of genuine value. A country must look after the health of both its body and its mind. But artistic excellence in broadcasting may mean living with smaller audiences, hence the need for state subsidies. A country that neglects its spirit loses the will to survive, just as in a concentration camp the truly strong are those who have the mental stamina to go on, not simply youth or physical strength.

Canada’s public communications industries lost their way some time ago. Two elements contributed to this: first, they tried to copy the commercial film and television

world. The CBC could not match the budgets and ratings of Roseanne or Seinfeld and, if this was to be the yardstick of their success, then they were bound to fail. Second, much of public broadcasting was captured by silly politically correct special-interest groups—such as the Women’s Studio D unit of the NFB.

When documentary drama and the art of film is captured by politically correct groups, there is an artistic problem, no matter what the ideological premise: real art cannot be shoehorned into an ideological construct. The censors of either feminism or family values are the enemies of art. The public may not realize what is happening, but bad art will alienate the public simply because it is bad. In addition, a CBC that was home to left-liberal ideas only ultimately alienates or loses credibility with large segments of the population. My favorite example of this attitude was the CBC’s refusal to accept a 1979 Insurance Bureau of Canada commercial called “Let’s Free Enterprise” on the grounds, as the CBC bureaucrat wrote, that “free enterprise is a controversial topic in our society.” By now, that free-enterprise society is so fed up with the CBC that any attempt

to raise taxes for it is met with hostility.

But this is wrong. The CBC is a great national institution. There are people of real talent and tremendous dedication still there in radio and hanging on by their fingernails in TV news and current affairs, drama and daytime programming. We have to give the CBC back to the programmers, not to Juneau’s army of mandarins, human resources staff, sexual harassment educators and the like. Nor should we monitor the CBC for political fairness. By getting the most talented people, we must just let them do their best programming: all the rest is housekeeping.

The solution to the future of the CBC, the NFB and Telefilm Canada has nothing to do with debates on whether or not they sell commercials—let them—or the precise way in which public money is raised. The real question is whether or not public broadcasting is going to be set up either to foster the highest achievements of our culture or whether it is there simply to serve as an outlet for cultural bureaucrats and for the politically correct pressure groups.

If it is set up to serve the latter purpose, then we will have a string of little fiefdoms across Canada, each with its equity officers and commissars. Instead, the CBC needs to concentrate on news gathering, information and cultural programming, and the documentaries and dramas that could become the Canadian alternative to commercial television. If there is good theatre in Halifax, it can come to CBC studios in Toronto. We don’t need a CBC version of the transfer and equalization payments that have nearly bankrupted this land.

Telefilm Canada ought to revert to its original mandate: namely, it should become a bank that mainly gives matching funds to Canadian film-makers with a proven track record. Let’s end the useless process of civil servants, who either have no background in film-making or have failed at it, deciding what films should be made. A small portion of funds could be set aside for first-time filmmakers to get a chance.

The NFB should be totally scrapped. While it has done some very fine work and Canadians excel in the documentary genre, we don’t need two government organizations to look after that. A branch of Telefilm Canada could be set aside to allow the best documentary makers access to funding, and the CBC could be required to set aside a portion of its programming for their output.

The fragmentation of the communications market is a further argument for an infusion of funds into the arts. New arts specialty channels are picking off the CBC’s natural viewers. Every civilized country in the world recognizes that cultural excellence needs subsidizing. And what is Canada without its own culture? Nothing but a huge inert mass waiting for the spirit to give it a pulse beat and life. We really mustn’t fail our artists because of mistakes of the past or because of fears about the future. We are all stewards of our public broadcasters and now is the time to come to their aid. 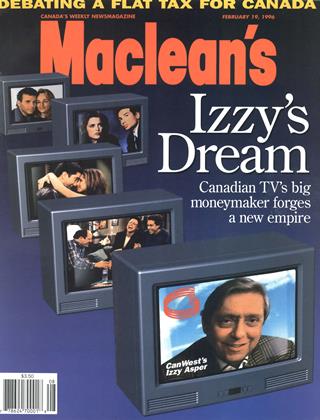