John Edward Cleghorn, who will preside over his first annual meeting of the Royal Bank of Canada in Montreal on March 6, is very different from the plumed birds that customarily occupy the gilded cages of Canada’s most influential corporate chairmanships. He takes nothing for granted.

Unlike most bank chairmen, who believe that it takes only one person, themselves, to change a light bulb—simply hold it still while the world spins around them—Cleghorn rejects any pretence of being an imperial, all-knowing presence. He is obsessively interested in the private truths that underlie the social and economic pressures that bedevil his job.

Cleghorn admits that the public perception of Canadian banks seems set in concrete: that the banks are too damn big and much too powerful; that they make huge profits and pay minimum taxes; that they shortchange small business and charge their customers extravagant service fees, and that they’re pushing their way into insurance and car leasing to expand already bloated bottom lines. Except for the last item, which has to do with persuading Ottawa’s regulators to allow the banks to enter one of the few financial service sectors they don’t already dominate, Cleghorn categorically rejects all of the other accusations.

spot last January, he talked to me recently about the many issues troubling him and his industry.

“While we’re the largest Canadian bank, in the past quarter century we’ve dropped from second to sixth in North America while our

He points out that the world’s largest bank, formed recently through the merger of the Mitsubishi Bank and the Bank of Tokyo, is more than six times the size of the Royal and boasts more assets than the entire Canadian banking industry. Even such smaller trading nations as Holland and Switzerland have larger banking units than Canada.

world ranking has gone from 12th to 59th.” That banks are too large and too powerful may be self-evident in the Canadian context, but Cleghorn contends that globally his bank (with assets of $184 billion and 10 million customers) is far too small. If Canada’s Big Five banks were merged, he says, they would control only 56 per cent of the country’s deposits, less than half the outstanding mortgages, and almost a quarter of the mutual funds. “Under status quo conditions,” he maintains, “Canadian banks are likely to get smaller in relation to foreign entities, and I can foresee a gradual erosion of the ability of our banks to compete. To be effective internationally, you’ve got to be dominant at home—otherwise, you can’t play in this global game.” control less than half of Canada’s total financial sector. ‘With an anti-monopoly fervor born of rugged individualism, the United States ended up with local monopolies that penalized small business and depositors,” Cleghorn says. “Canada, with a much greater historical emphasis on order and stability, ended up with a much more competitive banking system—though that advantage is now being lost as U.S. deregulation proceeds and the American system moves in the direction of Canadian-style national banking.”

Cleghorn believes there has to be more, not less consolidation in financial services. He harks back to the 1950s and the last merger wave of Canadian banks (with the Imperial and Commerce combining, as^vell as the Toronto and Dominion) and thinks it should happen again. “There certainly have to be some more mergers of financial services,” he insists.

Cleghorn maintains that Canadian bank profits are not exorbitant when compared to those of the big U.S. banks—the Royal made a net income of $1.2 billion last year on assets of $184 billion. He says the U.S. banks charge a much higher spread—the difference in interest rates between deposits and loans—thus fattening their bottom lines. “If people feel that they’re being gouged in terms of the fees we charge,” he says, “then we haven’t done a good enough job explaining the fact that banking fees are one of the very few areas where Canadian consumers get a better deal than Americans.” It’s a significant difference because banks have really become more feethan asset-based. Some 36 per cent of the Royal’s revenues come from various business or consumer service fees.

Cleghorn’s big push in Ottawa this year will be to seek approval to allow the banks to sell their insurance products in their branches. “Let the customers decide who they want to buy insurance from,” he says. ‘We’re permitted to buy insurance companies, but the efficiency comes from using the branches to sell policies.” The Royal already collects $300 million in premiums and ranks 12th among Canada’s life insurance companies—and that was before the purchase, due to close next month, of Westbury Canadian Life Insurance Co.

Cleghorn feels disappointed with bank critics, including a few MPs, who say that the banks aren’t doing enough to help small business. But he acknowledges that, “Banks must explain a lot better what they’re doing for smalland medium-sized knowledgebased industries. In fact, we’ve just announced a $300-million lending fund especially for small business, and we’re experimenting with different techniques to provide faster turnaround time for loans or equity applications.”

Persuading Canadians that the banks are first-class citizens will take some doing. The nasty stereotypes are strongly held and widely believed, but John Cleghorn is determined to alter these perceptions and restore the banks’ untarnished credibility. He may just be the man to do it. 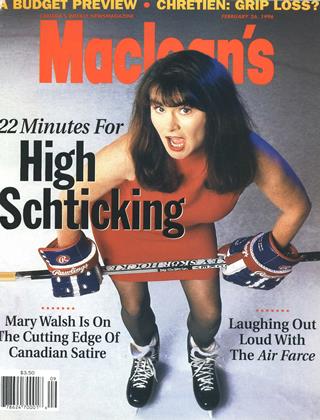