A rusty freighter, controlled by extremists willing to inflict mass slaughter to publicize their cause, steams towards New York City. Hidden beneath tons of scrap metal in its hold, almost undetectable to radioactivity sensors, is a fist-sized ball of plutonium. That shiny sphere, called a “pit” in the jargon of nuclear weaponry, is the core of a former Soviet warhead. With only a few thousand dollars’ worth of readily available electronics gear, the machine-tooled metal has sprung back to life as a crude but effective nuclear device. Does Manhattan suffer a devastating holocaust? Or do authorities intercept the rogue vessel and prevent—for the moment—a disastrous episode of nuclear terrorism?

It may sound like a page torn from pulp fiction. It is instead a calm—if frightening—assessment of the possible by some U.S. officials in Moscow. They are government specialists on temporary assignment in Russia as part of a $1.8-billion program that Washington is funding to ensure that the two former adversaries reduce their nuclear arsenals under lockstep agreements spelled out in the 1992 Strategic Arms Reduction Treaty (START-1). But the American representatives at ground level in Moscow say that time may be running out on their efforts to bring the old Soviet empire’s “loose nukes” under £ control. As key world leaders convene in I Moscow this week for a summit on nuclear I safety and security, many experts believe I that the threat of nuclear weapons or mateI rials falling into the hands of terrorists or

outlaw nations has never been greater.

During the past year, bombing attacks have spread death and destruction in Oklahoma City in the U.S. heartland and Israel’s Tel Aviv. Algerian Muslim extremists have detonated bombs in Paris and the Irish Republican Army ended an 18-month ceasefire with a massive explosion in London. Yet horrific as those attacks were, authorities know the casualties could have been much worse. Today, for terrorists willing to kill on a mega-scale, such tools of annihilation as 25,000 former Soviet warheads, huge stockpiles of weapons-grade plutonium and uranium and even highly poisonous nuclear waste are temptingly available at hundreds of poorly guarded sites in Russia and other former Soviet republics. “Right now,” says Leonard Spector, director of the nuclear nonproliferation project at the Washington-

based Carnegie Endowment, “there is a race against the clock to get the mass of nuclear material in Russia secured before it lands in the hands of terrorists or rogue states.”

Although such concerns have been expressed ever since the Soviet Union collapsed in 1991, intelligence experts now view the problem as urgent. Maclean’s has learned that the U.S. Central Intelligence Agency discovered last September that enough highly enriched uranium to make a nuclear weapon had been stolen from a military base near Moscow. With limited co-operation from the Russians, an intense investigation was launched. In the process, the CIA found that a number of gyroscopes were also missing from a ballistic missile that had just been dismantled. Military gyroscopes are at the core of a missile’s guidance system and their sale is severely restricted. Large sums of money were paid to informants throughout the former Soviet Union, Europe and the Middle East. By late October, the CIA learned that the missing gyroscopes were being stored in a shed at Amman airport in Jordan, waiting for transshipment to Iraq. Jordan’s King Hussein was informed, and the missile parts were seized and publicly handed over to the UN in November. No trace has been found of the stolen uranium—which may still be in Russia. CIA chief John Deutch recently told a Senate subcommittee that there had been no verified case of the smuggling of sufficient nuclear material to make a bomb.

But since the Jordan incident, it has emerged that other gyroscopes from Russian missiles have slipped through the net and were delivered to a major missile research laboratory outside Baghdad known as In al-Haytham. The smugglers have not been caught. “Someone in Russia knew that the gyroscopes were not well protected and that person was able to contact the Iraqis and make a deal,” says Spector. “Very likely, there are other pipelines in place to other rogue countries

or terrorist groups. And if gyroscopes can pass along a pipeline, so can weapons-grade materials.”

Earlier this year, a classified CIA report on the danger of loose nukes from the former Soviet Union was delivered to President Bill Clinton. As a result, says Spector, a classified “special order” has been issued to the Pentagon and the intelligence agencies making the situation America’s “number 1 security priority.” The order remains secret for fear that publicity could trigger a backlash in Russia and cause political problems for President Boris Yeltsin. But CIA chief Deutch told the Senate subcommittee that the prospect of nuclear diversion from Russia is “a major national security threat” for the United States. A source close to the National Security Council told Maclean’s that Clinton is “acutely aware” of the loose nukes problem, but that he is also aware of Russian political sensitivities. The source added: “No one in the White House underestimates the danger.”

Prime Minister Jean Chrétien and other leaders of the Group of Seven industrialized countries are meeting in Moscow on April 18 and 19 to discuss nuclear safety and security. They already have one stark reminder of the old Soviet empire’s capacity for disaster, as the conference coincides with the 10th anniversary of the world’s worst nuclear accident—the April, 1986, explosion of a Soviet-era reactor at Ukraine’s Chernobyl power station. But the discussions about warhead security and ways to ensure the safety of Soviet-era atomic reactors will take place in a swirl of conflicting agendas. Ukrainian President Leonid Kuchma will be in Moscow, trying again to get cash-strapped Western representatives to release a promised aid package of $3.1 billion in loans and guarantees. In return, Kuchma will again pledge to follow through on a much-promised shutdown of the three remaining reactors at Chernobyl. The conference will also serve as a backdrop for a giant photo opportunity: the G-7’s first formal assembly in Moscow is a tacit endorsement of Yeltsin’s bid to hold off a strong Communist challenge in the scheduled June 16 presidential election. According to a Canadian official who helped organize the conference, Russian representatives at last year’s G-7 meeting in Halifax hit on the idea of a nuclear summit in Moscow. Their reasoning: despite lingering embarrassment over Chernobyl, such a major event in the Russian capital would advance their campaign to expand the industrialized-nations club to the G-8.

But the Russians bring bruised national pride and serious suspicion of Western motives to the table, even as they accept such technological aid as computerized systems designed to improve accountability at their nuclear stockpiles. They acknowledge that thefts and attempted thefts of nuclear materials have risen dramatically. Still, Russian officials continue to insist that most burglaries are committed by amateurs who steal radioactive material from nonmilitary sites—ranging from medical institutes to nuclear plants—in the illusory hope of making big profits. Security around

Gagarinski and other members of Russia’s nuclear establishment question German intelligence reports that there have been more than 800 attempts to smuggle nuclear material out of Russia and other former Soviet republics since 1991. One of the most sensational cases—the 1994 arrest of three former Soviet citizens in Munich—cast at least as bright a light on police zealousness as it did on the clandestine nuclear trade. In that incident, three men flew from Moscow to Munich with a lead-lined suitcase containing 363 grams of plutonium to meet prospective buyers who had offered a total of $350 million for the four kilograms needed to make a crude bomb. But there, and in at least four other seizures trumpeted by the Bonn government, the buyers turned out to be police agents working elaborate sting operations. To Russian officials, such tactics are designed to embarrass Moscow and pressure it to make its nuclear programs more amenable to the United States and its Western allies. Says Georgi Kahurov, a spokesman for Minatom, the vast, secretive organization that oversees Russia’s nuclear programs: ‘We will never agree to Russia’s nuclear potential and weapons being controlled by the United States.”

Despite such strains, co-operation on reducing the nuclear threat continues. But Western concern has grown even as Moscow has dismantled about 2,000 warheads yearly and scrapped long-range bombers and missiles to meet the requirements of START-1. According to U.S. government estimates,

Russia is adding those decommissioned warheads to 1,500 tons of plutonium and highly enriched uranium already stored at hundreds of different sites—enough nuclear material for 100,000 atomic weapons. Work has barely begun on what Russian scientists refer to as the “Plutonium Palace,” a high-tech warhead storage site in central Russia.

Last month, a Harvard University study concluded that the United States faces a greater threat of a nuclear explosion today than during the Cold War because of poor nuclear security in the former Soviet Union. Graham Allison, a former assistant defence secretary and co-author of the report, told Maclean’s he was recentiy shown photographs by the U.S. department of energy of 38 buildings in Moscow where highly enriched uranium is stored. The buildings are surrounded by “a modest chain-link fence with holes in it,” some doors are unlocked and the uranium is kept in the sort of lockers found in North American high schools. “A determined group could get the stuff,” Allison says. He also

cites the case of a Russian naval officer in Murmansk who crawled through a hole in the fence surrounding a submarine fuel facility. He entered a building that was unlocked, broke into a locker, hacked off a 10-lb. chunk of enriched uranium and hid it in his garage. He was looking for a buyer when he was caught Allison believes the West should buy all of the weapons-grade uranium that the Russians will sell and dilute it to make fuel for civilian nuclear reactors. He estimates that would cost about $13 billion. In a similar vein, a G-7 proposal calls for Canada’s CANDU reactors to use U.S. and Russian plutonium reprocessed into fuel pellets. But Allison still expects to see cases of terrorists getting nuclear material and threatening to use it. “And I sometimes think it will take such an incident to awaken us from our denial, our sleepwalking, and make us get serious.” As the G-7 leaders and their Russian hosts grapple with their terrible nuclear hangover, time is not on their side. 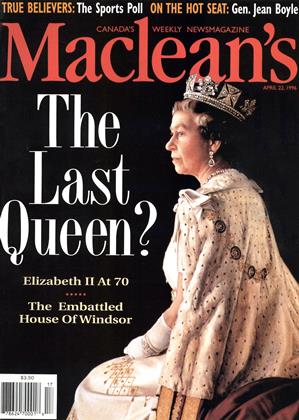