FAMILY TRUST LOOPHOLE Revenue Minister Jane Stewart says she will consider legislation to stop Canadians from moving assets offshore without paying capital gains taxes. Earlier, Auditor General Denis Desautels revealed that two large trusts controlled by a single family had, with the approval of senior Revenue Canada officials, transferred $2 billion in assets out of the country in 1985 and 1991 without paying tax. Desautels criticized the department’s decision but did not identify the family.

A federal agency is standing firm in its opposition to Greyhound Air, a proposed new discount airline that began advertising and selling seats to the public earlier this year. The National Transportation Agency has twice refused to license the airline on the grounds that it violates Canadian foreign ownership rules. Greyhound Lines of Canada Ltd. is 68 per cent controlled by U.S.-based Dial Corp.

Employees at a Wal-Mart Canada Inc. store in Windsor, Ont., voted 151 to 43 against joining a union. The decision followed a high-profile organizing drive by the United Steelworkers of America. Wal-Mart, based in Bentonville, Ark., has successfully fought to keep unions out of its stores since the company’s founding in 1962.

The pace of job creation in Canada increased in April even though the unemployment rate rose to 9.4 per cent from 9.3 per cent in March. The seemingly contradictory evidence is a result of what Statistics Canada calls “discouraged workers” returning to the job market in search of employment. The federal agency says that an estimated 40,000 jobs were created in April, compared with a monthly average of 34,000 since November.

A THREAT TO LEAVE

The head of one of the country’s largest corporations says it will move its head office out of Montreal if Quebecers vote to separate from Canada. BCE Inc. chairman Lynton (Red) Wilson told the company’s annual meeting that he now believes Quebec secession is unlikely. BCE controls Bell Canada, the country’s largest phone company, as well as Northern Telecom and a large real estate portfolio.

Wired into the banks

First, there was cash from a machine, then, bill payment by telephone. Now, consumers have the option of doing their banking by home computer. London, Ont.based Canada Trust Co. has become the first major financial institution in the country to provide personal-computer banking for its cus-

tomers. The company last week unveiled CTConnect, a software package that allows computer owners to dial in by modem and perform most of their normal banking activities: paying bills, transferring funds and writing cheques, but not withdrawing cash. The system also allows customers to obtain information about their investments, loans and mortgages, all of which will be automatically updated each time they connect with the service. Another feature allows account holders to send e-mail to bank staff. Most other banks are planning to introduce similar programs soon. Chuck Hounsell, vice-president of distribution development at Canada Trust, the is making

says company the move into PC banking to make it easier for customers to manage their money. “Since consumers’ lives are getting increasingly hectic and demanding, they are looking to technology to play a role in helping them,” he says. After a free three-month trial, the service will cost $7.95 a month.

TTmbarrassed Air Canada ofl_/ficials have cancelled a European advertising campaign that featured an Indian chief standing next to a white businessman in a first-class airline seat. Under the headline “Sitting Comfortabull?” the magazine ad claimed that “business chiefs get more

moccasin room on Air Canada’s Executive First than any other airline in Canada.” The advertisement, created for the airline by a London-based agency, brought an angry response from Ovide Mercredi, national chief of the Assembly of First Nations. “This ad campaign is denigrating,”

Mercredi complained. “It also reinforces the racist stereotype that Indians are lazy.” Air Canada officials apologized for the advertisement, acknowledging that it was “inappropriate.”

Opening up the skies

Two Canadian companies are going headto-head in a battle for the country’s four vacant “parking spots” for direct-broadcast satellites. Edmonton-based Shaw Communications Inc. says it will spend as much as $800 million to launch two such satellites if it receives approval from the federal government. “We fully support the Canadian government’s policy of fostering dynamic competition,” said president Jim Shaw Jr., noting

Ottawa’s declared willingness to end Telesat Canada’s monopoly over satellite broadcasting. Telesat Canada, however, says it has already signed a $1.5-billion deal with Telecommunications Inc. of Denver to launch two new satellites later this year. Telesat is also vying for the two remaining slots by asking Ottawa to approve a deal with U.S.-based TelQuest Ventures. Telesat lost 50 per cent of the capacity of one of its Anik E-l satellites earlier this year. Under rules established by the Geneva-based International Telecommunications Union, Canada is entitled to a total of six orbital positions for direct-broadcast satellites. 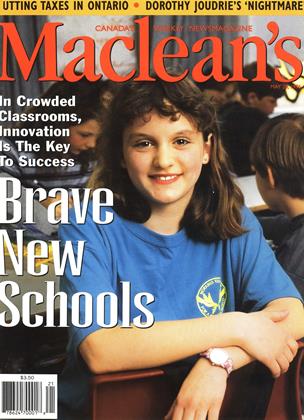