Mark Blumes is feeling absolutely naked. “I gotta have a cigar,” he says. Particularly if he is going to be photographed. So one is provided. As he repeatedly sucks and relights, he conversationally caroms across his painful ouster from Mark’s Work Wear-house Ltd., the coveralls-to-construction-boots company he built with his bare hands, to his strained familial relationships, to the creation of Mark’s Virtual Store Inc., his latest retail creation.

Which happens to be in cyberspace. There has been a fair bit of psychotherapy along the way. “I keep waiting for him to tell me not to come back,” says Blumes of his own client-therapist relationship. “He doesn’t say that. He says, ‘See you next week.’ ”

risks, and of how it feels to pay the price of failure. Just last fall, Blumes was battling the board of Calgary-based Mark’s Work Wearhouse, which he founded in 1977.

Blumes, who credits himself with pulling the company

from the brink of bankruptcy in the ’91 recession, wanted to take MWW into the world of electronic commerce. The board showed him the door.

Garth Mitchell, who took over as chief executive officer after Blumes’s ouster, says that e-com was not the major reason for the falling out. He talks obliquely about the difference between founding skills and operational skills. He will say that e-com appears to have merit, but less so in a business such as MWW, where “size, try-on and color” still rule consumer decision-making. “Virtual stores, in terms of apparel and footwear items, still have virtual sales,” he says. ‘We wanted to devote most of our attention to having great stores.” Blumes was hurt. He was broken. He cried. They gave him a plaque. Now, he has bounced back, and he is looking for retail revenge.

To look at Blumes today is to see little change in the dishevelled, overweight, ashen poster boy for either the anti-smoking or anti-cholesterol coalition.

But he says he has changed. “What I’ve been through I wouldn’t wish on a dog in terms of the pain associated with being terminated from a child you created and all that kind of stuff,” he says. The old Mark—the one who reached into the safe that first business day in 1977 so he could buy a brandnew Oldsmobile Cutlass Cruiser to impress the inlaws—is no more. “I’m a damn good merchant,” he says. “But I’m not crazy. And I’m not bizarre.”

Mark’s Club, are the corporate personification of the new Mark Blumes. He describes MVSI as a “Price Costco, Sportchek, Home Depot store all combined in cyberspace.” This is not exactly a new thought wave. But Blumes believes that e-com will revolutionize the consumer-retailer relationship.

And so he is plotting a matrix of merchants for cus-

Kicked out of his own firm, Mark Blumes plans a high-tech retail comeback

tomers and manufacturers to access through MVSI, “a practical, down-to-earth conduit to this mystical thing called the Internet.” For Canadian retailers at large, e-com is still mystical, the revenues still small. But Blumes does not think in market-share terms. He will, he says, create in cyberspace an environment where a customer’s expectations are consistently exceeded. Then, he says, they will become “customers for life.”

Blumes is 52. But he says he thinks like an 11-year-old. Which is good, in his view. “Eleven-year-olds consider what there is to gain,” he says, as opposed to what there is to lose. “And they don’t know ‘can’t.’ ” Blumes is trying to master a more youthful lingo from his earlier retailing days. It could use a little polish. “This Cybernet, er, cyberspace, Internet and all this e-com, is pretty ethereal,” he says. There is, however, something refreshing in Blumes’s

perceptions: “When you slice right though it, it’s just another communications strategy. What I bring to the party is I’m a down-

home country merchant. It doesn’t matter what the medium is. What matters is you move the product.” Blumes has never been one to

think small. “I think I have the potential and the possibility to change the face of retailing in this country,” he says. According to the terms of his departure from Mark’s Work Wearhouse, Blumes is excluded from entering the clothing business for the next two years. He was paid a $900,000 severance package. But there is a further $300,000 to be paid over two years, which Blumes will forfeit if he breaks his non-competition promise. The way he tells it, Mark’s Virtual Store will offer just about everything but clothing—from hockey sticks, to, one day, financial services. He says he will seek a listing on the Alberta Stock Exchange within a year. He says MVSI will be up and running in Alberta in the fall, then move to Atlantic Canada. He says he will have 640,000 customers by year 4. “This,” he says, “is not minor.”

It is, however, lacking a few specifics.

Last week, Blumes met with Geoff Pickering, chairman of Calgary-based Xentel Interactive Inc. Pickering says Xentel is about to sign on with MVSI as a technology provider through its Magellan Interactive Media division. Magellan’s specialty is electronic cataloguing for the likes of J. C. Penney and Land’s End.

Xentel offers the virtual shopping look, as well as seamless “connectivity,” a word much-favored by e-com practitioners. What Blumes badly wants from Xentel is a commitment to take an ownership position in MVSI. He estimates start-up capital at a surprisingly modest $1 million, tops. He needs minority investors. “I’m going to have 52 per cent of this or I ain’t doin’ it,” he says. “I had less than 50 per cent of something else and it caused something to happen that was rather unpleasant.” Pickering is psychically aligned with the MVSI idea.

Retail, he says, is “rapidly moving towards the concept of a seamless market-

place that doesn’t involve human intervention.” And he has positive things to say about Blumes: “I see Mark as a maverick retailer. I think we need mavericks in times of change.” But Xentel has yet to put any money on the table.

Pickering will, however, take the possibility of an equity stake in MVSI to the Xentel board. He says he sees MVSI as something akin to CUC International Inc., the Stamford, Conn., company that has been in the e-com trade for 17 years. Last fall, CUC launched Shoppers Advantage on the Internet, allowing consumers to graze through more than 250,000 product offerings. Members, who now total more than 200,000, pay an annual $65 fee. Products range from televisions (400 offerings) to power drills (193). Some members order product through Shoppers. Others use it simply as an

Around the world, an estimated 100,000 /^retailers retailers have have already already set set up up shop shop on on the Internet. Sales to date have been disappointing: according to one study, each site pulls in an average of $4,000 annually. But a recent report by Forrester Research Inc., a U.S. consulting group, concluded that the popularity of on-line shopping and other forms of electronic commerce will increase rapidly between now and the year 2000.

information source, to increase their bargaining muscle with local merchants.

Blumes believes his ability to bond with manufacturers will give him the advantage in setting up MVSI. Others, including St. Remy Multimedia, a virtual shopping mall being set up by Quebecor Multimedia Inc. and Cogeco Cable Inc., have a head start. Philippe Lecoq, marketing manager for St. Remy, says the service will be launched in 400 homes and 200 businesses in June. “Most retailers are seriously looking into e-com,” he says. “But they don’t know how to go about it.” Blumes suggests that any competition lacks his relationships with, and “bonedeep belief in,” Canadian consumers. There are other motivations. “I tried poverty and it sucks,” he says, “so I want to try wealth again.” He will not say how much start-up capital he is pulling from his own pocket for Mark’s Virtual Store.

It was Mark’s Work Wearhouse that made him rich the first time. The same agreement that precludes him from trading in workwear for two years does not preclude a takeover attempt. He certainly intends to get back into the jeans business. “How that occurs and when that occurs will be related to the opportunity that presents itself [in MVSI].” He grows almost pensive. “One of the things I’ve learned....” The thought drifts away. Then he gets a new idea. “It is,” he says, “the carpe diem kind of thing.” Blumes’s take on seizing the day is to put in the same punishing, life-shortening schedule that killed his marriage two years before his divorce from Mark’s Work Wearhouse. “It’s lonely,” he says. “Oh, excuse me, I’m alone, which is a circumstance.” There’s the therapy thing again. But Blumes is not the type to seek corporate or personal closure. He is, instead, plotting his autobiography. Of course it has a title: Wherever I Am I Want to Be Where I’m, Not. □ 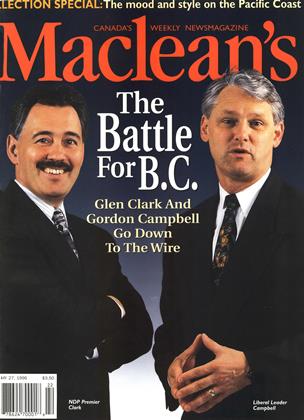