It was vintage Donald Cameron. Last week, the former Conservative premier of Nova Scotia spoke of his integrity and strength of character before launching into a bout of finger-pointing. His onetime Liberal opposition, officials in his own government, Ottawa bureaucrats, even the dead miners themselves—he said these were the ones responsible for the disaster at the Westray coal mine in Plymouth, N.S., four years ago, which left 26 miners dead and helped drive his government into political oblivion. Rambling on before the inquiry, which he, as premier, had called into the disaster, he lashed out at the media and the inquiry itself for trying to link his ardent promotion of the project to the tragedy. Then, when the proceedings broke for lunch, Cameron, now Canada’s consul general in Boston, sprinted down a hallway, giddily taunting reporters with the words “what a bunch of fools,” as he climbed into a waiting car.

Day 66 of the Westray inquiry was supposed to provide a flash of insight. Instead, it was simply bizarre. “We’ve heard over and over again that safety starts at the top, the proper approach begins at the top, mind-sets begin at the top, quality begins at the top,” inquiry lawyer John Merrick dryly pointed out to reporters after grilling Cameron. ‘We’re seeing the top.” It was not a pretty sight.

Cameron’s testimony was no different than that of any of the other bureaucrats and politicians who have sat in the witness chair and refused to shoulder any blame for the explosion that ripped through the Westray mine on May 9, 1992, eight months after it opened. But if Cameron felt like the accused, he had good reason.

As what Merrick called “the swirl of politics” cleared, the former premier’s pivotal role in the Westray drama seemed unmistakable.

The testimony so far makes the disaster almost sound inevitable. Since the inquiry began last Nov. 6, outside experts and miners have told grim tales of safety violations, poor ventilation, high levels of methane gas and coal dust, and mine managers who intimidated staff and even tampered with safety equipment in an effort to pull more coal out of Pictou County’s infamous Foord seam. The testimony has been a litany of pathetic detail: a senior supervisor said he hid coal dust to dupe safety inspectors; a company geologist said Westray’s crumbling, gassy underground formations were so unstable that disaster was unavoidable; an electrical engineer testified that the mine manager ordered him not to install air-monitoring equipment in the area where the explosion eventually occurred.

Who should have been protecting the miners while their safety was being comj mised? To that searing question, the consistent answer from the parade of nesses seems to be: Anyone but me. F Scotia’s chief mine inspector, All McLean, denied seeing safety violati in the mine. He also maintained tha had no responsibility for safety at

ifiery between his monthly inspections. Throughout his two m of testimony, the province’s former director of mine safety, »ude White, insisted inspectors had not overlooked dangerous Yitions in Westray. And when Patrick Phelan, executive direcícf minerals and energy for the province, took the stand, he disced the provincial natural resources department from any 'íe—instead pointing towards the governments in Ottawa and ;fax, which anted up $106 million in loans, loan guarantees and

Politics, it has become clear, gave the project life. Earlier, Harry Rogers, a former deputy minister of the federal department of industry, science and technology, testified there was wide opposition within his department to federal financial support for the mine on economic grounds. But the naysayers were overpowered by shrewd, aggressive lobbying efforts by three job-hungry Nova Scotia politicians of the day; then-premier John Buchanan, provincial industry minister Cameron and federal cabinet minister Elmer MacKay, whose Central Nova constituency contained the proposed mine site.

Last week, the trio finally took the witness stand in Stellarton, N.S., within sight of the Westray mine’s silos. The performances were remarkably diverse, both in style and substance. MacKay dismissed allegations that the mine received federal loan guarantees and subsidies as a payoff for his having given up his safe Tory seat so that Brian Mulroney could run in a byelection in August, 1983, shortly after becoming federal Conservative leader. “This is a crock,” he testified. “I never pressured him. You don’t pressure prime ministers.”

MacKay said he acted simply as an “advocate” of the project, who felt it was good for the province and his constituency. The big champion of the mine, he said, was Cameron, the MLA from the area when Curragh Inc. of Toronto was seeking funding for the project. MacKay told the inquiry his provincial counterpart seemed to lose his objectivity towards the project, even though he never stepped over the bounds of appropriate political behavior. “He [Cameron] pursued it with considerable vigor,” explained MacKay. “He wanted it very badly and he was impatient, very impatient.”

Cameron himself, while sorrowful about the disaster, was clearly testy on the witness stand. He flailed at Merrick for trying to imply he gave Curragh a sweetheart loan package and overzealously lobbied federal officials to come through with an $85-milg lion loan guarantee. He accused his Liberal political opponents of I trying to “milk every ounce of political benefit they could from S the death of 26 human beings,” and called the media biased § against him. When asked whether he as premier was ultimately I responsible for the catastrophe, he disagreed, saying he did not I know labor department officials were failing to do their jobs. Ini stead, he pointed to federal civil servants who scrutinized the project for more than a year before approving funding for the project in June, 1990» The delay, he argued, forced Westray to rush into production to satisfy its contract obligations to provide coal to Nova Scotia Power Corp., the provincial electrical utility. That resulted in the company altering its plans and miners entering the gassy, coal-rich southwest section of the mine where it is believed a spark from a piece of mining equipment ignited explosive levels of methane gas.

He was, though, just warming up. Ultimately, Cameron said, the

blame lay with the men working the mine—a reference to earlier testimony from miners who said that some of their coworkers tampered with methane monitors and failed to cover an opening in a wall designed to prevent methane from leaking from an abandoned section of the mine.

“The bottom line is that the mine blew up that morning because of what was going on in there at that time.”

Family members of the dead miners had already stormed out of the hearing room when Cameron blamed their dead brothers, sons and husbands for their own deaths. After 65 days of traumatizing testimony, his comments were too much for some. “I thank God my children are too young to read the papers, because my husband didn’t cause that explosion, neither did his co-workers,” Genesta Halloran, whose husband, John, died in the tragedy, said fighting back tears.

But there were other critics still to come. Buchanan, an avuncular Tory from Sydney, was premier from 1978 through 1990 before a series of embarrassing scandals forced him to resign and take a Senate seat provided by Mulroney. He never did see eye-to-eye with Cameron, a stern former dairy farmer, who took over as premier in 1991, holding the post until his election defeat in 1993. Last week, the contrast became even clearer. “Responsibility within depart-

Cameron 'wanted it very badly and he was very impatient'

ments goes up the line,” Buchanan testified, refuting Cameron’s view on how the chain of command operates. “The ultimate responsibility for government is the premier.”

More damaging, though, were hints that Cameron may have overstepped his bounds as provincial industry minister during negotiations with Curragh over the financing package for the mine. Buchanan said the Nova Scotia cabinet had not approved a $12-million loan to Curragh when Cameron signed a letter stating it would be granted in September, 1988. He said Cameron again acted without cabinet approval when he signed a letter, against staff advice, committing the province to buy up to 300,000 tons of Westray coal annually if the company could not sell it elsewhere.

For his part, Cameron had testified that he had cabinet go-ahead in both cases— and that he had assurances from Curragh that the government would never be asked to buy the coal. Again, Buchanan had a different opinion. “It would be a strange government,” he said, “who would sign something and not intend to honor it.” If there is one thing the inquiry—which resumes on June 10 when more government witnesses

and some Curragh officials take the stand—has made undeniably clear, it is that, until its tragic conclusion, the Westray project was a perfect example of how the politics of job creation operate in Nova Scotia. Once, the politicians lined up to take credit for it. Now, nobody wants to take the blame. 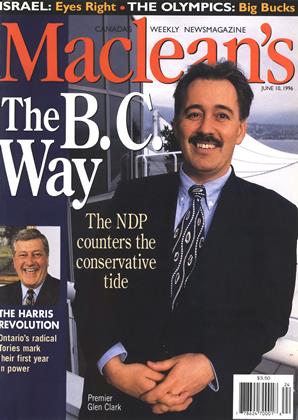