Politics in Israel is usually conducted at a shout. Four days after Binyamin (Bibi) Netanyahu squeezed his way past Shimon Peres to become Israel’s new prime minister, hundreds of his Likud party followers gathered in a

Jerusalem convention centre to pay thunderous homage to the man who brought them back to power. They sang patriotic songs as loudly as they

could. They bounced up and down on their seats and hollered their gratitude to God for Netanyahu. Above all, they screamed their hatred for the vanquished Peres. To the supporters in this raucous hall, Israel’s very existence had been preserved by defeating Peres, a man they believe has a congenital desire to trade lands steeped in Jewish history and regained with this generation’s blood for a questionable peace with the Palestinians. Said Chaim Stanger, a sweat-soaked Tel Aviv lawyer pumping the air for Bibi: “In Israel, politics comes from your belly, not your mind. That’s why Peres failed—in their belly, most Israelis, even on the left, still hate the Arabs.”

The end of the election campaign is obviously not about to cool Israel’s fever. There was some predictable revisionism by Washington and Israel’s Arab partners that Netanyahu’s victory was not quite the case of gloom-and-doom for Mideast peace it had been cracked up to be during the campaign. Yes, he would be a tougher nego-

tiator than Peres. But is the 46-year-old, American-bred, image-sensitive Netanyahu really prepared to go down in history as a peace-wrecker? His views are not as hardline as they seem, said Jordan’s King Hussein with an optimism that infected many

So a conventional wisdom took hold in the days after the vote that Bibi was not as bad as his bark, as if what Ne-

tanyahu was saying did not matter. “Never say never,” Jeremy Hanley, Britain’s minister of state for the Middle East, warned Netanyahu in a speech in Cairo last week. But over and over, Netanyahu did just that, restating his campaign pledges as policy: he would never offer the Palestinians their own state, as Peres and the Labour Party had promised to do. He would never divide, nor even discuss, Jerusalem, Israel’s “eternal capital.” He would never put the Golan Heights on the table in any negotiation with Syria. Young Palestinians certainly heard Netanyahu clearly. They scrabbled for stones in the West Bank city of Hebron, hurling them at Israeli troops as they did during the six-year uprising known as the intifadeh.

The world will soon find out if Netanyahu means all he says:

•Under terms of the Oslo peace agreement, Israeli troops are already behind schedule to vacate Hebron, the site of the Tomb of the Patriarchs, which is steeped in

symbolism for both Muslims and Jews. Netanyahu must decide whether to complete the pullout or listen to powerful hardliners in his government such as onetime defence minister Ariel Sharon, who helped deliver the orthodox Jewish vote to Netanyahu. Sharon wants the troops to stay to protect Hebron’s Jewish minority.

•The red, green, black and white Palestinian flag still sagged in the hot breeze over the headquarters of the Palestinian Authority in East Jerusalem. But Netanyahu considers its presence a violation of the Oslo accord, which does not give the Palestinians a political voice in Jerusalem. He has vowed to close it.

•Netanyahu’s choices for cabinet will indicate just how hard line he plans to be. Again, most observers were watching to see how he handled Sharon. For the man who conducted Israel’s ill-fated 1982 war in Lebanon, the defence portfolio would appear to be a non-starter. But others believe Sharon will have clout no matter what post Netanyahu offers. “Even if he is minister of environment, he’ll get a few settlers to put up a settlement and call it an environmental monitoring station,” said a sardonic Joseph Alpher, director of the Jerusalem office of the American Jewish Committee.

Making peace, of course, is a duet. Yasser Arafat must also stick to the letter of

Oslo or risk having the process stall. Netanyahu will demand that the Palestinian Authority hand over suspected terrorists.

He will likely not allow Arafat to fudge his commitment to remove calls for the destruction of Israel from the Palestinian covenant (it is now being rewritten). Following Netanyahu’s victory, Arafat sought solace at a mini-summit with Arab neigh-

'There is a personal chemistry' between Netanyahu and Clinton

bors in the Jordanian seaport of Aqaba. “Sooner or later, there will be a Palestinian state with Jerusalem as its capital,” he said.

Whatever optimism prevailed last week seemed to rest on Washington’s perceived ability to cajole and compel Israeli policy, no matter who is prime minister. “Israel is the daughter of America,” said one Palestinian man in explaining the Palestinian consensus on why it mattered little to them who governs Israel. The Jewish state is heavily dependent on $5.5 billion in annual American aid, more than Washington gives any other country. As Yoram Ettinger, a Likud parliamentarian who has been touted as a possible ambassador to Washington,

Certainly, Netanyahu’s years spent in U.S. universities and as Israel’s UN ambassador have made him comfortable in American politics. Zalman Shoval, ambassador to Washington under the last Likud government, said that Netanyahu and U.S. President Bill Clinton first met during the 1992 New Hampshire primary. “People will be surprised to find that there is a personal chemistry which goes back to that initial meeting,” said Shoval. He added that when the two men met in Jerusalem last March, Clinton told Netanyahu: ‘We are not going to tell Israel how to achieve peace.”

But in Washington last week, state department spokesman Nicholas Burns was doing just that. “Our policies have not changed,” he said. We still support landfor-peace.” That opens the question of whether Netanyahu, like past Likud leaders, can afford to flout American pressure, a brand of Israeli isolationism that plays well in parts of Israel. The past four years of Labour policies matched those in Washington—“a striking exception,” noted Ettinger. “Now we are back to the traditional policies which are not the same as those of the United States.” All of which should make for clashes ahead, at high volume.

With SHARON MOSHAVI in Jerusalem 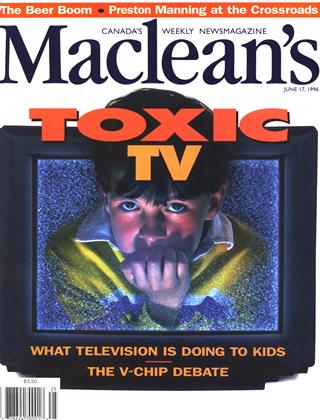