The coffee and doughnuts were free, the staff was friendly and the balloons gave a festive look to the recent open house at the Canada

Employment Centre for Students in Toronto’s east end. But they did little to lift the spirits of York University students Peter Dolphin and Jeremy Coombs. Dolphin, 24, a fourth-year mass communications and English major, started sending résumés to television stations in February. He had hoped to snag a “career-related job” for the summer, but now he is willing to take anything. In the previous four weeks, Coombs, 20, had faxed 40 résumés to potential employers, and he was starting to worry that he might spend the summer of 1996 without a job. The second-year health sciences major had reason to be afraid: last summer’s student unemployment rate hit a dismal 15.9 per cent, up from 9.4 per cent in 1989. Meanwhile, both Coombs and Dolphin are bracing for a whopping increase in the price of tuition: this September, fees will shoot up 20 per cent in Ontario to roughly $3,000, and by as much as nine per cent in other provinces. “I have about $15,000 in loans now and I will have to take another loan in September,” says Dolphin. “It’s scary.”

general employment, students across the country are discovering that the fine art of financial survival is one of the most critical lessons to be learned on the way to a degree. In the past decade, average undergraduate tuition has more than doubled at Canadian universities. And although two provinces—British Columbia and Quebec—have frozen fees for the coming school year, university administra-

tors in both insist that they will continue to pressure their governments to give them the green light for future increases. Last month, officials at the University of British Columbia in Vancouver attempted to raise $3 million through what it called “special fees,” with a purpose to increase student aid and to improve teaching facilities. The government immediately vetoed the plan. “If you wish to maintain the quality of the

LURING THE BEST AND BRIGHTEST

As universities win the right to charge more for tuition, they are also vying to lure the best and brightest students

with generous new scholarships. One beneficiary of that competitive atmosphere is 17-year-old Veena Sologar of Red Deer, Alta., who learned in a recent telephone call from University of Alberta president Rod Fraser that she won a $25,000 four-year scholarship to study engineering this fall — part of a new $550,000 package of entrance scholarships being awarded by the Edmonton university. Sologar, who has a 99.4-per-cent average, turned down scholarships that were roughly half as generous from both the University of Toronto and Harvard University. “I'm happy and relieved,” says Sologar. “Without this scholar-

ship, I would have had to borrow from my parents, work through school and still take student loans.”

Alberta is not the only university courting the country’s most accomplished students. Queen's University in Kingston, Ont., which now offers nine prestigious Chancellor Scholarships, worth $24,000 over four years, will be upping that number to 40 next year. “The very best students get a lot of offers and we want to ensure that we don’t attract second tier,” says Queen’s principal William Leggett. Other universities are beginning to offer a range of more modest awards. Starting this fall, Dalhousie University in Halifax will give $1,000 to first-year students with an

university system, you have to increase tuition,” says Bernard Shapiro, principal of McGill University in Montreal. “Freezing it is what you do when you want to ensure mediocrity.”

That attitude has many students worried. In the 1994-1995 school year, the most recent for which figures are available, Canadian university and college students collectively borrowed roughly $2.5 billion to finance their educations—more than double the amount of five years earlier. Asks Alex Usher, the national director of the Canadian Alliance of Student Associations: “How much do we expect students to go into debt to pay for a degree? This system is dividing the rich from the poor even further.”

To help calm such fears, many govern-

ments and universities have been scrambling to introduce a patchwork of assistance programs. Ontario is requiring all universities to devote 10 per cent of this year’s tuition fee increase to student aid. As a result, the University of Western Ontario in London, for example, will plow $1.2 million into an existing workstudy program to provide 1,000 new part-time campus jobs.

In Newfoundland, the Student Work and Service Program is offering students $50 a week to work at a charitable or nonprofit organization of their choice this summer. If students complete eight full weeks of work, they will also receive a $1,200 tuition voucher redeemable anywhere in Canada. British Columbia now awards high-school students one point for every year their grades reach the top 30 per cent of their class. Upon graduation, they can exchange their points for up to $800 in tuition vouchers.

Still, many observers say there is a press-

ing need to rethink student aid on a much broader level—and to address the thorny issue of how graduates will repay what are threatening to become staggering debtloads. Critics maintain that current government loan plans make it difficult for many needy students to obtain help, and contain onerous and unrealistic conditions of repayment. Only two years ago, it appeared that a controversial scheme known as Income Contingent Repayment (ICR) was on the verge of being adopted when the federal government suggested it as part of proposed changes to the Canada Student Loans Program. Such a plan would make loans available to all students, regardless of family income. In turn, the pace of repayment would be linked to a graduate’s in-

come, calculated as a part of income tax. Many student groups complained that such a scheme would inevitably become an excuse to shift even more of the cost of postsecondary education onto the backs of their members.

Although talk of such a plan died down amid doubts on the part of several provinces, many of whom expressed concern about the logistics of implementing such a program, the Ontario government of Premier Mike Harris has now put it squarely back on the agenda. Minister of Education John Snobelen told Maclean’s that he has discussed the issue with his federal counterparts three times since taking office one year ago, and says that he wants a harmonized plan that involves ICR “up and running” by September, 1998. So far, the federal government has not made any official commitment, but the pressure

to appease Ontario will be intense. Fully 57 per cent of all Canada Student Loans go to Ontario students—a figure that Gerry Godsoe, policy chief at the Canada Student Loans Program, says is “obviously a consideration” in current discussions about ICR at the federal level.

That spectre has many students fearing the worst. They insist that the entire thrust towards significantly higher tuition—and easier borrowing—is wrongheaded and dishonest. “A government that has declared debt bad and said that there is no money in the coffers is turning around and legislating tens of thousands of Canadians into long-term debt,” says Brad Lavigne, chairman of the Canadian Federation of Students. “It’s a bit hypocritical.”

Lavigne and other critics of ICR can take some comfort in the fact that, for all its influence, Ontario remains the only province that appears

ato be backing such a plan. In fact, Alberta and New Brunswick have explicitly rejected the notion. Predicting that large student debts will lead to high levels of default, Fred Hemingway, chief executive officer of the

Alberta Students Finance Board, which administers the student aid program in Alberta, says that the scheme “is not fiscally responsible in the long term.”

Still, as the cost of postsecondary education continues to climb, students such as Coombs are bracing for a future that will include significant debt. Facing three years of undergraduate studies and two of teachers’ college, Coombs estimates that he will have to borrow at least $20,000 to finance his education. “I hate the idea of having loans,” says Coombs. “I don’t like owing money to my parents or the bank.” That may be. But at a time when universities are as cash-strapped as their students, learning to borrow—and borrowing to learn—are fast becoming requirements of graduation.

average entering grade of 90 per cent or higher. At Ontario’s University of Windsor, new students with at least 80 per cent will receive a $1,000 reduction in the cost of residence.

Not all new initiatives are generated by the universities themselves. This week, the privately funded Cambridge Canadian Trust will announce four new scholarships, sending two undergraduates and two graduate students to Cambridge University in England. The first winners, to be awarded $90,000 over three years, will be announced in December.

from Governor General Roméo LeBlanc in a ceremony at Government House in Ottawa. Each won four years tuition, a $3,500 annual stipend and a guarantee of summer employment at Canada Trust—worth $40,000 over four years. One recipient, Jason Walker, 18, of Victoria, has volunteered thousands of hours at a local hospital, the municipal government and St. John Ambulance. Although Walker says that he undertook such work for “the emotional rewards," the scholarship means that he can stop worrying about how to pay for his education—and devote his attention to deciding among the University of Victoria, Montreal’s McGill University and McMaster University in Hamilton as places to pursue his dream of becoming a doctor. For Sologar and Walker, the ball is in their court. 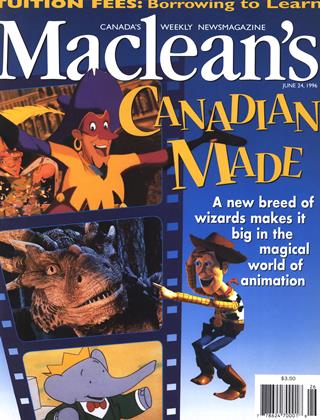