Making music for the love of it

Quebec City pop group Soul Attorneys have come a long way since just a year ago, when

they were playing music and writing songs in one of their living rooms just for the fun of it. Last week, Sony Music released their eponymously titled debut CD. Topping that, they are in the midst of a 15-city North American tour opening for Canadian pop diva Céline Dion. The band members—lead singer Jacques Gaines, keyboardist Eric Filto and guitarist Mathieu Dandurand—got together after quitting other bands. But things turned around when they signed on with manager Sebastien Nasra, whom

they call “the fourth attorney” and who is well connected in the Quebec music scene. “Now, we’re opening for Céline and our songs are on the radio,” says Gaines. “But the best part of this whole adventure is that we are still making music for the love of it—we’re just doing it out in public now.”

For Canadian supermodel Linda Evangelista, it is common to see her face everywhere from TV ads to magazine covers to billboards. But until now, the St. Catharines, Ont., native has not been a political party symbol—and that’s the way she intends to keep it. Last month, the National Front, an extreme-right French political group led by the controversial Jean-Marie Le Pen, used a painted image of the model dressed as Joan of Arc to advertise a political rally. An outraged Evangelista, her modelling agency, Elite, and designer Karl Lagerfeld, who took the photograph used to make the painting, took the Front to court. Banning the group from using Evangelista’s image, the French court awarded her $21,000 in compensation. Now, the trio has launched a civil suit against the National Front for an unspecified amount in damages. A spokesman for Elite in Paris says that while Evangelista does have philosophical objections to the party, the main reason for suing was the use of her image without permission. He added: “That is the basic right of a model.”

A newcomer's deluge of offers

Canadian author Susie Moloney will not finish writing her new novel until September, and it will probably be a full year after that before it reaches bookstores. But already her unfinished manuscript about a drought-stricken North Dakota town that turns to a rainmaker for relief has become the talk of Tinseltown.

That is because Paramount

Moloney’s A Dry Spell for more than $650,000. A bidding war for the publication rights soon followed, with Delacorte in the United States and Canada’s Doubleday winning with bids that have not been made public. Moloney, 34, who lives on Manitoulin Island in Northern Ontario and writes a humor column for four local papers, is taking her sudden success in stride. She has been compared to everyone from fright-meister Stephen King to humorist Dave Barry. “All I want to

know,” she ponders,“is when some guy is going to be called ‘the male Susie Moloney.’ ” It could be sooner than she thinks.

A family man on the job

Canadian actor Matt Craven has landed some juicy parts in Hollywood, including Lt. Dave Spradling in 1992’s A Few Good Men and seaman Lt. Roy Zimmer in last summer’s Crimson Tide. So when Craven, 39, auditioned for the weekly TV cop show High In-

Steven Spielberg, wanted to understand why he was switching from feature films.

Says Craven, who is married and has two young children: “I said I wanted to be home more for my family, and he told me that was an excellent

reason.” Being part of a large ensemble cast means that Craven, who grew up in Thorold, Ont., works just three days a week on the TV show, which ABC has picked up for a second season. Lately, Craven's character, officer Len Gayer, has been coming to terms with the on-duty death of his partner, but has neglected his family. “He’s just starting to realize that he has to go home and deal with his wife," says Craven. A little close to home, perhaps? 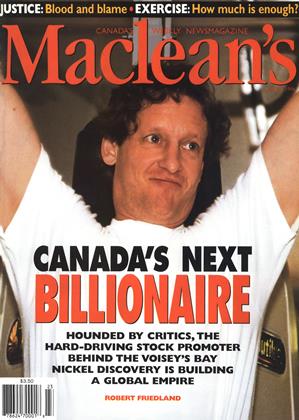