Long before Paul Martin was first elected to the House of Commons in 1988, he was active in a variety of volunteer activities that ranged from fund-raising for disabled groups to membership in the human rights organization Amnesty International. So when he became finance minister in November, 1993, it was only natural, says Martin, that he pushed cabinet colleagues and bureaucrats “to make damn sure they facilitate the work of community groups.” One of his first acts was to arrange federal funding for a pilot project to help find jobs for disabled people in Prince Edward Island that had stalled, awaiting government approval for more than two years. And in two of his past three budgets, he lowered the ceiling at which individuals could claim greater tax deductions from their charitable donations. But despite those efforts, Martin concedes, his desire to help volunteers runs headlong into what he calls “one unshakable reality.

The deficit affects everything that we do as a government.”

Ask not what your country can do for you, but rather what it is prepared to encourage you to do for others. In the cashstrapped 1990s, that is the new mantra of governments at all levels, as reductions in spending and services mean that they depend like never before on volunteers to do the work for free that governments once did routinely. “There is no question that governments have to rely on volunteerism more than ever in a time of cutbacks, and that makes it absolutely essential that we do all we can to recognize the importance of volunteers,” says Martin.

That desire manifests itself in a variety of ways. One of the most obvious is a formal recognition of the importance of Canada’s volunteers. That is evident in the new Caring Canadian Awards that Gov. Gen. Roméo LeBlanc will present to 12 recipients, one from each province and territory, on Canada Day. In March, Martin took part in a ceremony honoring “outstanding corporate citizens”— companies that work with community organizations to hire people suffering from disabilities. And there are the Canada Volunteer Awards, which Health Minister David Dingwall presented to 23 men and women with long records of service to their communities at a ceremony on June 18. Said Dingwall: “Governments have only woken up in recent years and started to acknowledge the significant contributions that volunteers make.”

But behind such ceremonies and cheery declarations lie sobering truths. Since the Liberals came to power in 1993, they have slashed spending virtually across the board to community and special-interest groups that have traditionally counted on federal funding. And over the next two years, they will cut about one-third of the $17 billion they give to the provinces in the form of annual transfer payments. That means, in turn, that the provinces will trim services and subsidies, as well as the money that they give to municipalities. Since many volunteer groups rely on money from all three levels of government, the effects can be devastating.

Still, many politicians argue that there continues to be a need to fund community organizations. Even in the Reform party, which supports deep cuts in government spending in almost all areas, some say the Liberals should think twice before cutting grants to community groups. Reform MP Keith Martin, a medical doctor who volunteers his services each summer at an emergency clinic in his riding on the southern tip of Vancouver Island, describes the present situation for volunteer groups as “a sorry state of affairs.” Adds Martin: “The cuts are coming too fast. Stability is needed to plan for the future.”

Directly or indirectly, those cuts affect almost all Canadians. One of the great dilemmas is that Canadian governments are cutting spending and support programs precisely at a time when many people need them more than ever. With the onset of new technology and an unemployment rate that has hovered around 10 per cent for most of the decade, an increasing number of Canadians are Ë confronted by career changes, unem! ployment and the insecurity that those ^ situations bring.

2 At the same time, the traditional relationship between government and the country’s citizens that economist Judith Maxwell calls “the social union”—the web of rights and obligations that the two sides share—is breaking down. In a recent report entitled “Building Blocks for Canada’s New Social Union,” Maxwell and her colleague Margaret Biggs suggest that the two sides need to jointly establish new definitions of their respective roles in society. That, in turn, suggests that individuals and groups take responsibility for some of the tasks previously performed by government.

Through the years, organizations catering to interest groups

and often disadvantaged segments of society have relied on a combination of public and private funds, and volunteer efforts. As a 1989 federal government study of volunteers noted, their activities encompass areas “beyond those traditionally understood by that term (including) activities undertaken without pay for unions, alumni associations and self-help groups.” As recently as 1993, the federal government spent an estimated $200 million a year funding interest groups. No precise figures are available on how much that figure has fallen since then, but federal officials acknowledge that across-the-board cuts have affected virtually all groups. Some of those, such as the National Action Committee on the Status of Women (NAC), have controversial and overtly political agendas that on occasion run contrary to the wishes and policies of the government. That has led to accusations from some NAC members that the cuts were politically motivated. But government cuts have also directly or indirectly affected nonpartisan causes that include refugee assistance groups, children’s aid societies, programs to help immigrants adapt to Canada, and charity groups with religious ties that help the impoverished.

In the lean and occasionally mean 1990s, the reality is that almost every facet of society depends at least in part on volunteer

efforts. At Ottawa’s city hall, few people who take the popular guided tours of the premises realize that the person leading them around is a volunteer. At one park in the city, Georges Langlois, a 75-year-old retired military officer, spends an hour and a half each morning cleaning the grounds—a labor of love. He phones the city’s recreation department every time repairs are required and it, in turn, provides them. Without him, the park would stay in disrepair because the city cannot afford a supervisor to oversee it. And in Montreal, when the city planned to cut funding at certain rinks three years ago, residents struck a deal; in exchange for maintaining the rinks, the city puts up the boards, freezes the ice and leaves material to maintain the rink. Volunteers now maintain 68 of the city’s 174 skating rinks. Those are jobs that used to be the responsibility of paid personnel.

At the other extreme, under Ontario’s ambitious and controversial workfare scheme, jobs that were once done by volunteers are now being handed to a new group: starting in September, 54,000 able-bodied welfare recipients will begin working for up to 17 hours a week as a condition of qualifying for benefits. Their jobs will range from cleaning parks to cutting grass, reading to the blind to assisting shut-ins. A similar program exists, on a much smaller scale, in Alberta.

Will volunteers, many of whom enrol in programs for pure enjoyment, derive the same satisfaction working beside those who are clearly unhappy at having been drafted to work? As workfare becomes more widespread, who will screen such workers to ensure that they are given appropriate work, and perform it properly? All those issues pose new problems for everyone involved, says Val Davis, a director of the Community Resources Centre in Kanata, Ont., which provides services and training to underprivileged ^ people. Says Davis: ‘We can’t I just send anybody out. There I are vulnerable people out § there. We have to do police I checks on our applicants. § How can the Ontario govern| ment provide safe service - without similar checks?”

Supporters of the plan, led by Ontario Community and Social Services Minister David Tsubouchi, argue that it will teach welfare recipients new skills and restore their sense of pride. But the program also raises questions that affect both those required to work and those they are supposed to serve. Will an elderly person or invalid feel comfortable knowing that the person attending to them is only there because they are required to be?

Workfare is one example of the increasing efforts of cashstrapped governments to maximize their resources. But, says Paul Martin, while that need cannot be ignored, governments must also take care not to lose sight of another fundamental notion. “Just as governments cannot operate without volunteer groups,” he says, “so we must remember that volunteers cannot and should not replace the government in many areas.” For both sides to function effectively, governments will have to remember to not just ask what volunteers can do instead of them—but also what they can do to help the volunteers. 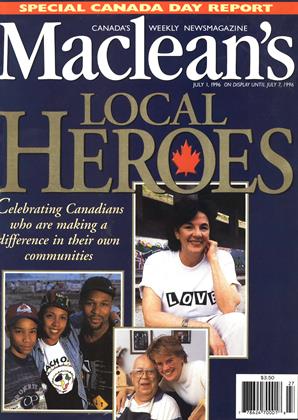