All Frank Mersch wanted to do was to trade a few shares in Newbridge Networks Corp. Well, 100,000 shares, which is a piddling amount in Mersch’s universe. Mersch’s firm, Toronto-based Altamira Management Ltd., buys and sells stocks and has $16 billion in “assets under management,” as the investment funds industry likes to say. So looking to pick up a small block of Newbridge would, as a rule, be no big deal. Except it was Tuesday. Last Tuesday. The day when North American stock markets put in their most vertiginous performance this year.

In any other week, Mersch’s concluding declaration—“it’s war in the capital markets”—might have seemed hyperbolic. But on the same Tuesday that the Dow Jones industrial average plummeted 167 points, it ended the day nine points ahead of its previous close, leaving chartists who monitor such movements staring at the graphic

equivalent of a meteoric crater. A phenomenal 680 million shares changed hands on the New York Stock Exchange. In the old days, the 1980s, the trading of 100 million shares would generate headlines. The Toronto Stock Exchange shuddered, then shook, then settled. ‘What we’ve got is a real battle going on,” says Mersch.

But between whom and over what? Even market boosters have been saying that U.S. stocks have been overvalued and were due for a correction. Any bit of bad news would do, and this time around, lower than expected earnings from high-technology companies presaged a bloodbath. NASDAQ, the New York exchange that is home to many high-tech flyers, started last week with its worst trading day since the crash of October, 1987. On Tuesday, the market completely lost its bearings as strong profit performances from the likes of the Caterpillar tractor people bolstered the mood of the optimists against the pessimism coming out of the technology sector. When Intel Corp., a mega-manufacturer of computer chips, which looms almost as large in the American tech psyche as Bill Gates’s Microsoft, released better than expected earnings after the close on Tuesday, the markets rose. When Netscape, the Internet software

Then there was the sombre, pale spectre of Alan Greenspan, chairman of the U.S. Federal Reserve Board. For months, market players have been nervous that the Fed would raise interest rates in order to chill inflation. Anxiety mounted in early July when employment figures showed surprising job growth. U.S. unemployment is a skinny 5.3 per cent, good news for labor, but inflationary if wages, and then prices, rise.

Twenty years ago, when Greenspan was the dour chairman of the President’s Council of Economic Advisers, the average American may not have had much interest in Greenspan’s power of analysis. They may not have paid attention when he announced in 1974 that the United States “was not about to get a dramatic decrease in economic activity” only to have to watch the U.S. economy fall off a recessionary cliff. But American household stockholdings now stand at $7.4 trillion; every month, another $34 billion goes into stock funds. There is some evidence to suggest that when markets falter, that dampens the confidence of consumers who invest for retirement Lower confidence means lower spending. Americans

now monitor every Greenspan twitch as closely as he observes their spending habits.

In his midyear presentation to Congress last week on the state of the U.S. economy, Greenspan, who has learned the value of circumspection, said he expected growth to moderate on its own. But, he added, the central bank was watchful of “incipient inflation pressures,” and would be ready to raise rates to keep those in check. With that, the U.S. markets, content that nothing bad was going to happen soon, moved ahead. All of which left nothing resolved. “Is there inflation? Is there no inflation?” asks Mersch. “Is the economy going to stay strong or is it going to roll over?”

What is known is that the American economy has been strong, far stronger than Canada’s. “In the U.S., the employment-to-population ratio is at its highest ever,” says Paul Summerville, director of research at Richardson Greenshields Ltd. “In Canada, it’s the lowest in 45 years.” The aftereffects of increasing corporate profits in 1994 and 1995 are being felt south of the border—wages are on the increase, consumers are spending big and housing prices in some major centres—Los Angeles, Phoenix, Chicago—are on the rise. Even though the Fed has been less aggressive on inflation than the Bank of Canada, there remains an expectation that modest U.S. rate increases are inevitable. “If you were to make a bet,” says Summerville, “you’d probably think the Fed will raise interest rates by the end of the summer.” The next Fed policy setting session is scheduled for Aug. 20.

into recession. Miles looks to other indicators, such as slumping car sales and rising initial jobless claims, to support his view. And he was not at all surprised by the stock market chaos. Miles has been forecasting that between the middle of 1996 and the middle of 1997, earnings of blue-chip corporations would decline as much as 30 per cent. “Clearly the analysts have been looking for trees to grow to the sky. Whether it’s 30 per cent or IIIIV1Q

a smaller decline, it’s going to catch them J IQOC

very much by surprise.” Miles does not x5JSJ©

predict a deep recession, nor a long one. Nine months, he says, similar to the 1990-1991 recession—which, by the way, Lehrman Bell Mueller called

correctly in 1988. Following Miles’s theory, Greenspan would move to cut interest rates in an attempt to keep the economy moving.

Even if Miles is right, what would troubles in the United States mean for the Canadian economy? Canadian unemployment is twice that of the United States, wages are stagnant, spending is flat, and consumers are staying home and heating up leftovers. The export-led recovery has yet to translate into an improved domestic economy, which explains why the Bank of Canada has kept interest rates low. On Friday, the

Bank of Canada rate fell a quarter of a point to 4.75. Chartered banks were expected to follow suit.

Which is exactly what Paul Summerville had been expecting. Summerville is bullish on the Canadian economy, and predicts that the fall in rates will be followed by an increase in private investment next year, prompting a rise in full-time employment in 1998. “It’s a very positive moment,” he says. The structural shifts—the cuts in public employment, the shift from consumption and debt towards exports and investment—have been dramatic but will, he says, pay off eventually.

In the meantime, many in the markets see shaky days ahead. “I’d be surprised if it were all over,” says John Embry, vicepresident, equities, with Royal Bank Investment Management in Toronto. “We still haven’t seen a 10-per-cent correction in the U.S. market in six years. I would be surprised if we didn’t get at least that if not more.” And Embry expresses some concern for the health of the U.S. economy. “I think the people that are looking for the Fed to tighten up rates may be looking in the rearview mirror,” he says. “We do believe the U.S. economy has receded in the recent past,” he says when presented with Miles’s views. “I wouldn’t go so far as to say they’re in a recession, but I can see where the guy’s coming from and I worry about that.” Canadian markets always get caught in the downdraft of American markets. “What you need to drive the Canadian market upward is for the world economy to accelerate,” says Embry. Renewed strength in Europe and Japan would be good for the commoditiesbased cyclical companies, the Incos and the Falconbridges.

Frank Mersch is counting on that. “I believe in an extended cycle,” he says. “Commodities will get firmer; the world is going to grow.” He sounds a bit beleaguered. “I’ve got a strategy and I’m living and dying by it” □ 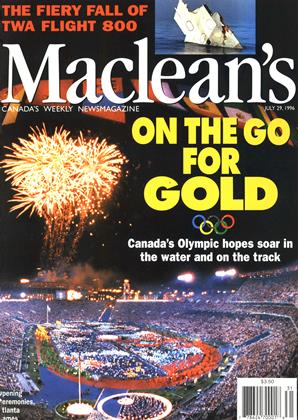