There were no shackles, no heavily armed guards. Instead, the man accused of attempting to murder the Prime Minister of Canada strolled into the Ontario provincial courthouse in Ottawa during his trial last week after being dropped off by a staff member of the supervised group home where he lives. Adding to the surrealism of the proceedings, André Dallaire, a slim and bespectacled 34year-old from Longueuil, Que., appeared anything but a coldblooded assassin as he circulated among reporters during breaks, freely granting interviews. He no longer hears voices, he said. He was sorry for the events that occurred last Nov. 5, when he entered the grounds of 24 Sussex Drive and broke into the Prime Minister’s residence armed with a three-inch-long knife. In the end, Justice Paul Bélanger concurred with the defence’s argument that Dallaire, diagnosed as a paranoid schizophrenic, had been delusional at the time of the break-in. The judge ruled that Dallaire was guilty of attempted murder, but that he could not be held criminally responsible for his actions—bringing to an end an all-toostrange episode in Canada’s recent political history. Said one Ottawa lawyer: “This thing has been bizarre right from Day 1.”

Few would disagree. At 2:10 am on Nov. 5, Dallaire arrived at the fence surrounding 24 Sussex Drive—and spent 20 minutes throwing stones onto the grounds and waving at security cameras that, ostensibly, were being monitored by Jean Chrétien’s RCMP security staff. He then climbed the fence and proceeded to the Chrétiens’ residence, where he smashed a window and entered the house. Dallaire wandered around in the basement and on the ground floor for another half-hour before going upstairs. Outside the Chrétiens’ bedroom, he was confronted by the Prime Minister’s wife, Aline, who quickly retreated into the bedroom, locked the door and telephoned for help—while Chrétien himself brandished an Inuit stone sculpture in case Dallaire broke through the door. Dallaire, later described by Aline Chrétien as resembling the Tom Hanks character in the 1994 movie Forrest Gump, put down his knife and waited for the RCMP to arrive—which they did, fully seven minutes later.

Last week, Dallaire, whose case will now be assessed by Ontario’s Criminal Code review board while he continues to live in a group home, expressed remorse for his actions, telling a throng of reporters that he wanted to say “sorry” to the Chrétiens. During the trial, Dallaire’s lawyer, John Hale, did not challenge RCMP evidence that, after he was finally apprehended, Dallaire had said that he wanted to slit Chrétien’s throat. But Hale argued that no such attempt had taken place—Dallaire, after all, had not entered the Chrétiens’ bedroom. “The accused must go beyond preparation and attempt to commit the ultimate act,” Hale said. Crown attorney Louise Dupont disagreed, telling Bélanger that Dallaire’s “intention to kill was always present.” And, she added, “at no time in the night did he change his intention.”

That purpose, though, was clearly the product of a severely troubléd mind. Defence witness Dominique Bourget, a psychiatrist at the Royal Ottawa Hospital, told the court that Dallaire was suffering from delusions last November, and that he heard voices telling him to kill Chrétien. Bourget said that the convenience store worker, diagnosed as a paranoid schizophrenic when he was 16, fancied himself to be a secret agent whose mission was to avenge the No side’s victory in last October’s Quebec referendum on independence. Bourget also said that Dallaire is no longer a threat to the public. After the events of last November, he received a 60-day psychiatric evaluation, overseen by Bourget, at the Royal Ottawa Hospital, and was subsequently released to an Ottawa-area group home in January after doctors testified that his condition had improved since he was put on medication. In addition, Dallaire’s movements were not restricted, as long as he was accompanied by a group home staff member. He was escorted to and from the courthouse each day by a staff member.

“All the acts of Mr. Dallaire following his entry on the grounds are stages in the act of attempted murder. The intention to kill was always present At no time in the night did he change his intention.”

“He was taking things one step at a time to see how far he would get He was receiving instructions from an inner voice while another voice told him to stop—it was like he was in a dream.”

“How many assassins would wave at security cameras for 20 minutes in order to see if they might get caught?”

‘The voices have disappeared now—I’m a new man. I can tell Mr. Chrétien and Mrs. Chrétien and their family I’m sincerely sorry for my actions on Nov. 5.”

“His disorder had cut him off from reality. He had delusions of grandeur, maybe even of a messianic mission. He thought he would be glorified for ridding Canada of this prime minister.”

That liberal approach, along with Bélanger’s decision last week, worries some legal experts—among them Karen Stelick, a columnist for Canadian Lawyer magazine. Stelick is a fierce critic of last May’s ruling in the Dorothy Joudrie case, in which the Calgary socialite was pronounced not guilty of shooting her husband because she was in a dissociative state due to alcoholism and emotional problems. The Dallaire case, Stelick says, falls into the same general category. “The more you allow excuses for this type of behavior, the more you will see it,” says Stelick, who practises law in Belleville, Ont. “We are going to extremes to find people innocent.” Others noted the stark contrast between Canada’s handling of the Dallaire case and comparable incidents in the United States. During his 1982 trial, John Hinkley Jr., who tried to kill then-President Ronald Reagan, was ushered into court in chains and sat in the courtroom behind bulletproof glass, dressed in prison fatigues. In contrast, Dallaire, sporting a blue windbreaker, jeans and white sneakers, moved freely—and watched his trial from the gallery.

As for the RCMP, controversy continues to swirl around their handling of the events of Nov. 5. On videotapes from the 24 Sussex Drive security system, introduced by the Crown as evidence during last week’s trial, Dallaire can be clearly seen strolling across the grounds—and waving to the cameras from time to time. But Chrétien’s guards reacted only after Aline Chrétien called to report an intruder in the house—almost an hour after Dallaire climbed the fence. As if in a bad TV sitcom, the first officer arrived at the front door only to discover that he had forgotten his key. The shamefaced RCMP are still doing their best to handle the public relations disaster. “There are a number of perceptions out there,” said Sgt. Mike Gaudet, an RCMP spokesman. “But nobody denies the obvious.”

After an internal investigation of the incident, four officers were suspended. They returned to work in March. Officials have still not decided what to do about their supervisor, also suspended, and Gaudet says that none of the findings will be made public. As a result of the foul-up, new electronic detection devices and more security cameras have been installed at 24 Sussex Drive. But some observers say the new equipment addresses only part of the problem. “It’s known among RCMP officers that the 24 Sussex job is one of the most boring—and until last fall the force did not dispatch its best people to carry out the job,” says Reform party MP Jack Ramsay, himself a former RCMP constable. “It is a question of leadership. Training must improve, and the new equipment they’ve purchased must be kept up to date.”

Dallaire’s future is now in the hands of the Criminal Code review board. Within 45 days, the five-member board, which includes a judge and a psychiatrist, must hold a hearing on the matter. They can allow him to continue living in a group home, send him to a psychiatric hospital, or give him a conditional release. In the event of Dallaire’s continued incarceration, his case will be reviewed once a year by the board to determine if he is fit to be released. “I am a new man,” Dallaire told reporters last week. Regardless, he has given a fresh meaning to the old advertising slogan—only in Canada. 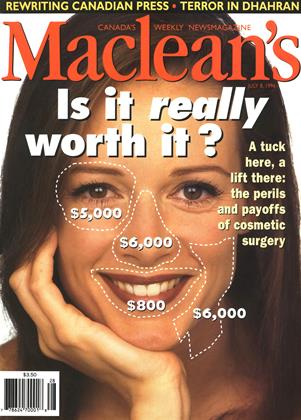