It is the closest thing to the miraculous most of us will ever know: the moment when an infant child, the embodiment of so many private hopes and fears, emerges wet, blue and bloody from a mother’s womb, and with a cry of protest announces its new presence to the world. That is one reason why it is so difficult to feel removed from issues of human fertility and birth. There is an inescapable sense of meddling with the sacred.

Yet, increasingly, we do meddle. In part, we are driven by the innately human instinct to protect our unborn young. But our growing understanding of the biological events that precede the miracle of birth also compels us. At a pace that astonishes and sometimes disquiets, medical science is shedding extraordinary new light on how babies come to be. Under that illumination, we are discovering powerful new tools for manipulating life during its first nine months—and, through genetic intervention, even before conception. We are reaching new understandings about how our behavior as fathers or mothers may harm our children even before we take them, newly born, into our arms. And in an echo of the unique mix of exhilaration and terror that strike the heart of every new parent, we find ourselves profoundly ambivalent about our new knowledge.

Several recent events in Canada and abroad have added to the disquiet (page 20). In Manitoba, a young woman addicted to sniffing solvents successfully fought off, at least for the moment, an attempt by child protection authorities to protect the five-month-old fetus she is carrying by forcing her into treatment (page 16). In Britain, employees of fertility clinics began to thaw and systematically destroy up to 3,300 frozen, fertilized human embryos—each one representing at least a potential human life—that were no longer wanted by the women and men whose genetic material created them. And in Ottawa, federal officials sought the public’s views on proposals to bring a burgeoning traffic in the building blocks of conception—human eggs and sperm—as well as in fertilized embryos and fetuses, under regulatory supervision for the first time in Canada (page 18).

What those divergent developments shared—apart from their power to unsettle—was roots in our new thinking about the first 40 weeks of life. Accumulating research into the effects of alcohol, tobacco and even caffeine on a developing fetus—effects that range from smaller birth size to permanent brain damage and physical deformity—has sharply increased pressure on expectant parents of both genders to modify their behavior.

Other medical innovations have even more dramatically

changed our perceptions of the separate existence, moral standing and mutability of embryonic human life.

Where once upon a time parents waited eagerly for birth to reveal the sex of their child, physicians can now select, from among half a dozen embryos fertilized outside the womb, the one that possesses chosen characteristics of gender or resistance to disease. Not satisfied to choose among the random genetic combinations of in vitro fertilization, other researchers are exploring ways to remove or insert individual genes into the 46 chromosomes that constitute the biological blueprint of each individual, hoping one day to weed out those responsible for genetic defects. The ability to store and transport embryos far from a mother’s body without significant constraint, and to reimplant them later —often in the body of a different woman entirely—has created a new and ethically dubious commerce in potential human beings.

Japanese scientists have successfully used an artificial womb to gestate a goat. Their next step: the development of a human version. Other researchers have confirmed the feasibility of human cloning, although none has publicly acknowledged trying to bring cloned embryos to term as identical babies. Only slightly more speculative is a nightmarish but technically feasible procedure to extract eggs from aborted fetuses and fertilize them with sperm harvested from a cadaver—to create children of the dead and the never-alive. Not possible yet but likely soon to be: designer offspring created by selectively implanting genes for desirable attributes like intelligence or size. ‘When you think of the implications of what we’re going to be able to do,” reflects Roger Rittmaster, an endocrinologist on the faculty of Dalhousie University in Halifax and a former president of the Canadian Fertility and Andrology Society, “it really is pretty interesting and scary.” Advancing science has left the law in the dust. On the narrow question of a woman’s right to an abortion, Canadian legislation has been silent since 1988, when the Supreme Court of Canada struck down the last law to restrict the practice. Three years later, the court found that a fetus, legally speaking, is without rights. But “rights” turn out to be different from society’s “interests” in the same bundle of tissue. In draft legislation tabled in the House of Commons in June, the Liberal government moved to create an array of new protections for the latter. The New Reproductive and Genetic Technologies Act would ban 13 controversial practices, including the sale of human embryos. Circulating among physicians and interest groups last week were draft regulations that will follow if the act is passed. They would create a new federal authority to license nonprofit sperm banks and qualified researchers who wish to experiment with embryos less than 14 days old. Underlying the new leg-

islation, Health Minister David Dingwall asserted, are two principles that reflect Canadian values: respect for the dignity of the human body, and a prohibition on commerce in human fertility.

But grey areas loom. Take pregnancy. Many would argue that no experience is more unequivocally a woman’s natural right. But the lawyers who represented Winnipeg Child and Family Services in their application last week to force a glue-sniffing mother into a treatment centre are not alone in arguing that society is sometimes justified in dictating how a pregnant woman conducts herself. While a woman may have an unqualified right to choose whether to continue a pregnancy, says University of Manitoba law professor Bryan Schwartz, others have a legitimate stake in the fetus’s health once she has chosen to carry it to term. For reasons both of compassion and economics—given the daunting costs of caring for a severely handicapped infant—he asserts that “society has an extremely high interest in protecting that child from preventable damage.” Further, Schwartz argues that if a pregnant woman refuses to give up behavior that is certain to injure her

child, “in rare and exceptional circumstances there has to be coercion” to protect the fetus.

Many feminists strongly disagree. Christine Overall, a professor of philosophy at Queen’s University in Kingston, Ont., admits that “I feel the revulsion, too,” at the horrific possibility of a woman subjecting her fetus to the effects of solvent abuse. But, she adds, “I nonetheless wonder what this might imply about the surveillance and possible future incarceration of other women. How many are you willing to lock up? How far are you willing to go?”

If that line is difficult to draw, then so is another. By its silence on abortion, Canadian law effectively allows a woman to undergo the procedure for any reason she thinks fit But the expanding scope of prenatal diagnosis and genetic testing is providing women with ever more reasons to at least consider ending a pregnancy. Many might well choose to do so if they learned that their fetus carried I a gene for rheumatoid arthritis, ¡E epilepsy or breast cancer. But I what if the genetic marker were I for some lesser problem, shortI sightedness, say, or male-pattern baldness?

§ Eight years after the Supreme Court of Canada settled a woman’s right to an abortion, defiant protesters still picket daily outside clinics in Vancouver and Toronto. And in the United States, the issue is expected to divide Republicans gathered in San Diego this week to nominate Bob Dole for president.

Meanwhile, some procreative options soon to be banned in Canada are readily available across the border. Ottawa would make it illegal to pay a woman to carry an implanted fetus on behalf of someone else—a practice known as surrogate motherhood. In the United States, surrogacy is viewed as just another fast-growing service industry. Infertile couples pay an average of $60,000 to have an embryo—usually fertilized in vitro—carried to term by a woman who typically receives less than a quarter of that fee. Prohibited from doing the same here, Rittmaster predicts: “Women will go and get surrogate mothers in the United States.”

Scary and interesting indeed. Like first-time parents determined to do the best they can for a miraculous new life, we have little apparent choice but to go forward—praying that our wisdom will somehow keep pace with our exhilarating—and terrifying—new knowledge. □ 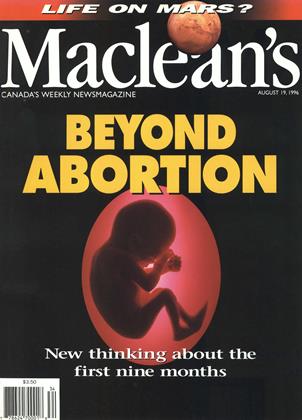