If Mother Nature is unleashing her wrath upon the earth, then China, the planet’s most populous nation, is reaping the lion’s share of woe. By the end of last week, 20 million people in southern and central China had been affected by the summer rains—and more that 1,509 killed—as the mighty Yangtze River

swelled to 94 ft., its highest levels since 1954. Nearly a million homes were washed away and nearly three million damaged. Fearing mass outbreaks of cholera and dysentery in the muddy aftermath of the disaster, authorities sprayed entire towns with chlorine and disinfected thousands of animal corpses before burial. “When you have more population, the human dimension of an act of God is multiplied beyond what we’re familiar with in Canada,” said Timothy Pitt, executive director of Doctors Without Borders Canada, which has sent a physician and a sanitation expert to join the international organization’s 29 other members now aiding Chinese authorities.

The scale of the tragedy is staggering. With rice and vegetable crops destroyed, total economic losses are estimated at more than $15.3 billion. As the three-week-old floods continued their spread last week, officials in central Hubei province ordered three million more people—roughly the population of Alberta—to help the three million soldiers and civilians already lining the banks of the Yangtze. They guarded protective dikes and used mud and sacks of

wheat to plug holes burrowed by snakes and rats. “We can’t relax our vigilance for an instant,” said a flood-control spokesman in the provincial capital, Wuhan. Elsewhere, in Guizhou province, a heat wave further tormented displaced flood victims. And to make matters worse, Typhoon Gloria was headed for south China at week’s end, after killing 20 in the Philippines.

Such conditions, which would create havoc in the industrialized world, are far tougher to handle in developing countries. “They don’t have the resources and infrastructure to respond,” says Pitt. Beijing set aside $23 million and the Red Cross Society of China appealed for $5 million from sister organizations around the world. The United States flew 16 tons of supplies to the central province of Anhui. But despite the appeals, by last week international donations had reached just $1.4 million. The Canadian International Development Agency, the body that distributes the bulk of Ottawa’s foreign aid money, had yet to approve funds. Private outfits such as Doctors Without Borders, meanwhile, struggled to do what they could. In one area, the group occupied a fourth-floor office in a building where water had risen to the third storey. “In some places we’ve found families trying to survive on pockets of land in the midst of raging rivers,” said Pitt. In recent weeks, similar devastation has hit Bangladesh, India, Italy and now Quebec. Whether the floods affect millions of Chinese, or thousands of Quebecers, the emotional toll is incalculable. 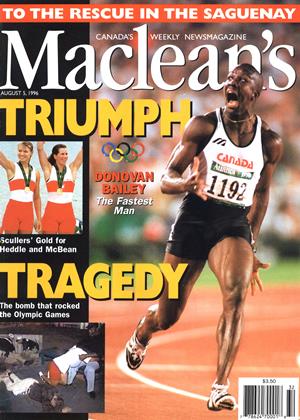