A man with a mission BRENDA BRANSWELL September 16 1996

Last week, the towers of Parliament Hill—this week, the skyscrapers of Wall Street. Under fire by Quebec separatists for his planned trip to New York City to lobby against the Parti Québécois government, Howard Galganov, the province’s vocal anglophone rights crusader, forges ahead, undeterred by criticism or his gruelling schedule. Last Wednesday, with several media interviews already under his belt, the 46-year-old advertising executive dashed off to Ottawa to lend his voice to a francophone campaign for bilingual commercial signs in the nation’s capital. Later that night, back in Montreal, he met with a group of local residents signing up for a seat on Wednesday’s New York-bound bus.

With good reason, given a schedule that includes coping with about 100 faxes and phone calls a day starting around 6 a.m. Although he insists he is speaking out only for himself, his campaign to protect the English language in Quebec has clearly struck a chord among many anglophones still reeling from last October’s tantalizingly close sovereignty referendum. “He is a white knight,” said one businesswoman who signed on for the New York trip.

Given the contentiousness of the language issue in Quebec, Galganov is also being called less flattering things.

“Extremist” is another word bandied about. “Imagine, being called an extremist for wanting equal rights,” Galganov responds. Those rights, he insists, are not negotiable—which is why he turned down a government invitation to appear at national assembly hearings that wrapped up last week on proposed amendments to Quebec’s French Language Charter. Among the more controversial: the re-establishment of the Commission de protection de la langue française—known derogatorily as the “language police”—disbanded by the previous Liberal government. The commission will enforce the province’s language laws, including Bill 86, the legislation that allows English to appear on commercial signs, but only if French is predominant.

Ironically, the newly revived debate over language is taking place

at a time when Quebecers in general have little stomach for it. Certainly, Premier Lucien Bouchard has shown little inclination to reopen the issue. Last April, at the PQ’s national council meeting, he narrowly defeated a hardline push to abolish Bill 86 and return to French-only signs. Still, the PQ has said that it will re-examine the question if the French language, especially in the linguistic battleground of Montreal, loses ground to English.

In fact, the rising tensions stem not so much from the language issue as from the looming prospect of another sovereignty referendum—and the possibility of separation. Galganov made headlines last spring when he organized a protest against retailers in a pre-

dominantly English-speaking area of Montreal who posted French-only signs. Since then, the Montreal native who now lives in semi-rural StLazare, just northwest of the city, has put the rest of his life on hold, leaving his ad agency in the hands of his wife and business partner, Anne. Now, he calls his crusade a “fight for Canada.” “We’re going to tell Americans how well we live together—that Quebec is a wonderful place to invest in,” he said of his two-day trip to New York, which includes a meeting with media and financial analysts at the prestigious Harvard Club. But he also planned to tell the Americans about the economic costs associated with the threat of separation, and the “institutionalized cultural exclusion” in Quebec, which includes restrictions on the English language and the lack of non-francophones in the civil service. “I will not be happy until the Parti Québécois is seen for exactly what it is,” Galganov said, “an ethnic nationalist party that is dedicated to excluding a major portion of its citizens.”

Galganov acknowledged that while he would be addressing Americans this week, his real target audience is Quebecers. “People sometimes see things more clearly when the message comes from outside the house,” he said. In some circles, the message has already been heard—and decried. Serge Ménard, the cabinet minister responsible for Montreal, urged Galganov to call off his trip. Patrice Simard, head of the Board of Trade of Metropolitan Montreal, said that Galganov “says he doesn’t want to hurt Quebec, but nonetheless that will happen.” And Gilles Rhéaume, vice-president of the proindependence Mouvement Souverainiste du Québec, announced his own plans to go to New York this week with a small group of francophones to “limit the damage.”

Galganov will not be alone on the streets of Manhattan. Montrealer retailer Paula Pedicelli is one of about 20 people who signed on to join

him. Galvanized by the referendum, Pedicelli, 50, told Maclean’s that, for the first time in her life, she has become politically active. Asked what she hopes to accomplish by going, she said: “Maybe to tell the politicians, ‘Enough.’ ” Also at the meeting to organize the New York visit was Ernest Strolovitch, an accountant once active in Alliance Quebec, an anglophone rights lobby group. “Until the October referendum, there was always the false sense that over the horizon things would get better,” he declared. “But when you come within half a percentage point of seeing the whole thing collapse, it’s not the same world any more.”

It is hard to gauge how widespread the support for Galganov’s brand of activism is among Quebec anglophones. (His grassroots Quebec Political Action Committee has no members.) Some clearly believe that it risks a backlash, and that a different, less confrontational approach is more prudent. (Galganov, in fact, says he has received several death threats.) But Montreal lawyer Eric Maldoff, founding president of Alliance Quebec, says that Galganov is tapping a deep sense of frustration and concern within the English-speaking community. Anglophones, Maldoff adds, “see their very legitimacy as full and equal Quebecers having been put and kept in serious doubt.”

With the language issue likely to resurface at the PQ’s national congress in November, Galganov will be ready. On that same weekend, he plans to open a clothing store with bilingual signs of equal size—in defiance of the commercial sign law. Does he think that will prompt a backlash at the congress? “I’m praying for it,” he says. “I want the premier of Quebec to decide if he’s just a separatist premier—or if he’s a premier for all Quebecers.” Galganov’s phone rings again; like the man, it doesn’t seem to stop.

THE PQ SAYS NO TO THE COURTS

Quebec City lawyer Guy Bertrand’s high-profile legal challenge to Quebec sovereignty has entered a curious phase—the former separatist-turned-federalist now finds himself without a court adversary. In late August, Bertrand, who has been supported by the federal government, won a victory in his fight to seek an injunction against any future Quebec referendum that could result in a unilateral declaration of succession. That happened when Quebec Superior Court Judge Robert Pidgeon ruled against the Parti Québécois government’s motion to have the case dismissed. Then last week, Justice Minister Paul Bégin announced that he would not appeal the ruling, stating flatly that the courts have no jurisdiction over Quebec’s future—and that the government will not appear in court if Bertrand contin-

ues with his legal battle. “The only judge and jury of Quebecers’ future is the people themselves,” Bégin said.

Bertrand branded the PQ decision to ignore the courts a “partial declaration of sovereignty.” He also said that he has not yet decided whether to proceed with the challenge, in which he argues that a unilateral declaration of Quebec’s independence would violate his constitutional rights. In part, his decision depends on Ottawa’s continued support, and the federal government initially waded into the case last spring—to the chagrin of the PQ. But last week, Ottawa was noncommittal about any future involvement. A spokesman for Justice Minister Allan Rock said that “he will review the decision and make any sort of determination in consultation with his cabinet colleagues—no time frame has been set.”

Bertrand appealed to the public to pressure Ottawa into staying with the case. But the federal government’s hesitation is to some degree understandable: continued involvement could fuel arguments by separatists that the political process in Quebec is being subverted by outside forces. Still, the PQ’s decision to walk away from the courts also left the Quebec government open to criticism. Montreal constitutional lawyer Julius Grey, for one, told Maclean's that while he believes the Bertrand case is premature and too hypothetical, he also considers Quebec’s decision to be “absolutely wrong.” Said Grey: “I can see no excuse for the Quebec government not going to court—you can’t just say, This isn’t judicial.’ ” Bertrand, meanwhile, has said he will reveal on Sept. 19 whether he intends to abandon the case—or proceed with what may amount to legal shadow boxing. 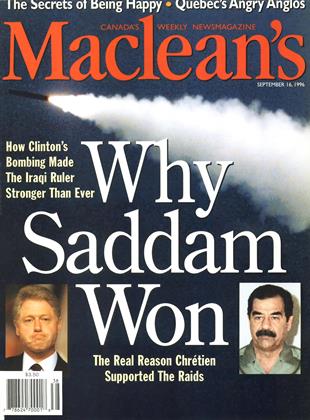