To the uninitiated, it looks no more exciting than a long, thin log of grey plasticene. But to scientists like Jeffrey Fox, a Texas geologist who oversaw its extraction last week from the bottom of a deep bay 16 km north of Victoria, the 9.5-mlong sausage of mud, seven centimetres across, constitutes nothing less than a diary of the Earth’s history since the last ice age. Taken from Vancouver Island’s Saanich Inlet during two days of drilling by the JOIDES Resolution, a one-of-a-kind research vessel, the seabed sample is a repository of previously unknown details about the ancient climate, wildlife and vegetation of Canada’s west coast It is also just one of thousands of such samples that the ship has retrieved from ocean sites around the world as part of a multiyear research project.

Says Fox, director of science operations for the vast undertaking: “We are to an understanding of the Earth’s history what the Hubble telescope is to an astronomer who seeks to understand deep space.” By any measure, however, the core samples taken from Saanich Inlet are extraordinary. The reason: the long, narrow ijord’s highly unusual configuration. In common with only a handful of other locations around the globe, the 26 km-long inlet is deep—up to 230 m— in the middle, but comparatively shallow at its open northern end. As a result, the powerful tides that regularly flush the rest of the B.C. coast have little impact on the bay’s deepest parts, where the water has lain undisturbed so long that it is virtually devoid of oxygen. That, in turn, means that no life exists in the bay’s depths to disturb the silt, animal remains and other debris that have collected there in layers year after year. By analysing those layers of debris, scientists hope to reconstruct the natural history of coastal British Columbia with an unprecedented degree of accuracy. So minutely detailed is the historical record hidden in the sediment that scientists “can actually see seasonal layers,” enthuses Brian Bornhold, the Canadian marine geologist who proposed the drilling location.

What researchers expect to find in the ancient mud, however, may shed as much light on the future as on the past. Layers of sand that indicate sudden disruptions of the seabed will extend the record of known major earthquakes in the Pacific Northwest back from the current horizon of about 500 years before Christ, to more than 10,000 years ago. Researchers hope to use the information to help determine the likelihood of a major quake in the near future. Similarly, analysis of fish scales and teeth embedded in the mud may show whether the population of such species as salmon and herring fluctuate according to natural cycles—or whether their declining numbers now are solely the result of man’s intervention.

It took less than 72 hours last week for researchers to uncover the first evidence from the past with disturbing implications for the present. B.C. government botanist Richard Hebda, one of two dozen Canadian scientists involved in the initial examination of the Saanich Inlet cores, discovered strong indications that, at least once in the not-so-distant past, the Canadian climate has changed for the worse with catastrophic speed. Hebda found signs that, about 11,000 years ago, average temperatures on the west coast plummeted—within a period of a few years—from close to their modern-day values to a frigid range more common near the North Pole, and then remained in the deep freeze for several centuries. “Geologically speaking,” Hebda says, “it is an instantaneous change of the climate.” In light of a gathering scientific consensus that manmade pollution may be pushing the global climate towards similar changes, the evidence of such past shifts, Hebda said, “is pretty scary.”

Still, it is to uncover just that kind of information that the 143-m JOIDES Resolution undertakes half a dozen research cruises annually from its base in Texas. Built in Halifax in 1978 as a deepsea oil-drilling vessel, the ship was refitted in 1984 with laboratories and specialized equipment. Now, at an annual cost of $60 million—60 per cent of it paid by the U.S. government, the rest by various other national science programs, including Canada’s (about $1 million a year)—the ship is capable of sampling the Earth’s crust at depths of more than eight kilometres beneath the surface of the sea.

After collecting seven core samples in the bay north of Victoria last week, the ship was set to resume an investigation of the Juan de Fuca Ridge, a region of deepsea volcanic activity some 370 km west of Vancouver Island. There, its crew of scientists hoped to expand their understanding of how seawater reacts with lava to form mineral deposits. Significant as that work may be, however, it is unlikely to eclipse the excitement of researchers like Hebda and Bornhold over the lessons to be learned from the plain, grey mud of Saanich Inlet 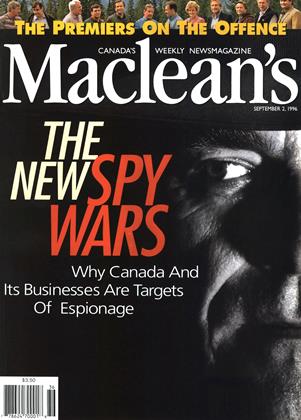