It is an ordinary-looking piece of Ontario bush country: a rocky tract of real estate dotted with pine trees overlooking the Ottawa River. But the federal government has plans for the land at Deep River, 160 km northwest of the capital. Last week, negotiators for Natural Resources Canada met with town officials to work out details of an agreement to create a final resting place for 131,400 tons of troublesome, low-level radioactive waste that is to be removed from in and around Port Hope, a community on Lake Ontario, 250 km to the south.

After being hauled to Deep River by train, the waste would be sealed in a cavern perhaps 200 feet underground. The purpose of the plan: to deal with a messy legacy of uranium refining in Port Hope 50 years ago that left the area strewn with low-level nuclear waste, some of which has leaked into Lake Ontario. But critics charge that Ottawa’s proposed solution now raises the spectre of the waste leaking into the Ottawa River.

“It seems crazy,” says Ole Hendrickson, a local opponent of the plan. “Ottawa is planning to spend millions of dollars to get rid of one leaky radioactive waste dump and create another one.”

Environmental concerns are only one of the many issues raised by the proposal. The enormous costs are another: just finding a community willing to have the waste stored 8 within its boundaries " has so far cost an estimated $20 million— and building the facility and moving the waste to Deep River would add more than $400 million to the bill. There is also a question of credibility. In return for Deep River agreeing to the controversial proposal, Ottawa has promised the town $8.75 million in cash benefits, as well as a 15-year guarantee of job security at the Atomic Energy of Canada Ltd. complex in nearby Chalk River. The AECL laboratories, which employ

more than 2,000 people, are the town’s biggest employer. And the proposed job guarantee comes at a time when public concern over nuclear safety and flagging reactor sales have raised doubts about the corporation’s future.

communities. Although the facility would be built on Deep River’s territory, most of the town’s roughly 4,600 residents live upriver from the proposed site and would not be affected if radioactive waste leached into the river. But more than 20 communities that would be downstream from the facility—including Petawawa, Pembroke, Arnprior and Ottawa in Ontario and Pontiac and HullAylmer in Quebec—are opposing various aspects of the proposal. Among their fears is that radioactive radium, uranium and thorium, as well as potentially hazardous arsenic left over from ores refined years ago in Port Hope, will seep into the Ottawa River. “Deep River is getting the money,” says Kelly O’Grady, a mother of five young children who lives in Pembroke, 43 km downstream, “and we’ll get the pollution.”

Federal officials insist that there is not a serious pollution risk. But according to a geological study commissioned by Ottawa, at least a trickle of radioactive contaminants from the dump would likely begin reaching the river within 100 years. The report said that a test borehole drilled into rock at the site, less than a mile from the Ottawa River, contained more than 3,800 fractures, “of which 57 are open, or likely open, to water.” Federal officials point out that full-scale geological studies have yet to be done— and that, if necessary, fractured rock could be sealed by man-made barriers. ‘To raise the spectre of all hell breaking loose is a total scare scenario,” says Peter Brown, director of Resources Canada’s radioactive wastes division, which would oversee construction of the facility. ‘The government is just not going to let anything like that happen.”

That does little to reassure some critics in an area where AECL’s Chalk River complex—which operates a nuclear reactor for research and to produce radioisotopes for medical purposes—often releases small amounts of radioactive cesium and tritium into the local environment. Some downstream residents fear that, inevitably, leakage into the river will occur, adding to local levels of radioactivity. “It’s a question of whether you believe that there is a level below which there is no danger from radiation,” says Hendrickson, who helps to run a small, Pembroke-based organization that opposes the plan. “There is a lot of evidence suggesting that there is no safe level as far as human health is concerned.”

The problem that the Deep River proposal is intended to solve dates back to the 1930s, when Eldorado Mining and Refining Ltd. set up a refinery in Port Hope to extract radium from ore mined in the NorthwestTerritories. In those days, radium was used, among other purposes, to make wristwatch and instrument dials glow in the dark.

But Eldorado’s operations were far from profitable, until the drive by the Second World War Allies to develop atomic weapons created a demand for the firm’s waste product—uranium. In 1944, the firm became a Crown corporation, and Eldorado Nuclear Ltd.’s Port Hope plant refined uranium for atomic bombs, including the two that devastated the Japanese cities of Hiroshima and Nagasaki in August, 1945.

Eldorado prospered with the Cold War, but nuclear waste disposal practices in that period were casual. Radioactive leftovers and arsenic-contaminated wastes were buried on vacant land or dumped into landfill sites. Later, official waste burial sites were established in neighboring townships. In a major cleanup during the 1970s, about 21,600 tons of contaminated soil and other materials from Port Hope were trucked to Chalk River for storage. That left about 198,000 tons of radioactive waste scattered around Port Hope, or buried in dumps in surrounding Hope Township and neighboring Port Granby. Says Patricia Lawson, a Port Hope resident who is helping to organize a health study in the area: “It’s everywhere. It’s in the harbor, along the lakeshore, in the ravines and it’s in some people’s backyards.”

Ideally, the cheapest and safest way of dealing with the wastes would be to build a permanent storage facility in the area. But Port Hope has twice rejected that idea—in 1986 and 1995. Furious local opposition led to a breakdown in negotiations between Ottawa and the town council. The federal proposal, says Ross Hume, a retired Port Hope business executive who spearheaded the opposition, “was a lunatic scheme—a cynical attempt to kick this stuff under the rug.”

Port Hope was just one of the Ontario communities that considered acting as host to the dump—only to reject the idea. In 1986, a federally appointed task force approached 850 municipalities, and at one point about a dozen considered accepting cash and other benefits in return for taking the waste. But by last September, every community had decided against the proposal except one—Deep River. Critics accuse federal officials of trying to mislead the communities in the early stages of the search. “They behaved as guardians of the status quo, telling people not to worry about the radioactive risks,” says Norm

Rubin, nuclear spokesman for the Torontobased environmental organization Energy Probe. “That’s why some of the communities said No—they knew they weren’t hearing the whole story.”

Disposing of low-level materials is just the beginning of the nuclear waste headaches facing Ottawa. Even more daunting is the question of what to do with more than

ly radioactive spent fuel from Canada’s 22 electricity-generating CANDU reactors. For experts from a dozen countries meeting in Winnipeg this week to discuss deep burial techniques for nuclear waste disposal, one of the scheduled conference highlights is a visit to the AECL laboratories near

Pinawa, Man., 100 km to the east. There, scientists have developed proposals for depositing spent fuel in canisters sealed thousands of feet underground. Hearings are currently being held on the safety and acceptability of the concept.

If Ottawa decides to go ahead with deep burial of high-level waste, site selection might begin several years from now. But the difficulty in finding a community willing to take low-grade nuclear waste suggests the new search could be an uphill battle. That, in turn, persuades some critics that the time has come to phase out nuclear power generation altogether. “One obvious solution to the nuclear waste disposal problem,” notes Rubin, “is to stop making the problem.” Meanwhile, after a costly, decade-long struggle to find a final resting place for Port Hope’s waste, federal officials face the grim prospect that the Deep River site could prove to be environmentally unacceptable. What would happen then? “I guess we’d sit down and cry,” says Dan Seekings, a senior adviser at Natural Resources. “And then we’d just have to start the whole process again.” 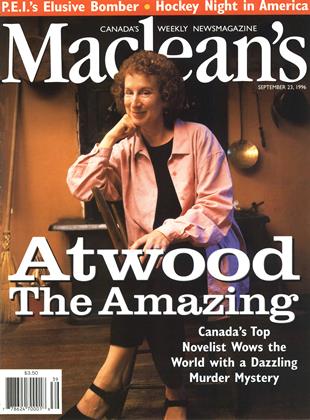