At a time when great Hollywood roles for women over 40 are about as rare as smog-free days in Los Angeles, the idea of a female revenge comedy starring Bette Midler, Goldie Hawn and Diane Keaton sounds too good to be true. It would be hard to find three more disparate comedians, and each gets to push her particular comic style to the limit. The result is a comic trifle layered with Midler’s sulphuric wit, Hawn’s wide-eyed clowning and Keaton’s neurotic self-effacement. But their performances are swamped by a movie that is overdirected and overproduced, and tries too hard to be all things to all people— a revenge comedy, a screwball farce and a feminist tale of positive self-affirmation.

Based on the best-selling novel by American author Olivia Goldsmith, The First Wives Club revolves around three Manhattan women whose successful husbands dump them in favor of younger girlfriends. Brenda (Midler) watches her mate, a retail elec-

tronics magnate, fall into the arms of a ditzy social climber (Sarah Jessica Parker). Elise (Hawn), an actor married to a director, loses her place on his casting couch to a vapid starlet (Showgirls star Elizabeth Berkley). And Annie (Keaton) naively waits for her husband, an advertising executive, to come

back to her while sharing his suspiciously attractive therapist (Marcia Gay Harden).

As the three wives conspire to get even, the antic comedy pushes them through scenes of giddy, giggling hysteria that seem wildly out of place in a film about female empowerment. Of the three stars, only the imperious Midler maintains her dignity. Keaton seems the most uncomfortable, par-

odying her Annie Hall persona as (in Elise’s words) “the one who can’t manage a simple declarative sentence.” Hawn, meanwhile, has the juiciest role. Camping it up as a vain movie star addicted to alcohol and plastic surgery, she gets to send up her own profession. And Hollywood gender politics is what The First Wives Club is really about. ‘There are only three ages for women in Hollywood—babe, district attorney and Driving Miss Daisy," Elise says. “Sean Connery, he’s 300 years old but he’s still a stud.”

But despite the clever jabs, and even with cameo support from Ivana Trump and Gloria Steinern, the film’s three stars still seem trapped by Hollywood formula—choked by the heavy-handed direction of Hugh Wilson, who created the first of the Police Academy movies, and a smarmy script by Robert Harling, who wrote Steel Magnolias. Now there’s a new concept in feminism: Police Academy meets Steel Magnolias. Perhaps The First Wives Club should be more discriminating about its membership.

that has him climbing into an elevator shaft and beating an FBI thug senseless is too much to ask. Extreme Measures was produced by Grant’s girlfriend, the tolerant Elizabeth Hurley. Perhaps she sees heroic qualities in him that elude the casual observer.

Under the direction of British film-maker Michael Apted (Gorillas in the Mist), Extreme Measures starts out with some promise. His camera swoops from the Man-

hattan skyline into an alleyway, where two naked men, suffering from delirium, burst out of a door and flee into the night. One of them ends up in an emergency ward, where Guy (Grant), the resident physician, watches him die from mysterious symptoms. The men turn out to be victims of a secret medical experiment, in which an eminent scientist named Myrick (Gene Hackman) uses homeless patients as unwitting guinea pigs.

As Guy unravels the conspiracy and confronts a stonewalling hospital bureaucracy, he puts his career, and his life, at risk.

While the intrigue lasts, Extreme Measures is reasonably compelling. The traumaward scenes unfold with the breathless urgency and clinical detail that ER has turned into basic dramatic vocabulary. There are also a few well-placed shots at the U.S. medical system. When Guy uses hospital resources to investigate a patient’s death, a superior tells him: “This is not the Royal Shakespeare, pick-up-the-tab health-care system.” And Grant’s character wriggles through a typical dilemma of medical ethics. In an early scene, after he gives priority treatment to a cop—as opposed to the more seriously wounded drug dealer who shot him—there are flashes of the guilty, apologetic stumbling that has become integral to the Hugh Grant persona.

But after some token concessions to his comic charm, and a hint of romance that goes nowhere, Extreme Measures lapses into an extremely conventional thriller, a movie as generic as its title. There is some irony in seeing Grant play a talented professional who throws his reputation to the wind with an act of indiscretion. A thriller that leaves room for such idle musings, however, is not doing its job. 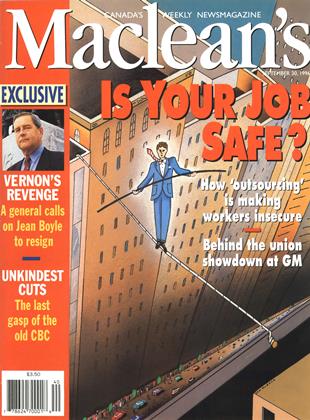