On Feb. 23, 1959, Canada Post issued a commemorative stamp on the occasion of the 50th anniversary of the first powered flight in Canada, that of J. A. D. McCurdy aboard the Silver Dart. Just three days before, Prime Minister John Diefenbaker had announced to a hushed House of Commons that the Arrow contract was being terminated immediately (“Raising the Arrow,” Cover, Jan. 13). Everyone recognized that the blue trio of delta-wing jet aircraft thrusting skyward, silhouetted behind the Silver Dart on the stamp, could only be our beloved Arrow. The Arrow died that week and the post office gave it a beautiful philatelic epitaph.

That the cost of the Arrow spiralled out of control is a matter of record: to $9 million per aircraft from $1.5 million within a period of five years. As for the F-101 McDonnell Voodoo fighters (which the Royal Canadian Air Force acquired in 1961) being “barely capable of breaking the sound barrier,” that plane already held the world speed record of 1.83 times the speed of sound. And it is not very

likely that the CIA was nervous about the prospect of a foreign aircraft outperforming its top secret U2 spy plane. This high-altitude, subsonic reconnaissance aircraft bore no relation whatever to a supersonic fighter. I never heard my National Research Council colleagues predict that the Arrow would not achieve supersonic speed, as recalled by former Avro engineer James Floyd. But in any event, it was not the performance of the aircraft that is significant; the Arrow was doomed for other reasons. The unrealistic notion of an independent role for the RCAF in the defence of North America yielded a specification for a complex and expensive weapon system for a national market too small to support the necessary research and development. The success of Canada’s aeronautical design—from Pratt and Whitney engines, de Havilland Beavers and Dashes, and Canadair jets—can be seen in the skies of many countries; there is no need to invoke the Arrow episode to prove it

I greatly enjoyed your coverage of the making of The Arrow and the profile that was done on me (“Easy rider”). Everything was faultlessly accurate, except for one thing. You wrote that, although I don’t own the House of Blues chain, I serve as a “mouthpiece.” In fact, as a founding investor/shareholder and one of the seven directors on the board, I feel it’s important to let our prospective Canadian partners know that I put my money where my mouth is.

It wasn’t until I read Apollo: The Race to the Moon by Charles Murray and Catherine Cox, a history of the engineers who worked on the American moon-landing mission, that I realized that the story of the Arrow is one of the world’s great what-ifs. The authors quote a source who thought that the flood of suddenly unemployed world-class aerospace engineers from Canada was essential in meeting U.S. president John F. Kennedy’s commitment to landing humans on the Moon. What if the Canadians hadn’t gone to the States?

The cost of care

The current crisis in our medical system (“Radical surgery,” Cover, Dec. 2) is simple to figure out. The culprit is plain old overuse. It’s just too easy to access the system. Add inefficiency to this and you have a tired-out system. Everyone should be prepared (it’s coming) to pay deductibles out of pocket— $250 for a single participant and $500 for a family, yearly. This one single item would and will discourage using the health-care system for frivolous problems. For the next $5,000 of in-hospital expenses, 20 per cent of that should be paid by the user, out of pocket. For those who cannot afford to pay, the government will then step in and cover these expenses by a means test of those whose incomes are on the low end of the spectrum. If we want to save the system and keep it fairly intact, we must solve the problem of overuse for minor things.

What if the Russians had landed on the Moon first and established a permanent presence? Would the space race have continued and would space today be a battleground? The Avro did not just alter history; its demise was pivotal in what many would consider the pivotal event of this century.

Rumor has it that one Arrow got away and that it was successfully kept out of the hands of “Dief the thief.” If so, whoever perpetrated such a dastardly act must be exonerated—venerated even—and persuaded to bring this national icon back into the light. There must be an understanding, however, that it can be quickly hidden again should the Conservatives threaten to regain power.

You say that it was “debatable” whether Canada could “nurture its own aerospace industry.” Well, we did. What the hell do you think they build at Canadair, yo-yos?

lVX13) contains a misleading statement attributed to me that must be clarified. I have always advocated that realistic and appropriate standards (including phys-

ical) be applied to each job in the Canadian Armed Forces, and applicants, regardless of gender, be required to meet them. I have never asked that physical strength standards be lowered for women, which your article implied. We expect infantry training for women and men to be tough and strenuous, both physically and mentally, but not abusive. In the case of Capt. Sandra Perron, I believe a line was crossed. Furthermore, I retired from the Canadian Armed Forces, not the “army.”

Maclean’s, like most Canadian media, has been relentless in reporting real and perceived scandal in the military, while giving minimum coverage to positive initiatives. Normal practice has been to quote one or two disgruntled former department of national defence employees, treating them, or other ambiguous sources, as authorities on all things negative. Much has also been made of military leadership, but there is little mention of the political direction under which the military functions. It appears that mass punishment has been adopted as the leadership style of choice by the politicians in power. In 1995, the minister of defence, with the full support of the Prime Minister and against the recommendation of the chief of defence staff, disbanded the elite Canadian Airborne Regiment, offhandedly disgracing hundreds of proud and trained soldiers to punish a few wrongdoers. Now, the present minister, in an impulsive reaction to a 1992 incident involving Capt. Sandra Perron, has decided to freeze all officer promotions until April, possibly in the belief that this will enhance morale and somehow cleanse any residual dirty laundry. In addition, the minister has chosen to allow the Forces to operate without naming a new chief of defence staff. One could indeed wonder at exactly what level the leadership problems really start.

à The Road Ahead

Money is a useful tool to create a free economy, and balancing the public books is a worthy goal. But money is not an end in itself—it is only the means to an end, one that we must first define. True leadership involves more than just deficitcutting. It means offering a vision and a means of balancing all issues.

It is time to slow down and discuss our priorities in the open. No handful of politicians, regardless of good intent or presumed mandate, has the monopoly on knowledge and information to make fundamental changes to public policy without consulting the public. Giving ministers sole power to make decisions without prior public consultation and proper accounting for their actions is not democracy.

Balancing the budget by putting the planet and its people at risk is being irresponsible to say the least. In Ontario, relaxed environmental regulations without proper enforcement, lack of proper truck inspections, reduced snow-clearing budgets, reduced safety monitoring of industry, and inadequate funding to maintain our justice system are examples of how the public’s safety is being

ignored in the pursuit of balanced budgets.

Everything on our planet is interconnected. The movie Apollo 13 clearly showed the danger astronauts faced when their craft lost its ability to recycle and purify their air. The planet Earth is a living spacecraft that also requires clean air. But Canada is lagging behind other industrialized countries—and its own commitments—in its efforts to reduce or stabilize greenhouse gas emissions. Unless we lower our production of industrial emissions and halt the destruction of forests, we may be endangering our future—and the future of our children—sooner than we think.

The destructive storms, floods and extremes in weather due to climatic changes resulting from the greenhouse effect are already upon us. These will only get worse until we change our present pattern of avoiding environmental responsibility. Amid all the focus on reducing the budget deficits throughout the country, one of the top news stories of 1996 was the Saguenay flood. What good are balanced books if our jobs, our homes and our factories are destroyed by our environmental negligence?

Laurier in the family

I enjoyed the review of Laurier LaPierre’s Sir Wilfrid Laurier and the Romance of Canada (“Creating the idea of Canada,” Books, Jan. 13). Emphasis was rightly centred on Laurier as the “Great Conciliator” between the English and French founding peoples. A seminal, early experience of Laurier’s, which prepared him for this role, and enabled him to learn English, was the year

spent with a Scottish-Presbyterian family in New Glasgow, Que., when he was between 11 and 12. All through his life, Laurier would refer back to his time working in the store and sharing the supper table of John Murray, my maternal great-great-great grandfather. I have often flattered myself to say that I am practically related to the prime minister on the $5 bill. 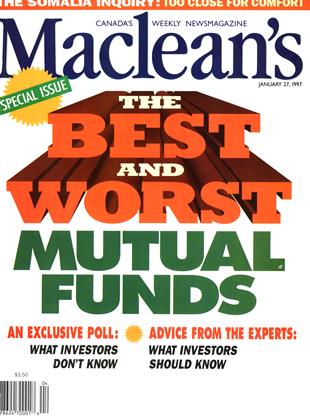