She is the newest president of one of Canada’s oldest and wealthiest research institutions, a university whose faculty includes a Nobel Prize winner, and whose 32,000 students are among the brightest in the country. In the circles that matter, she is admired as a strategic thinker—a key player on the National Advisory Board on Science and Technology, the mastermind behind the University of Alberta’s lucrative Research Makes Sense awareness campaign. But when Martha Piper assumed the president’s office at the University of British Columbia in July, the first thing she hung by her desk was a simple samj pier, hand-embroidered by a former executive assistant as a Christmas present, with the words of artist Georgia O’Keeffe: “It takes more than talent. It takes : a kind of nerve ... a kind of nerve, and a lot of hard, j hard work.” “That,” says Piper, “is my mantra.”

Talent, yes; hard work, of course. But how many can match the nerve that Piper displayed, centre stage, at her September installation? Having delivj ered two-thirds of her speech before a crowd of 1,100, she calmly removed her mortarboard, j plunked a funky blue baseball cap on her head—and challenged her guests to join her in donning their “thinking caps” about the future of UBC. As Piper tipped her hat, emblazoned with “Think about it,” to the UBC student choir, they broke into a gospel chorus of UBC: Think About It, penned for the occasion.

“I knew it was the right thing to do,” recalls Piper, j “But holy moley—it wasn’t easy!”

It takes a kind of nerve to say goodbye to pomp, to embrace circumstance. But like her hero, Georgia O’Keeffe, who broke rank with her peers, Piper is no handmaiden to convention. For months now, she j has had her thinking cap on, envisioning opportunities for UBC. Internally, her highest priority is a total rethinking of undergraduate education. “Our students are extraordinary, our faculty are world renowned,” says Piper. “And what really distinguishes us is the excellence of our research. Somehow, we have to marry those into the learning environment, and we are uniquely poised to do so.”

Called “research-based learning,” Piper’s vision involves a strategic revamping of many elements across j the university. Undergrads would be inextricably linked to research teams; information technology would allow students to access course information, freeing professorial time for interpretation, analysis and evaluation. “Everything would be hooked together, from scholarships to curriculum,” says Piper, “in light of a learning philosophy.” The new president hopes to have the plan approved and in place next fall. “We’re going to have to agree to it as a community,” she says, “and there will be a lot of debate. You cannot transform an institution like this overnight. But I’m not shying away from saying that I think this makes sense. I’m not real patient. I don’t have a lot of time.”

And Piper’s sense of urgency is equally strong when it comes to building strategic partnerships with her immediate community and the world beyond. In fact, so persuasive was she in a recent speech, connecting the dots between UBC’s strength and Vancouver’s future prosperity, that the president of a local forest company requested 6,000 of her thinking caps to distribute to his employees and UBC students.

It takes a kind of nerve—the same kind of nerve shown by academic leaders across the country, battling for private dollars to counter this simple fact: since 1993 core funding to Canadian postsecondary education has dropped by $2.29 billion, or 34 per cent. Never before has the drive for alternative sources of income been more critical. And in Ontario, where 40 per cent of Canadian students are educated, $539 million has been been cut in the past five years. This week, Peter Godsoe, chairman of the Bank of Nova Scotia and chancellor of the University of Western Ontario, is hosting Ensuring Excellence, a high-profile summit in Toronto on the future of Ontario universities, with Premier Mike Harris on hand to speak. Asked what questions he would like Harris to answer, University of Toronto president Robert Prichard responded: “Given that access to high-quality higher education is the single best predictor of an individual’s economic prospects, and given that every other public service in Ontario is funded at or above the national average, why would you be starving colleges and universities at the very moment when citizens, business leaders, young people and government all agree that access to high-quality higher education is the secret to their future?”

When Canadian universities look for solutions, they often cite the University of Michigan as a shining example of a public institution that has weathered similar challenges—and excelled. Says Paul Davenport, president of Western: ‘The Michigan model is very inspiring: less government regulation, a strong commitment to student aid and loans, and incentives for academic excellence.”

James Duderstadt, president emeritus of the University of Michigan—which recently completed a $ 1.4-billion fund-raising campaign— will be a speaker at this week’s forum. But he is no stranger to the crisis in Canada: last August he participated in a conference in Toronto headed by then-Ontario Education Minister John Snobelen. In the aftermath, he wrote to Snobelen outlining his prescriptives for curing what ails Ontario universities—and their Canadian counterparts. Obviously, says Duderstadt, what’s needed is “adequate investment to establish quality” and the acceptance of a highly diverse system, with no attempt to create a series of identical universities.

Above all, he believes in autonomy. “Higher education is going through the most dramatic changes in two centuries,” says Duderstadt. “The capacity of institutions to respond involves much more control over their destiny. You can’t respond in a robust, effective way with any kind of centralized plan.”

It will take a kind of nerve, a rethinking of the entire system.

But Duderstadt believes that, without a radical rethinking,

Canadian universities will be permanently crippled. ‘You have to realize that the old constraints no longer apply,” he warns. “If there is a single strategic commodity driving world commerce, it’s brains. North Americans will be competing for the opportunity to provide educational services.” Duderstadt cites the example of Britain’s The Open University, saturating the Internet with advertising: “They say, ‘Enrol in our programs, we’ll give you degrees and we don’t really care if they’re recognized in Canada because they’re recognized by Cambridge and Oxford. And we’ll do it at one-tenth the cost.’ ”

While some would argue that a more diverse system is already emerging in Canada, few believe that there is adequate funding or any autonomy to speak of—and the results are ominous. Take the so-called brain drain, for starters. There are 1,400 fewer full-time professors holding appointments at Canadian universities than there were two years ago. ‘The competition for faculty is going to be a nightmare,” says Bernard Shapiro, principal of McGill University in Montreal, “and it relates to the core funding problem. We can recruit brilliant people, but keeping them when they’re between 35 and 45 is another thing. Canada is not an island.”

And if presidents think they’re strapped, what about students? Given that the average debt load is $25,000 for an undergraduate degree—and that doesn’t account for lost earnings—many are deciding to forgo the experience altogether. Yes, the federal government has woken up and smelled the coffee—witness the announcement of the Millennium Fund, which takes effect in the year 2000. But that’s cold comfort for those already mortgaging their futures. Last year, 30,000 students defaulted on their student loans, and students with dependents were highest on the default list.

Hoops Harrison, national director of the Canadian Alliance of Student Associations, which represents more than 200,000 students at 13 universities, is blunt: “We have this principle of equal access, but nonswimmers are drowning.” Last week, CASA circulated a position paper to the federal finance committee and the Prime Minister’s Office, lobbying for an entirely new loan repayment plan. Also on their wish list: having Ottawa match Washington’s recent decision to make interest on student loans tax deductible; a $3,000 grant per loan year for all students with

dependents. “White-haired politicians have already accessed a much more supportive system,” says Harrison. “If you teach young people that they can’t access life preservers, it will come back to haunt everyone.”

Without radical rethinking, universities will be crippled

No doubt: experts say that by the year 2000,45 per cent of all new jobs will require more than 16 years of education. In other words, the undergraduate degree will be the bare minimum. And as academic leaders battle underfunding and fight for new sources of revenue, it is often the undergraduate who pays the price. As one seasoned university administrator at a highly ranked university put it: “Critics are bang on when they say that first-year students are not being treated the way they used to be. I wonder if students are aware of just how much they are being shortchanged?” The Maclean’s ranking of Canadian universities is designed to measure each school’s ability to preserve excellence in undergraduate education. The three winners this year—Toronto, Simon Fraser and Mount Allison—all earned high marks for fostering strength in difficult times. But they are not alone. For the first time since 1993, all major Canadian universities have taken part in the survey. This offers the prospective student a unique window into the undergraduate experience: where are the small classes, the smart students, the opportunities for guidance from tenured faculty? Each campus has distinctive strengths. The choice should be well researched, and ultimately, intensely personal.

This year’s survey paints a clear picture of what’s happening on Canadian campuses. Forty-four per cent of the universities reported a drop in their operating budgets. Fifty-six per cent have increased class sizes across the board. Forty-nine per cent report that they have fewer first-year classes taught by tenured faculty, and that their students are taking longer to graduate. The good news is that 84 per cent have upped their scholarship and bursary figures, and 70 per cent are allocating a larger proportion of their budget to student services.

The battle to preserve excellence in Canadian universities has never been more critical, the stakes never higher. Changes to funding and to student assistance must be won, and the community at large must lend its weight to the fight ahead. As Martha Piper and her colleagues know, it will take talent, nerve and a lot of hard, hard work in the years to come. Think about it. □ 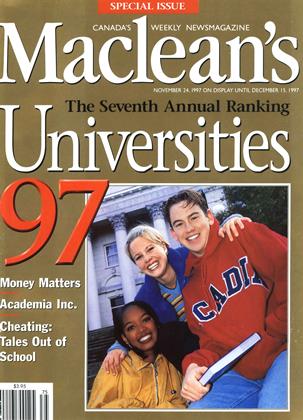