Tradition is a wonderful thing, supposedly the glue that keeps our society on track. We must respect our history, goes the line, or we will never learn from it. Tradition is our lodestone.

This is true, in part. Fred Astaire, before he died, said he felt sorry for modern young people: “How can you learn manners when you’ve never seen them?” It is not true, in part.

Witness the present Royals—what has tradition taught them?

Tradition is also a crock when it comes to Parliament and the most overlooked factor of Paul Martin’s budget is the way he approached it.

He knows, as any sane person does, that the arcane, sacred tradition of “budget secrecy” is as dead as the buttonhook. But the myth goes on.

On Budget Day, some 400 scribblers and TV teeth-and-hair types were imprisoned in an abandoned hangar at Ottawa airport in the traditional “lockup”—sustained only by parkas and earmuffs, stale muffins and bad coffee. Why? Because tradition dictates that they need hours to read the incomprehensible bafflegab that goes into any finance minister’s speech and cannot be trusted to send off a word of it until the great man himself stands on his hind legs in the Commons and shouts the stuff aloud.

This is nonsense, of course, derived from the days 50 years ago when at Westminster a Labour chancellor of the exchequer, Hugh Dalton, had to resign immediately after he had joked to a reporter about his bad smoking habits on the way into Parliament and the alert hack had news of tough new tobacco taxes on Fleet Street before poor Dalton had got to that point in his speech.

It takes a long time to eradicate nonsense and Martin the Younger knows that. It’s why he has tried to drag the budget process into reality and emulate what a far more democratic nation, the Excited States of America, does in a similar situation.

In Washington, a pre-budget Bill Clinton floats his ideas in public on where he wants to go and what he wants to spend. Every special-interest gang in the land attacks or supports his concept—labor unions, teachers, industry, the pensioners’ lobbyists, the tree-huggers. A Republican-controlled Congress bashes him. Everyone contributes and fully, be obliterated. But don’t count on it.

criticizes, and by the time the budget is finally delivered, every single American who can read or cares knows exactly what the numbers are. To maintain this Dickensian concept in Ottawa—scribes locked in a chilly hangar with inedible food—is as looney as the Charge of the Light Brigade. Martin knows that. It’s why he spent his pre-budget months conferring with stock market types, academics, child poverty experts—anyone he could find who might be affected by what he, vaguely, wanted to do. There ain’t nobody here but us taxpayers.

The nonsense? You will recall the tremendous uproar several years back when some bored clerk leaked budget secrets to Ottawa TV reporter Doug Small and a small army of the fuzz was dispatched to find the miscreant and possibly put the dreadfully dangerous Small in the crowbar hotel.

Students of history will record that the number of Walt Disney’s Mounties sent out to chase this matter to justice was about three times the five RCMP assigned to chase the rumor that a former prime minister of Canada was a crook in the Airbus farce. Only John Cleese, if not Peter Sellers, could conjure this up properly.

4'hat Martin is on the right track (i.e. sanity) was indicated on Budget Day when the CBC, for once taking its balls in its hand, opened its TV presentation of the Martin oratory by telling its viewers the key points of what the finance minister was about to announce.

It marked a clear divide between the nonsense of yesteryear and what will come in the future. 4'he 400 grumblers in the hangar were there because all available space in downtown Ottawa had been previously booked. 44ie government was so embarrassed at being caught between Dickens and today that it then raced the sullen scribblers and pretty faces by bus back to Parliament so as to get the publicity and face-on interviews it wanted.

Ottawa, as we know, is as far removed from reality as Star Wars. So there we have this surreal scene. Hacks that the government despises but needs, being locked in an artificial prison to obey tradition, then being raced to Parliament Hill because the regime needs to get its faces on camera for the evening news to transmit the nonsense that it knows is nonsense. American journalists stationed in Canada by the major U.S. papers look upon this goofy scene as something out of the War of 1812 when soldiers wore brilliant red jackets so their opponents could quickly pick out something to shoot at. 44iey are correct in their assessment.

We have a suggestion for the Ottawa press gallery. Next budget, do a funny thing. Go sit in the press seats over the finance minister’s head and listen to his speech and then leisurely file it off to the employers’ newspapers and television stations.

4'he government would go bananas. Its nonsense of tradition, of traditional “secrecy” would be revealed for what it is. When Martin the Younger becomes prime minister all the subterfuge will, hope- 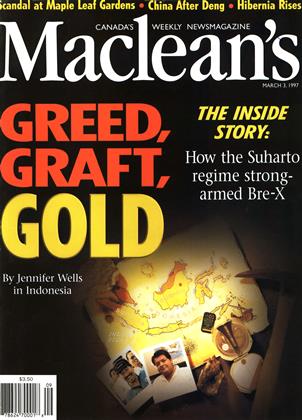