I have to admit, you had me fooled. Recently, you did an article about Calgary that recognized its sophistication and, except for a cheap shot about provincialism, was surprisingly open-minded and fair (“On top of the world,” Cover, Feb. 24). It had none of the Beverly Hillbillies characterization that your magazine usually uses in its infrequent articles about the West. That was until “The fight for Toronto” (Cover, March 17), which featured about 10 pages of boosterism for Toronto in the guise of an article about municipal reform. You even included an embarrassing, stomach-turning essay by Robert Fulford on the greatness of your city (“City of imagination”). Give us a break.

The overwhelming majority of citizens, including myself, who voted No to the megacity wonder if the Mike Harris government itself understands anything about Toronto, local government or the democratic process. The megaplan for a megacity in mega-time does not make sense. In order to keep the promise of a 30-per-cent personal income tax rebate, they are tearing Toronto apart. In the mind of the government, if the citizens are against their stupid plans, they are considered obstructionists, not citizens with informed opinions.

or: 76702.2247@compuserve.com Maclean’s welcomes readers’ views, but letters may be edited for space and clarity. Please supply name, address and daytime telephone number. Submissions may appear in Maclean’s electronic sites.

So, Robert Fulford thinks that the Toronto megacity referendum question was biased. Fulford should read Bill 103 and then tell me if this isn’t a better question: “Are you in favor of a bill that uses three unelected, unaccountable trustees, usurping the power of your elected local governments in Metropolitan Toronto, in order to appoint another group of people known as the transition team who will then, without public input and ignoring all previous study, impose a model of government the shape of which (beyond the number of councillors) is unknown and the financial benefits unproven, to create the new City of Toronto? Yes or No.” That is what Bill 103 does.

Although I’ve resided in Muskoka for more than 50 years, Robert Fulford’s story rekindled fond memories of my 24 years growing up and working in Toronto the Good. For a while in the ’20s, we lived at the Beach adjacent to Kew Gardens when Scarborough Beach Fun Park was still operating. In those days, there were hikes to Fallingbrook, the bluffs, Hogg’s Hollow, the Humber, and the Don Valley, and I received all my schooling during those years. But Fulford is right in suggesting that the proposed changes will benefit the city. As a former clerk/administrator for Muskoka for 36 years, I hope that the Ontario government will carry out their plans and make these badly needed changes.

In “Flocking together" (World, Feb. 110) you mention “the couple” in Florida who were ordered to take down the Canadian flag. My husband and I are “the couple” and I can assure you that, contrary to your article, we did put the flag back up in front of our house. I just couldn’t let everyone think Americans were so bad that we never did fly our flag again. We received so many letters from Americans in support of our flag that, three days after the initial story about us, we decided the least we could do was to hang both the U.S. and Canadian flags side by side. During that very stressful episode last year, my husband and I received so little support from our Canadian neighbors, I wept over it. Americans responded by the hundreds. My phone never stopped. I received calls from Americans as far away as California, and letters—more than 100. Can you imagine how we felt? Raising the American flag alongside ours was the least we could do.

Your recent article on the relaunch of The Ottawa Citizen included the assertion by that newspaper’s former editor that our London Daily Telegraph had succeeded on a formula of “tits and analysis” (“A new, Black Citizen,” Media, March 17). The Daily Telegraph has not published a salacious photograph in its history, which predates editorial photography. It has once again been awarded by its peers the coveted title of “Newspaper of the year” in the United Kingdom as the best-written, best-edited, most interesting and most intelligently entertaining newspaper in that country. On the basis of rumors that Southam is closing its foreign bureaus, I am accused of the colonization of Canadian journalism. We are sharing office space between some of our different newspapers in various foreign cities and the Telegraph service has largely replaced the inferior services of the Guardian and the Observer, for which Southam grossly overpaid. This is not “colonization” of Canadian journalism. This is the enhancement of Canada’s position in the world and the emancipation of its journalism from the parochialists such as those cited by Maclean’s.

I agree with your editorial of Feb. 24 about health-care cuts (“When cuts go too deep”). It must be further noted that the ranks of nurses in Alberta were reduced from 19,000 to 12,000 between 1993 and 1996. Hiring some 1,000 nurses and frontline staff will do little to restore previous patient care standards. Thousands of other women lost their jobs due to Alberta government cuts. This has resulted in an increase in poverty among women and children, which has a serious negative impact on the health of many Albertans.

Regarding “Funny about money” (Opening Notes, Feb 24), if the banks are really concerned about their employees being hurt by parody-style ads, why don’t they eliminate the root of the problem—their own stubbornness, despite record profits, in maintaining service charges and high credit card rates while countless Canadians remain unemployed or have gone bankrupt? Maybe the employees who feel hurt work in the boardroom rather than at the counter.

At best, government responses to child poverty are limited to providing small increases in family bonus or tax credits (“Growing up poor,” Special Report, Feb. 24). I would argue that jobs, not handouts are the solution. The primary role for government should be in the provision of small loans that assist entrepreneurs to develop sustainable businesses. This form of micro-credit has been proven in many parts of the Third World and offers borrowers the dignity and financial benefits of being self-supporting.

I am a single parent and my daughter is “growing up poor,” and I would like people better off than me to stop judging and try living on assistance for a while themselves. They’ll soon realize it isn’t a lifestyle anyone in their right mind would choose. I know all about depression, hopelessness, feeling that my life is a constant worry about money, and wondering what will become of me in the future. Although I am presently unemployed, I have had many jobs over the years, but none of them enabled me to live above the poverty line. I even tried going to

university for a few years, but only succeeded in accruing a huge student loan that I have no idea how I will ever pay back. Meanwhile, my daughter’s father became a doctor. He drives an expensive car and lives in a big fancy house. I’m fed up with these people who have the attitude that I had no right to have my daughter in the first place. Her father and I planned her together. I had no idea I was going to be a single parent. I’m sure many other women in my position didn’t plan on single parenthood either. I’m not as poor as some of the people profiled in your article, thank God, but it’s tough to keep doing without things that most people in this country take for granted.

Could Canadian hand-wringing about the imminent takeover of Canadian culture by Americans be a diversionary tactic? While your cultural mavens wail, your entertainers quietly rise to the top of the charts south of the border. In your Feb. 10 issue, you bemoan the impending demise of the Canadian identity (“Lowering the gate,” Canada), but later in the same issue you state that “Canadian women continue their conquest of the pop-music world” (‘Winners—again,” People). Shania Twain and Alanis Morissette need trucks to cart off the awards they garner in the United States. This is hardly a new phenomenon. Since before the days of “America’s sweetheart,” Mary Pickford (née Gladys Smith of Toronto), Canadians have been at the forefront of American popular culture. Marie Dressier, Paulette Goddard, Glenn Ford, Lome Green, Anne Murray, Hank Snow, Paul Anka, Joni Mitchell—the list goes on and on. The question arises: who’s taking over whom? You are a sly lot. You seem to fly under the cultural radar screens and Americans don’t even realize what is happening. Instead of complaining, Canadians should be celebrating, soberly, of course.

I was appalled to read of the case of Owen Dale Campbell, who at the age of 22 was deported to Jamaica after having lived the past 21 years in Canada (“A trade in criminals,” World, Feb. 17). This person is indeed a product of Canada, and Canada should be taking the responsibility of imprisonment and rehabilitation. Deportation makes sense when someone has recently immigrated to the country, but after 20 years? Sounds to me like passing the buck.

I find it completely absurd that the innocuous message included by Kellogg’s on their boxes of Just Right cereal should be regarded as offensive to our friends in Quebec (“Just Right was just wrong,” Opening Notes, March 10). La Presse columnist Pierre Foglia’s accusation that Kellogg’s is trying to stir up the unity debate is utterly inane. Since when should someone have to apologize for celebrating the things that make Canada a wonderful country? The political climate that has turned a patriotic gesture into an insult is what we should all find offensive.

So the CPP needs a 73-per-cent increase in employee contributions in order to stave off bankruptcy (‘The price of saving the CPP,” Personal Finance, March 10)? Heaven forbid that the federal government would even consider changing the structure of the plan. As a member of the current under-30 workforce, I find it utterly reprehensible to be expected to pay for the comfortable retirements of “the huge bulge of baby boomers” who neglected to do their arithmetic. Why is it viewed as heresy, treason or worse to raise the issue of ending universality in social programs once and for all? To force an entire generation to pay for something for the sake of ideology is illogical and immoral in the extreme.

A call for trust

As a 14-year-old member of the Canadian minor hockey system, I was appalled by your recent story regarding sexual offences in Toronto’s Maple Leaf Gardens (“Grim tales from the Gardens,” Canada,

March 10)—though not in the way that most would expect. Bandying around the good name of hockey and the dedicated volunteers involved is not the way to stop sexual abuse. These people receive no pay, no material rewards and, often, far less recognition than they deserve. A small percentage of doctors undergo malpractice suits, which do not cause the public to abandon their faith in all doctors. However, tales of a few coaches involved in sexual abuse have

engendered a widespread mistrust of several thousand volunteers. Please realize that coaches are an invaluable resource and contribute to the development of children across the country. Realize that a small number of unrelated events should not lead to the condemnation of an entire group. Realize that, once again, paranoia and propaganda have gone too far. 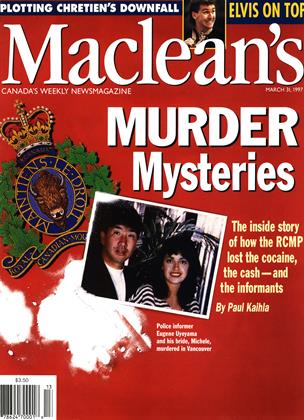