She did not know how to tell her parents. They had a vague idea of what the movie was about. They had even put money into it. But of all the investors backing Kissed-Vancouver director

Lynne Stopkewich’s startling feature debut—her parents were the only ones who had not seen the screenplay. “I was terrified that they would freak out over it,” says Stopkewich, “that they’d think I’d finally lost it.” In fact, it took the director 2½ years before she could finally bring herself to tell them that the movie they had supported is a glowing portrayal of a female necrophile.

Just before the first press screening of Kissed at last year’s Toronto International Film Festival, the filmmaker called her parents’ home in Montreal. Her mother picked up the phone. “I said, ‘Mom, put Dad on the line,’ ” recalls Stopkewich. “ ‘Now’s the time for me to

tell you about the movie____It’s about this girl who gets

a job in a funeral home and falls in love with some of the corpses ... and has sexual relations with them.’ ” The director laughs. “I’d never used the term ‘sexual relations’ before in my life. There was this big pause at the other end. Then, I jumped in and started listing all the government agencies supporting the project and saying it’s based on a story by Barbara Gowdy, who’s this real-

When Walter and Emily Stopkewich, who run a Montreal autoparts distribution centre, finally saw their daughter’s film, “my Mom came out of the theatre with tears in her eyes,” the director recalls. “She thought it was beautifully done. And my Dad was ecstatic.” Stopkewich’s parents are not the only ones seduced by the unlikely charm of Kissed. Since its première last fall at the Toronto film

festival, the movie (being released in both Canada and the United States this week), has received rave reviews. Stopkewich, 33, has been deluged with scripts and offers from the major studios. And the film’s Toronto-based star,

24-year-old Molly Parker, is suddenly in hot demand. Presumably, any actress who can create a tender, graceful and

empathetic portrait of a woman who has sex with corpses is capable of just about anything Hollywood can throw at her.

Kissed is no blockbuster. But it is remarkable that a small Canadian film, with such a potentially off-putting subject, should be generating so much heat. Stopkewich based her script on the title story of Gowdy’s 1992 collection We So Seldom Look on Love, which was inspired by the true tale of a young California woman caught in flagrante delicto with a fresh male cadaver in the 1970s. “She had stolen the hearse and was caught lying in the coffin making love to the occupant,” recalls the Toronto author. “She was very beautiful— it wasn’t as if she couldn’t get a date. She preferred dead men.”

In creating her fictional necrophile, adds Gowdy, “I tried to get past my own repulsion and figure out why she’d do it. While it does repulse me, I don’t find the behavior reprehensible. The men are dead, and there may be dead men who would welcome it. And she was not creepy. She wasn’t cutting the bodies to pieces, she was worshipping them.” But, describing her story as “a contemplative piece, an ironic contemplation of what it means to love death and dead men,” Gowdy says she was skeptical that it would work on film. “I didn’t think it

could be done, but Lynne pulled it off.” Stopkewich was working on another script when she first read Gowdy’s story. “I couldn’t get it out of my mind,” she recalls. “It started to interfere with my writing process. I really liked the character’s voice, and the fact that there’s no judgment. That unapologetic existence was really interesting to me.”

Directing with exquisite precision, Stopkewich achieves a delicacy reminiscent of Gowdy’s prose. Although her camera does not shy away from the story’s eroticism—she shows the necrophile dancing naked and straddling a corpse—somehow the dramatic tension never topples into sleaze or unintentional humor. Although Kissed may sound like another Crash, a Canadian movie defying sexual taboos, it is not terribly shocking or disturbing. In fact, it is eerily tasteful.

The slender narrative begins with scenes of the heroine as a child, a sweet young girl (Natasha Morley) who conducts fastidious funerals for small animals such as birds and chipmunks. As a young adult, Sandra (Parker) is still enamored of death. So she becomes

an apprentice embalmer and lands a job at the local funeral parlor, where a ghoulish mortician named Wallis Qay Brazeau) gives her deadpan lessons in evacuating bodily fluids with a sword-like device called a trocar. Alone in the prep room one night, Sandra makes love to a corpse for the first time, and she embraces death with a poetic rapture. “It was like diving into a lake—sudden cold and silence,” she says. “My hands burned like I was touching dry ice, and all I could see was the light. I looked right into it.”

Soon Sandra is stealing into the funeral home at night on a habitual basis, offering herself only to young, good-looking, dead white males. Meanwhile, in the outside world, she meets a live one, a lonely medical student named Matt (Peter Outerbridge) who becomes

her first partner with a pulse.

Sandra confesses her secret to him early on, but instead of being repelled by it, he takes a voyeuristic interest. He wants details. He wants to take part.

And that infuriates Sandra, whose obsession is not about kinky sex but spiritual transcendence, or what she calls “crossing over.” Matt, however, is madly in love with her and is determined to cross over in his own fashion.

Outerbridge does a credible job of fleshing out a character who was just a shadowy presence in the original story.

But the movie belongs to Parker, who delivers a truly mesmerizing performance. In many scenes she is acting

alone, without dialogue, and the camera adores her. With a gently freckled complexion and wide eyes that magnify every flicker of thought, she has an unusual, lucid beauty. The role is an extremely risky one, requiring her to be naked, emotionally and physically, in a love scene for which there is no precedent.

“I knew that Lynne would deal with it in a tasteful and respectful manner,” Parker told Maclean’s in a recent interview. “But it was really the first love scene I’d ever done, and I had to play it alone. It’s one thing to be with another actor, where you can both be awkward or embarrassed together. But to do it alone feels masturbatory in a sense.” They shot the scene on a small closed set with just five crew,

she recalls. ‘We had this squeaky old dolly following me around the gurney, with the camera guys pushing it and Lynne running behind them. All I could hear was this squeaking, and these little padding footsteps. I stopped and just burst into hysterics.” Parker’s solution was to put on some music, a Sarah McLachlan song, which “we played really loud over and over again for 16 hours while we shot the scene.”

Stopkewich says she, too, was anxious about shooting the sex. “It’s very difficult when you know you’re going to have full frontal nudity,” she says, “and you’re a female director, and you’re very conscious of how women are represented in film.” But the Montrealborn director, who has a master’s degree in film from the Universi-

ty of British Columbia, found comfort in simple details, such as a shot of Parker’s hand gripping the cold steel gurney. “I also tried to be confrontational with the subject without turning her into an object,” explains Stopkewich. “She’s crawling towards the camera, and at the height of her orgasm, she’s looking right into the lens—into the audience. And I burn to white so the theatre is filled with light, and you can look around and see how people are reacting.”

Stopkewich says she has never met a real necrophile. Initially, she tried to research the subject but had trouble finding any information. “I

was more interested in the character, and the challenge of making her interior world accessible in such an exterior medium,” she says. “I tried to find things that were common to my experience—growing up in the suburbs, dealing with questions of sex and death, your first date, your first sexual experience.” She adds, laughing: “I didn’t want her to be a spokesmodel for all necrophiles.”

The director did, however, visit a funeral home before the shoot. It was the first time she had seen a dead body. “I went into the prep room,” she recalls, “and there was a guy laid out on a gurney, embalmed and wearing a suit. I was really startled because he was young, and I realized this is exactly the kind of guy that Sandra would

be interested in. I could have reached out and touched him, but I didn’t. It was like fiction and reality came crashing together. I had this overwhelming nausea. I had to run out of the building to get some air.”

The director attributes her reaction to “the realization of what I was embarking on and how public that would be—I certainly never imagined it would be this public. I thought the film would go to festivals and sell somewhere in Europe and that would be it.” Kissed cost under $1 million to shoot. Stopkewich, her livein companion, Vancouver film-maker John Pozer, and Peter Roeck spent two years editing it on old-fashioned equipment. And now, with its director discussing necrophilia on such outlets as CNN, the movie is scheduled to open in five U.S. cities.

As Stopkewich wades through Hollywood scripts,

there are plans for her to direct a feature based on Gowdy’s latest novel, Mr. Sandman. Meanwhile, Gowdy herself is getting some buzz from the film. Her

American publisher has printed a paperback of We So Seldom Look on Love, using a photograph from the movie on the cover. “It’s a couple kissing,” says Gowdy. “It’s funny. It’s not unlike The English Patient, although in this case, the man is a little more pale.” □ 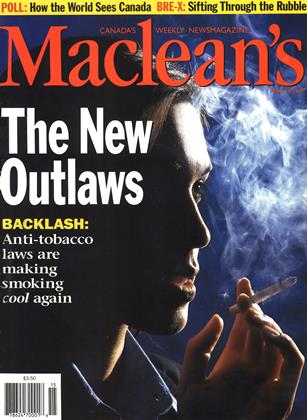