In 1988, singer Elton John (left) auctioned off all the outrageous costumes that had been his trademark. But a fella has to attend his 50th-birthday bash in style— and so John did in London late last month.

Throughout her life, Pat Capponi has moved between two vastly different worlds. As a mental patient, she was on the margins of society. Then, with the 1992 publication of her wrenching yet riveting memoir, Upstairs in the Crazy House: The Life of a Psychiatric Survivor, Capponi was suddenly an acclaimed author. But celebrity did not keep her from poverty and its stigma and once again she found herself on the fringes. Believing that things were only getting worse for the poor in Ontario under Mike Harris’s Tory government, she began keeping a journal of the indignities she faced. After an excerpt appeared in a Toronto weekly, Penguin Books Canada commissioned a book. With Dispatches From the Poverty Line, Capponi, 47, once again shows that she can turn a tough tale into a good read. But she hopes her new book will do more: “I want to counter the weird propaganda about the poor. Then people won’t have to be ashamed of how they’re living.”

There was pure joy at Memorial Auditorium in Kitchener, Ont., after Canada defeated the United States in sudden-death overtime to win the World Women’s Hockey Championship on April 6. But even as the players celebrated and the fans cheered, Canadian Hockey officials were already making plans for the 1998 Winter Olympics in Nagano, Japan. They have an easy choice for head coach: Shannon Miller, 33, who took a leave from the Calgary police force to guide this year’s team. The tough job will be staying on top, says Glynis Peters, manager of women’s programs for Canadian Hockey. “The Americans are going to be really hungry for gold,” says Peters, “and they are going to do everything they can to beat us.”

At home on the ward

Three years ago, Canadian country singer Paul Brandt was working as a pediatric nurse in a Calgary hospital, changing bedpans and monitoring IV drips. Now, he is recording his second CD in Nashville, Tenn., where he has lived for the last 15 months. Brandt’s first CD, The Calm Before the Storm, was an overwhelming success, selling more than 700,000 copies in North America and spawning two Top 5 hits on Billboard's country charts in 1996, My Heart Has a History and I Do. But while his music career has taken him away from nursing, the 24-year-old singer says he is still inspired by his former patients. ‘When you see these kids who are dealing with pain, fear and uncertainty every day,” says Brandt, “and they are still full of the love of life, you start to look at things a little differently.”

A love story with Harvard

It is, says David Johnston, “one more chapter in a wonderful love affair with a place that to me is more like a person than an institution.” Last week, the former principal of McGill University in Montreal became the first nonAmerican to be named to Harvard University’s board of overseers. Johnston was a high-school student in Sault Ste. Marie, Ont., when he accepted an offer to be in Harvard’s Class of ’63. But although his relationship with the Cambridge, Mass., university continues to evolve, his place in its history was immortalized long ago. An All-American hockey player who was also on the school’s football team, Johnston often went jogging with a classics professor named Eric Segal, who went on to write a best-selling novel called Love Story—that included a minor character based on Johnston. 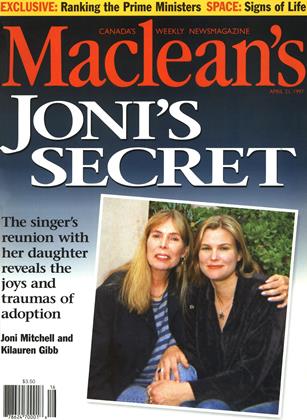